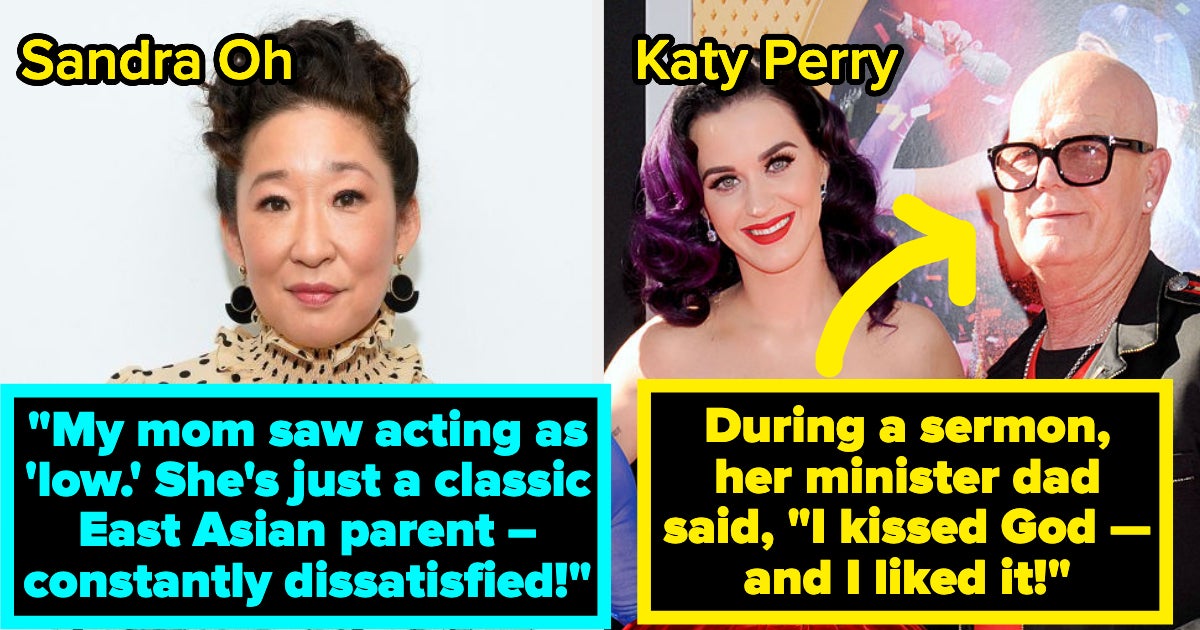 Growing up, the actor and his parents constantly butted heads over their cultural and academic expectations. After graduating from business school, Simu became an accountant — which made his parents proud — but was laid off eight months later. He took the opportunity to pursue an acting career, and his relationship with his folks deteriorated.

It wasn’t until he landed his first major role on Kim’s Convenience that they started to repair their relationship. For his mom’s 60th birthday, Simu wrote a heartfelt, eight-page letter, which led to some healing conversations. “It was the first time we really talked about those issues,” he told People. “We both acknowledged that we were flawed human beings trying to do our best.”

When she dropped out of college to pursue her dreams, her parents were deeply upset. According to E News!, they told her it was “really stupid” and “no Latinos did that.” During an interview with W Magazine, Jennifer said, “My mom and I butted heads. I didn’t want to go to college — I wanted to try and dance full-time. So she and I had a break.”

“I started sleeping on the sofa in the dance studio. I was homeless, but I told her, ‘This is what I have to do.’ A few months later, I landed a job dancing in Europe. When I got back, I booked In Living Color. I became a Fly Girl and moved to LA. It all happened in a year.”

After she graduated from Oxford with a law degree, she turned down an opportunity with a law firm to study acting at the Drama Centre London. Her parents didn’t approve of this decision; Gemma and her father didn’t speak for months. “I completely understand why they were fearful and upset because I don’t come from a show-biz family,” Gemma told Allure. “We have no connections to anyone in the business.”

“My dad said to me, ‘It doesn’t matter how good you are, how talented you are, you’re not going to find enough work.’ I finished drama school 10 years ago now, so I’ve been working for 10 years. But back then, there really weren’t that many Asian faces on stage or screen in the UK.”

During an interview with Glamour, she said, “When I told my parents when I was 14 that I wanted to move to New York and become an actress, they were like, ‘Well, no. Obviously.’ And I just wouldn’t shut up about it. I had already saved up babysitting money. So I was like, ‘I’m going.’ I’ve always been a real stickler with money. I wouldn’t buy things from the concession stand. I never knew what I was saving for until New York hit my mind. And then I was like, ‘That’s what I’ve been saving for. I’m going.'”

“And they were like, ‘Well, we don’t want her to die.’ [So] my brother came with me. But they were like, ‘You can try it for the summer, and then you have to come back and finish school.’ My mom always says she wanted me to fail so that I could come home, because not failing meant me being in New York. She lost a daughter, really, at 14.”

The son of Rocky “Soul Man” Johnson — a famous wrestler who was inducted into the WWE Hall of Fame — Dwayne wanted to follow in his father’s footsteps, but his old man disapproved. During an interview with Today, The Rock said, “We had the biggest fight between a father and a son over this. He said, ‘Look around. Look what I have after all these years, and I want more for you.’ And I said, ‘I know, and I appreciate that, but I feel like I have something to offer.’ And we fought and fought and fought.”

Daniel’s father was a doctor, and his parents wanted him to pursue a traditional career path of a doctor, lawyer, or banker. But Daniel took an acting class in college that changed everything. “Something changed in me,” he told NBC News. “So I took as many acting courses as I could, and I pursued an independent major in acting at a local neighboring college because my college didn’t have an acting major. After that, when all of my friends were joining places like Goldman Sachs and Morgan Stanley, I bucked the trend and ended up going to New York to act.”

“It was really difficult the first few years,” he continued. “My parents worried about me. I think at the heart of our conflict at the time was the fear that their son wouldn’t be able to make a living in his chosen profession and wouldn’t be able to do all the things a son is supposed to be able to do like get married, have kids, and support the parents when they get older — that vision that many Asian immigrant parents have for their children.”

The daughter of minister parents, she grew up in a strict household and told Vanity Fair that she wasn’t allowed to listen to secular music or say the words “deviled eggs.” She started out as a Christian singer but quickly turned to pop, which her parents disapproved of. They were deeply upset when she released “I Kissed A Girl.” During a sermon, her father told the congregation, “I kissed God — and I liked it!”

“I think sometimes when children grow up, their parents grow up,” Katy said. “Mine grew up with me. We coexist. I don’t try to change them anymore, and I don’t think they try to change me. We agree to disagree.”

During an interview with USA Today, Kerry revealed that her mother was unhappy when she told her she was pursuing an acting career. In fact, her mom burst into tears and began sobbing. Kerry also told The Guardian, “My mother’s nightmare was for me to be a starving actress. She felt, life is hard enough for you as a woman, as a person of color; why would you take on this additional struggle?”

While attending UCLA, he started a theatre company on campus, which his parents didn’t mind as it was “for fun.” But they weren’t happy when he decided to seriously pursue acting after graduation. “My mom actually worked at UCLA…and she would hear first-hand stories about how hard it was,” he said at a USC event. “And she would tell me, especially as an Asian person, how impossible it would be. And she was right, it was really hard.”

However, in hindsight, Randall appreciates the financial support his parents offered. “I say my parents didn’t support my career, but with the perspective I have now, they really supported me during my pursuit of this career because they housed me, they fed me sometimes, and maybe did my laundry here and there.”

On an episode of The Howard Stern Show, Steve shared that his father was critical of his acting career. After one of Steve’s movie premieres, he and his parents went to dinner, where his mom asked his dad for his thoughts on the movie. His father simply said, “Well, he’s no Charlie Chaplin.” After Steve hosted Saturday Night Live for the first time, his father wrote a negative review of his son in a newsletter, insisting that the SNL appearance didn’t help Steve’s career.

Despite having Julia Roberts for an aunt and Eric Roberts as a dad, Emma revealed that her mother didn’t want her to step into the spotlight. During an interview with Elle Canada, Emma said, “[My mom] just didn’t want me to go into it young. When you come from a family that’s in the industry, they’re always like, ‘Be a doctor! Be a lawyer!’ But we end up wanting to be actors.”

On an episode of Jimmy Kimmel Live!, she said, “I called my dad to tell him I was quitting college to become a comedian, and he was like, ‘Eddie Murphy? Eddie Murphy ain’t even Eddie Murphy. Diane, get on the phone and tell this girl she ain’t funny. You ain’t funny! You ain’t never made me laugh. Ever!'”

During an interview with the Sunday Times’ Style Magazine, she said, “My mom saw acting as ‘low’, that was her thinking coming from Korea. She’s just a classic East Asian parent – constantly dissatisfied! But not being satisfied gives you drive, it’s not bad.”

When he moved to California to pursue acting rather than become an engineer, his mother didn’t support his decision. Ross told Paper that his mom viewed acting “as insecure and frivolous and not a way [he] could support [himself.]” They didn’t speak for several years. He shared that he often asked himself, “How do I make my dreams fit into the Asian cultural dream? How do I make these two worlds meet?”

He wished that he’d been allowed to pursue creative endeavors growing up, saying, “I think the problem isn’t necessarily the decision to go into the arts. The problem is allowing Asian American kids to be creative at a younger age so that a choice down this path doesn’t seem so radical or out of the ordinary. Because if I had started earlier, I can’t speak to how history would have changed, but the transition may have been earlier.”

Know any other actors whose parents didn’t initially support their careers? LMK in the comments below!

Keep up with the latest daily buzz with the BuzzFeed Daily newsletter!