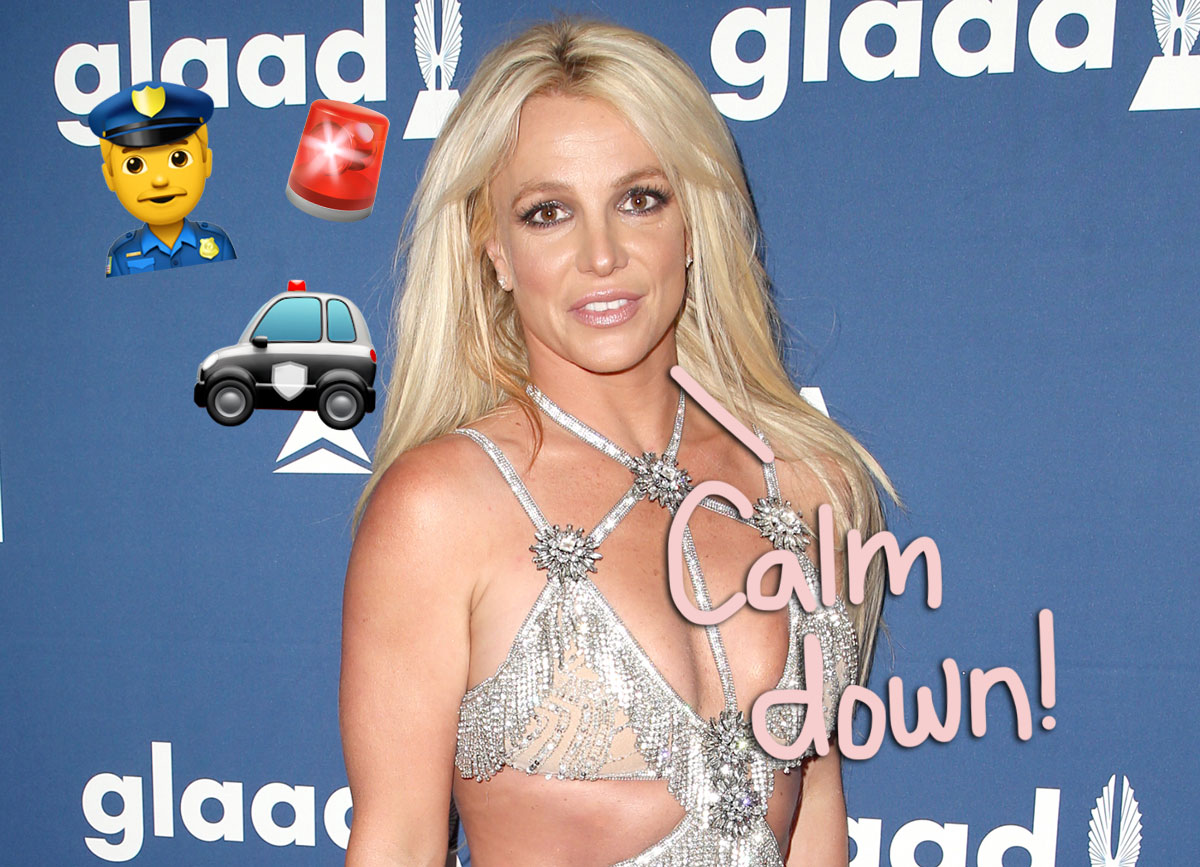 Wow! Fans were seriously worried about Britney Spears’ after she deleted Instagram this week — so they called the cops on her?!

The Princess of Pop notably deactivated her Instagram at some point in the last 12 hours, which isn’t really anything new for her. In fact, it’s the seventh time she’s signed off in less than a year. But for whatever reason, fans were particularly on edge this time around, and they took action.

Law enforcement sources opened up about the peculiar 911 calls that flooded one California police department on Wednesday. Speaking to TMZ, they explained fans felt Britney deleting her account meant she was in trouble, so they called the Ventura County Sheriff’s Office. Deputies were then sent out to Britney’s home in Thousand Oaks (her old pad, not her new one, for the record) where they determined there was no reason to be concerned. It’s unclear if the cops actually spoke to or saw Britney or if they just met with someone else on-site who reassured them everything was fine. But either way, they left without any further action needed.

Over on Page Six, a police spokesperson opened up further about the incident — and their cryptic responses are sure to raise even more questions among the Britney Army conspiracy theorists! The officer dished:

The officer would not disclose how many calls they received or how they determined the 41-year-old was safe — because it’s nobody’s business! He added:

“It’s just a privacy thing for the residents in our county. It’s a public trust issue. We just don’t disclose those kinds of things [such as wellness checks]. It’s not a crime.”

Perhaps letting slip what the phone calls were about, the official concluded:

“We don’t really talk about any kind of mental health issues or anything like that. I can’t confirm or deny that deputies went to her house, but we don’t believe that Britney Spears is in any kind of harm or danger at this point.”

The fans who supposedly made the calls to the police had no qualms about making their concerns public, though, taking to TikTok on Tuesday to livestream their wellness check requests. In one video, one person said during a call in a since-deleted post:

“I was calling because I am worried about the physical safety of a resident in your area.”

When asked why they wanted the check done, the fan noted:

“There’s been suspicious activity online and now her account has been deleted.”

We guess it’s good the police took action, but, is deleting her account — something she’s done repeatedly in the last few months — seriously cause for concern? Or are her fans just reading into everything a bit too much??

For what it’s worth, the star did release a string of unusual posts before signing off. In one of her most recent uploads shared on Tuesday, she said it “sucks to be me” before complaining:

“Giving someone I love my everything only gives me the dagger in my heart !!!”

“Rational people… I had one of these and it disappeared!!! I could sit back and be like MOST and not give anyone anything to think about on Instagram… But interest is what serves most and being good!!!”

This, of course, led some to wonder if she’s having marital problems. Then there was the post in which she declared she’d changed her name to River Red, saying in part on Sunday:

“A bright one … easy does it !!! Thank you, childhood friend, I found my ball … don’t underestimate the power of purity !!! I see right through it all … it has liquid and is wet … it’s playful and has mass !!! I changed my name to River Red!!! Yet the fire is where it illuminates … to stare at it and jump right in with no fear at all !!!!”

And all of this comes nearly two weeks after she was blasted for talking gibberish and acting “manic” at an El Lay restaurant while out to dinner with her actor hubby. Things got so bad, he reportedly “stormed out” — but this may not be the full story. The couple quickly clapped back at the reports, insisting Britney was merely upset other patrons were filming her while she was trying to enjoy a night out, which is why she attempted to shield her face with a menu. Sam told TMZ he simply went to get his car and didn’t storm out of the establishment. Still, the outing raised concerns, and we guess the latest social media activity was enough for Brit’s die-hards to take action.

We’re glad to know Brit wasn’t in any trouble, though we’re sure it was pretty startling for everyone at the residence to see the police pull up just because she decided to take a break from social media! Like, what the heck?

It’s no secret the Toxic vocalist’s supporters are deeply loyal, and they’ve been weary about those in the star’s inner circle for years due to her now-terminated conservatorship. But this really seems like crossing the line! They may think they know what’s going on in the Crossroad alum’s life, but only those actually in her life know — and they should be the ones taking such drastic measures like calling the cops if they think it’s necessary. We don’t need the fans creating a “boy who cried wolf” situation here. But, honestly, it seems like nothing is going to convince the #FreeBritney Movement that she’s safe; not even the conservatorship ending was enough to calm their fears.

Do you think Britney’s fans went too far? Or did they do the right thing? Sound OFF (below)!