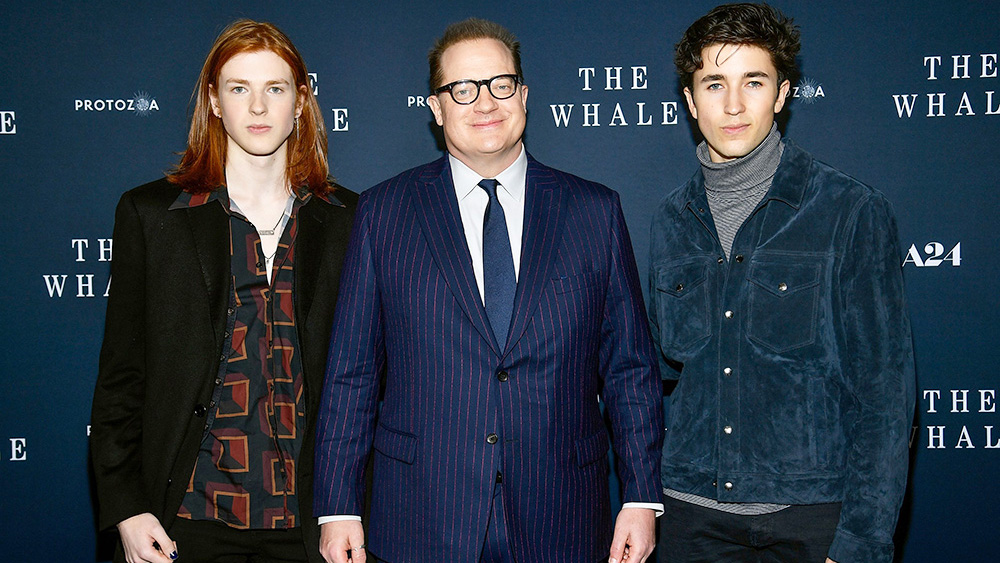 “Having kids makes your life better, plain and simple,” Brendan Fraser told Redbook in 2008. Though Brendan has faced many highs and lows, he’s always had three people by his side: his sons, Griffin Fraser, Holden Fraser, and Leland Fraser. With Brendan appearing at screenings in 2022 – for his comeback feature, The Whale, directed by Darren Aronofsky – the world is getting reacquainted with the former 90s heartthrob and the children he’s helped raise.

Brendan Fraser shares his sons with his ex-wife Afton Smith. Brendan and Afton (a former actress turned writer) were married from 1998 to 2008. In 2018, Brendan told GQ that his sons live with their mother in Greenwich, Connecticut, a short distance from his home in Bedford, New York. “They’re here all the time,” he said. Here’s what you need to know about Brendan Fraser’s sons.

Griffin Arthur Fraser was born in 2002. “Griffin’s rated on the autism spectrum,” Brendan said in a 2018 interview with GQ. “Um, and so he needs extra love in the world, and he gets it. And his brothers, ever since they were small, one was always the spokesperson, and the other was the enforcer.”

Griffin, according to his father, is “a curative on everyone who meets him, I noticed. People have some rough edges to them. Or he just makes them, I don’t know…put things into sharper relief and maybe find a way to have a little bit more compassion. They don’t put themselves first so much around him.”

Brendan spoke more about his eldest son in an Interview magazine chat with Freddie Prinze Jr. “I have three kids of my own. My oldest son Griffin has special needs. He’s autistic. He just turned 20. He’s a big kid. He’s six foot five. He’s got big hands and feet, a big body. I understand intimately what it is to be close to a person who lives with obesity. And because of the beauty of his spectrum—call it a disorder if you will, I disagree with you—he knows nothing of irony.

“He doesn’t know what cynicism is,” continued Fraser. “You can’t insult him. He can’t insult you. He’s the happiest person and is, in my life and many others’, also the manifestation of love. Being with my kids, their mom, and our family has given me such love that if ever I needed to hold something of value up to try and translate that to what was important to [Brendan’s character in The Whale] Charlie, I didn’t have to look far.”

Robin Roberts’ Wife Amber Laign: All About Their Romance & Life Together

Holden Fletcher Fraser was born in 2004. He accompanied Brendan to a New York City screening of The Whale in November 2022 and was already taller than his famous father.

In 2008, Brendan told Redbook about something Holden said. “The other day, when my 4-year-old saw a flowering tree and said, ‘Daddy, it’s raining petals,’” said Fraser. “That was poetry that just melted my heart into a mushy, yummy Fudgsicle.”

At the time, the Fraser children didn’t know anything about Brendan’s career. “They don’t know,” he told Redbook. “They’re 5, 4, and 2, so they’re more into SpongeBob SquarePants. When I say I’m going to work and they ask what that means, I’ll show them a picture of me flying through the air with a monster. They’ll say, ‘Cool,’ and that’s it. To them, I’m just the guy who brings them Pirate Booty when they’re hungry.”

Leland Francis Fraser was born in 2006, making him the youngest. Like his brothers, Leland has grown up out of the public eye.

Brendan described Leland as a “professional fireplug” during a 2010 appearance on The Rachel Ray Show, per PEOPLE. “He goes through brushes and briers and comes out on the other side scratched and smiling. It’s all good!”

Fraser also spoke about how he’s devoted to his children in a 2010 interview with Parade magazine. “I always hug and kiss them whether they like it or not. I’m like, ‘Come here, you,’ and you blow raspberries on them. That’s what I do.”

“It makes my heart stop beating for a moment to think it were true that my children might be in any kind of jeopardy,” he added. “I mean, it really frightens me. Of course, I would do whatever it takes to save them. What parent wouldn’t? I’d throw myself in front of a train if I had to for their well-being. That doesn’t mean you can protect them from everything, but you have to try.”