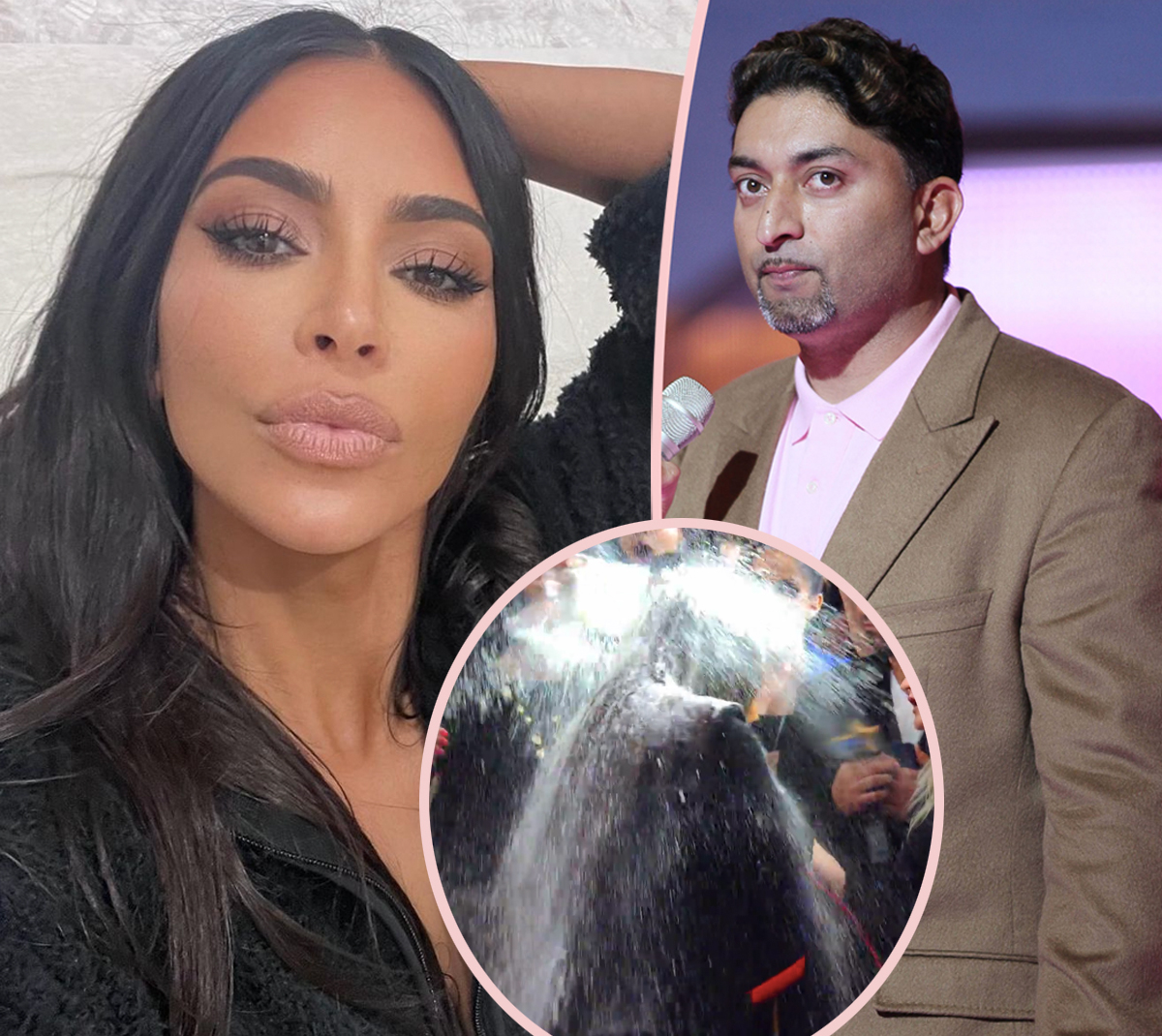 It’s no secret Kim Kardashian is willing to do anything to get her name in the headlines – even if it means getting flour bombed in front of everyone!

If you don’t recall, way back in 2012, the reality star was walking the red carpet as part of her launch for the perfume True Reflection at the London Hotel in West Hollywood, California. She was doing her usual thing, talking to reporters, etc., when all of a sudden someone covered her long black hair and outfit in FLOUR (above right, inset)! The assailant, Christina Cho, reportedly yelled out “fur hag” during the moment, leading Kim to speculate the flour attack was organized by an anti-fur demonstrator. She explained on season 7 of Keeping Up With the Kardashians:

“So I’m doing the red carpet and all of a sudden I get this powder all over me and I’m so shocked. Now I’ve definitely experienced my fair share of haters, but I don’t want to ruin the night just because this anti-fur organization tried to ruin our event with this flour bomb.”

Related: Sheryl Lee Ralph Shades The Kardashians Who Paid ‘$10,000’ For Lips Like Hers!

After the incident, Kim cleaned up in a private room before stepping back onto the carpet and finishing her appearance. Meanwhile, Christina was reportedly detained by staff members at the hotel until police arrived, but the television personality opted not to press charges. PETA – the organization the woman allegedly was a member of – denied being responsible for the incident, saying to TMZ at the time:

“It was not [us]. We were given the video by an anti-fur activist on the scene. PETA has tried everything from polite letters to public protests, but Kim Kardashian has not been moved by the news that animals are beaten, electrocuted, and even skinned alive for real fur garments. Whoever threw that flour may reach her when our polite appeals did not.”

Well, it turns out PETA really did have nothing to do with it, because Sheeraz Hasan, a PR expert who worked with Kim starting in 2005, claims the whole thing was staged! According to the British Channel 4 documentary The Kardashians: Billion Dollar Dynasty, he shared how the incident was an orchestrated “media moment.” Apparently, there were “discussions” with the reality star and her team, and she was “willing to get flour bombed” before the launch event to drum up more press. He said he told Kim at the time:

However, sources “close to the situation” denied Sheeraz’s claims to The New York Post, saying Kim never knew about the PR move and blamed PETA. In response to the bombshell accusation, the animal rights organization told the outlet:

“Perhaps the bigger reveal is that Kim’s assistant is a secret PETA member? We may never know, but we do know that Kim’s now fur-free, and that’s what really matters to us and to the animals she’s preventing from being caged, tortured and electrocuted for fur.”

You have to wonder what other moments were elaborate schemes by the Kardashian-Jenner family! Reactions, Perezcious readers? Sound OFF in the comments section!

[Image via WENN, Keeping Up With the Kardashians/Peacock, Kim Kardashian/Instagram]