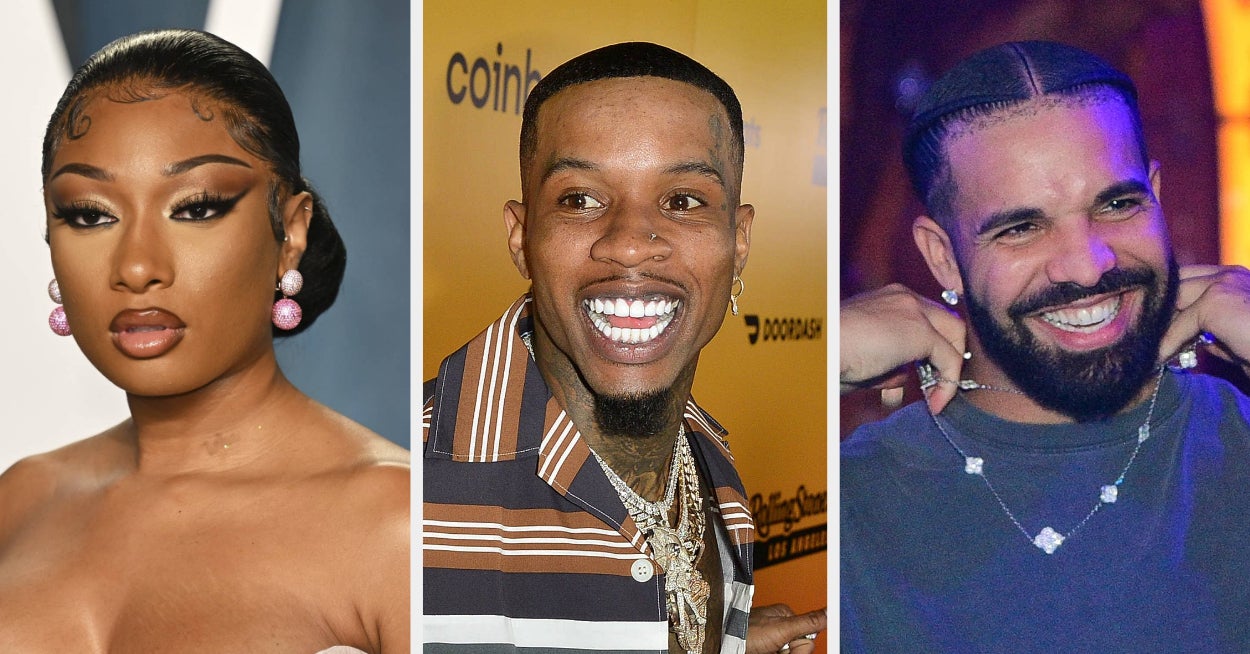 Megan claimed that the crime, which occurred after a pool party at Kylie Jenner’s house, was committed by Tory Lanez in an attempt to “physically harm” her following an argument they’d had.

She later shared a graphic photo of her gunshot wound in response to critics who accused her of lying about the incident. “Why would I lie abt being shot?” she wrote.

But Megan only faced more criticism — as well as heaps of mockery — from several internet users, many of whom were fans of Tory. She eventually opened up about being painted as the “villain” in a heartbreaking interview in June, during which she questioned whether her appearance had anything to do with people’s unwillingness to believe her.

“In some kind of way, I became the villain. And I don’t know if people don’t take it seriously because I seem strong,” she said.

“I wonder if it’s because of the way I look. Is it because I’m not light enough? Is it that I’m not white enough? Am I not the shape? The height? Because I’m not petite?” she went on. “Do I not seem like I’m worth being treated like a woman?”

Tory, who has denied the allegations against him, was officially charged with felony assault against Megan in October 2020. His trial was postponed to December, and now that it’s underway, the rapper is facing three felony charges: assault with a semi-automatic firearm, possession of an unregistered firearm, and negligent discharge of a firearm.

Tory has pleaded not guilty to all three charges. If convicted, he could face up to 22 years in prison, as well as possible deportation back to Canada.

During Megan’s emotional testimony, she broke down in tears as she recalled seeing cruel messages about herself online from critics since the incident occurred, some of whom said she deserved to be shot.

“I can’t believe I have to come here and do this,” she said.

Going on to detail the impact it’s had on her mental health, Megan said she wished Tory would’ve “killed” her if it meant she’d avoid the “torture” she’s been through since.

“I can’t even be happy,” she said. “I wish he would have shot and killed me if I knew I had to go through this torture.”

“I can’t hold conversations with people for a long time. I don’t feel like I want to be on this Earth,” she continued.

Megan was later asked about changing her story on the night of the shooting when she was initially questioned by police officers. She firstly said she’d stepped in glass before eventually claiming Tory had shot her, and explained that this was because she doesn’t “feel safe with the police,” nor does she feel that women are “believed when they speak out.”

“I don’t feel safe with the police,” she said in tears. “In the Black community — in my community — it’s not really acceptable to be cooperating with police officers.” Megan added that her deep-rooted distrust of cops was only exacerbated by George Floyd’s murder in May 2020, and the Black Lives Matter protests that followed.

And Megan went on to describe how she’s been “turned into some kind of villain” by the public since the incident, with several rappers in the industry — in what she described as a “big boy’s club” — now hateful towards her, too.

“This situation has only been worse for me and it has only made him more famous,” she said. “Because I was shot, I’ve been turned into some kind of villain, and he’s the victim. This has messed up my whole life … This whole situation in the industry is like a big boy’s club … I’m telling on one of y’all friends, now you’re all about to hate me.”

“This bitch lie ‘bout getting shot but she still a stallion / She don’t even get the joke but she still smiling,” Drake raps in “Circo Loco.”

In response, Megan tweeted: “I know I’m very popular but y’all gotta stop attaching weak ass conspiracy theories in bars to my name… Stop using my shooting for clout bitch ass Niggas! Since when tf is it cool to joke abt women getting shot !”

“You niggas especially RAP NIGGAS ARE LAME! Ready to boycott bout shoes and clothes but dog pile on a black woman when she say one of y’all homeboys abused her,” she continued.

“And when the mf facts come out remember all y’all hoe ass favorite rappers that stood behind a Nigga that SHOT A FEMALE,” she added. “People attack me y’all go up for it , i defend myself now I’m doing too much … every time it never ends and this did NOT happen until I came out and said I got shot … y’all don’t fwm okay cool fuck it bye.”

Several internet users slammed Drake and 21 Savage for fueling claims that Megan had lied about the shooting and “making jabs at her trauma.”

“The shitty thing is that Tory did not have this much support and clout before the shooting,” one Reddit user said. “The fact that he shot a successful black woman is why he’s getting all these features and shout outs from different celebs.”

Now, Megan’s latest testimony has only sparked a wider discussion about misogynoir, which is the ingrained prejudice against Black women, with many concluding that “Black women are never believed.”

“This is how misogynoir harms us,” one person wrote, quoting Megan’s testimony. “If a famous Black woman wants to die after being assaulted, none of us are OK.”

“They cannot fathom a Black woman being abused. It’s all rooted in misogynoir,” said another. “In the eyes of society, black women are not victims. They can’t be. They are the aggressors. They are the problem. She must’ve done SOMETHING to deserve getting shot. OR she’s just straight up lying.”

A third user added, “What happened to Megan is absolutely horrific, reading the account of the situation in her own words just… The Misogynoir is so evident.”

What’s more, fans later drew comparisons between the way Megan and Tory were treated by bystanders as they separately entered the courtroom.

Video footage showing Megan rampantly being accused of lying by paparazzi and then immediately catcalled was quickly labeled “disgusting to watch” by Twitter users.

“‘you look good in that purple’ being preceded by ‘megan, why you lying on that boy?’ is exactly what misogynoir, patriarchy, and rape culture look like in real time. he is literally cat calling her while simultaneously clearly stating he doesn’t believe she’s a victim,” one person said.

In stark contrast, Tory — who entered with his 6-year-old son, who has no involvement in the trial — was showered with compliments by the same people who harassed Megan.

Pointing out the difference, one Twitter user wrote: “in contrast, the video of tory walking in has men lined up to dap him up, tell him they love him, and that he ‘looks fresh as a million bucks.’”