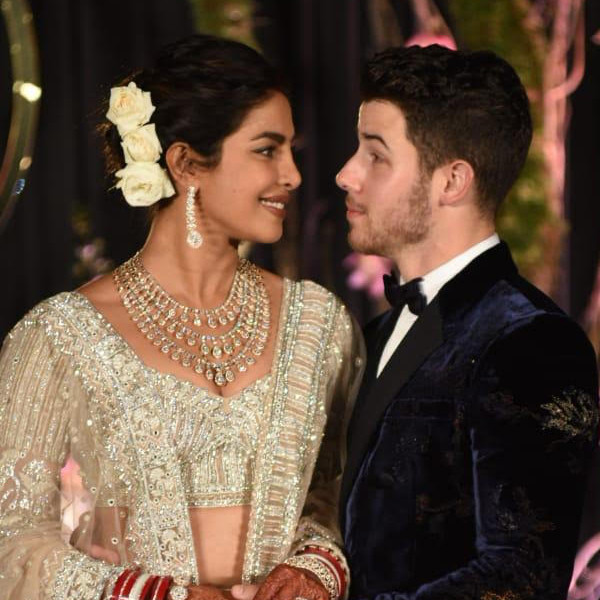 If one were to write the love story of Nick Jonas and Priyanka Chopra, it would go a little something like this: First came love (after several years of friendship and one slightly embarrassing display of affection at an Oscars party), then came marriage. And then, just to really solidify things, a bunch of extra weddings thrown in for good measure.

There was the initial three-day celebration, featuring a Hindu ceremony, a Mehendi and a Sangeet—which is pretty par for the course with any Indian wedding—plus a Christian vow exchange to recognize Jonas’ faith. And then they had another reception in New Delhi, plus a couple in Mumbai so Chopra could include her coterie of Bollywood friends and her parents’ pals.

Once back stateside, they held one for Jonas’ family. And then, as these things tend to do when you’re trying to please everyone even tangentially involved, it got to the point where they couple could do nothing but poke fun at their own revelry, with Jonas captioning a photo of them at a February charity gala, “Walking into wedding reception 100047 like… Haha just kidding.”

Sure, it was a lot. And if one of our friends was asking us to fly somewhere and toast to them for the umpteenth time, we’d for sure be complaining behind their backs. But judging by the disparate guest lists, the round-the-world ceremonies were meant to cater to friend bases in different regions, so it was actually pretty thoughtful.

And sometimes when you find that person you’re meant to do life with, it’s hard to stop celebrating, okay?

By all accounts, the pair are still going, albeit without the bridesmaids and the grandiose floral arrangements. “Every single day when I wake up I’m like, ‘Oh, I have a home. Like this is my home. This person is my home,'” Chopra, 37, shared with E! News of their union, ahead of this, their first anniversary. “And I didn’t know that feeling outside of my parents. Like, it’s like, ‘Oh, this is the family that I have chose.’ It’s family.”

And the pair have had many occasions to enjoy since then—everything from her birthday in Miami to his recent 27th on Chicago’s Solider Field to an Italian getaway just because—and more excitement ahead what with Chopra’s assertion to Vogue India that “buying a home and having a baby are on my to-do list.”

But it’s fun to look back at what would have been the wedding of the year, you know, if not for Chopra’s good buddy Meghan Markle.

It’s pretty tough to top a wedding at a literal castle, where we’d be hard-pressed to name the most famous guest because the list of attendees includes everyone from Oprah Winfrey to George Clooney to England’s reigning monarch and the next, well, all of them basically in the line of succession. (Save for then-one-month-old Prince Louis, who was tucked away far from the festivities.)

But boy did Jonas and Chopra swing for the fences.

With some 225 guests, including older brothers Kevin Jonas (and wife Danielle Jonas) and Joe Jonas (with then-fiancée Sophie Turner), gathered in Jodhpur India, the duo took over the Umaid Bhawan Palace, at 347 rooms, one of the world’s largest private residences, for four days. First there was the Nov. 30 Mehendi, where both bride and groom were adorned in henna, and the Sangeet, the traditional choreographed and costumed song and dance night made all the more fabulous by the plethora of professional musicians in attendance.

“What a performance it was,” Chopra wrote on Instagram. “Each family telling our stories through song and dance, filled with lots of laughter and love. We were both filled with gratitude for the effort, the love and the laughter and will carry the memories of this special evening for the rest of our lives. It is an amazing start to a lifetime of togetherness for our families and friends.”

That Saturday, Dec. 1, saw the couple officially joined by his ordained minister father, Kevin Jonas Sr., in a Western ceremony held on the palace’s expansive lawn, the set-up dripping in flowers. Chopra herself carried a bouquet of tuberoses, but nothing could distract from her resplendent 75-foot veil and hand-beaded, embroidered Ralph Lauren gown—just the fourth bridal look the designer has ever created, it was a nod toward the 2017 Met Gala that initially brought the Ralph Lauren-clad pair together.

“It was all tears. All tears,” she told People of the moment. “I could not hold it in. I think I was nervous and scared. But as soon as the curtains opened, and I saw his face it was just like everything settled and I knew I was making the best decision of my life.”

Same for Jonas. “You know you think your whole life about that moment,” he told the mag. “Honestly, I could not have imagined it would be as perfect as it was. It was highly emotional.”

The following day didn’t disappoint either, as the couple did a ceremony redux, the extraordinary displays of flowers now laced with pops of red to coordinate with the bride’s traditional lehenga, and the end-of-the-night fireworks display just as impressive. Closing out the festivities: a Bidaai, a bridal ritual that saw the actress’ family blessing her future with Jonas.

“I love that our wedding was a religious mash-up,” she told People. “We took beautiful traditions that we both grew up with and personalized them in a way that made sense for us. It’s been incredible to find the commonalities between our beliefs and figuring out how to blend them in a respectful and meaningful way.”

The whole weekend, planned by Sandeep Khosla and Aditya Motwane, of Abu Jani Sandeep Khosla and Motwane Entertainment & Weddings, was precisely the princess event Chopra had imagined and every bit as exhausting as she predicted. Joking ahead of time to Vogue, she said, “People will need vacations after this wedding!”

Still, as fantastical as it all was, it was far from too much, she reasoned during a January appearance on The Ellen DeGeneres Show.

“It was just three days!” she protested when the host poked fun at their extravagance. “One Indian ceremony and one western Christian ceremony, and one day of pre-rituals—which we have in the Hindu wedding. But it was not, like…usually Indian weddings are a thousand people, at least. We only had 200, which was mostly family because both of us have giant families.”

So, actually, she reasoned, it was quite small, particularly when you consider the former Miss World is one of the country’s biggest stars. ”My mother was so upset with me the whole time. She was like, ‘I need to have another wedding for the other 150,000 people that I know! How can I not invite my jeweler? How can I not invite my hairdresser?’ So it was a whole conversation.”

One that, no doubt, ended with the compromise that unfolded. Rather than having one party for 1,000, they’d have five or so, playing host to several hundred each time.

Just two days after their Hindu ceremony, the couple traveled to Delhi for another grandiose reception at the Taj Palace Hotel. ”Their moods were very jubilant,” a source told E! News of the time of the bride, in a Falguni Shane Peacock lehenga, and her groom, in a navy tux. “She was happy and addressing everyone in the party. She and Jonas looks like they are on top of the world.”

They rode that wave to a Dec. 19 party in Mumbai, where they shared their joy with her parents’ friends. ”This has been an extremely special chapter in my life and I wanted my husband to meet all of the special people that have contributed to it,” she explained of the never-ending celebration, thanking her mom, Dr. Madhu Chopra for hosting and her late father “who I know is here.”

And she couldn’t resist spreading a little of that joy online, writing on Instagram, “And the party don’t stop..”

It didn’t, with another party the next night, reportedly for her Bollywood friends. Eventually their nuptials turned into a game of sorts—where in the world are Nick and Pri celebrating their marriage?—and stretched on for so long that they had to take breaks in between, attending another wedding in Mumbai, celebrating the holidays with Turner’s family in England, ringing in the new year in Switzerland and even going on a Caribbean honeymoon before finally making their way back to the states to fete their union with his side of the family.

At Nellie’s Southern Kitchen in Belmont, North (named for Jonas’ late great-grandmother), Mama and Papa Jonas invited guests “to come celebrate their boy and his bride.” As a sign set up inside the Jan. 27 event, “Nick and Priyanka just got hitched but that knot that they tied has not been dipped in gravy or honey or hot chicken grease,” so they appropriately dug into some home cookin’ and cake, introduced to the strains of Joe Cocker‘s “You Are So Beautiful”.

By this point, the constant clinking of glasses and first dances had become too much for even the groom. When asked by James Corden during a “Carpool Karaoke” session with his brothers if there was a moment “that you thought, ‘I’m done with these weddings?'” he responded, “Yes. It was when I looked at the bill.”

Still, he and Chopra have no regrets about how they marked the legal entwining of their lives, even if that means they have to suffer the occasional ribbing both from strangers and those close to home. With his wedding to Turner on the horizon, Corden asked Joe what tidbits he’d picked up from seeing his siblings get hitched.

“Mostly things not to do,” the middle Jo Bro joked. “They were both absolutely beautiful. All 18 of Nick’s [were] amazing.” With Kevin, he continued, his winter vows occurred during a snowstorm, “So maybe don’t get married in December. And for Nick, there were quite a few, but I would say stick to one. One and done.”

Well, two, actually, he and Turner getting legally hitched in Las Vegas after the Billboard Music Awards before their French affair this summer.

Remarking on the whirlwind that was getting engaged in July to locking in a venue in October, Chopra told Elle UK, “We had one-and-a-half months to plan, so we were just like, ‘Yeah, yeah, yeah, let’s get it,'” which makes the over-the-top nature even more impressive, TBH. “It was very extravagant,” she continued. “Hopefully you just do it once. So it’s fine.”

With just a few extra celebrations for good luck.