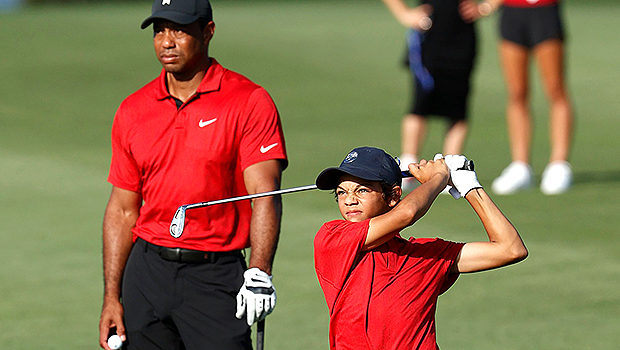 Like father, like son! Tiger Woods revealed on Friday, Dec. 16 that although both he and his son, 13-year-old Charlie Woods, have foot and ankle injuries, their main focus is to get out on the golf course together and have a blast at the PNC Championship in Orlando, Fla. over the weekend. “You know, I don’t really care about that,” Tiger, 46, said of the chance that he’s delaying his recovery by playing in the tournament. “I think being there with and alongside my son is far more important, and [getting] to have a chance to have this experience with him is far better than my foot being a little creaky.”

Both Tiger and Charlie were on the golf course earlier in the day at the Ritz-Carlton Golf Club and were both noticeably limping. As fans know, Tiger is still recovering from the scary car accident he got into in early 2021, from which he suffered severe fractures in his lower right leg and ankle that required surgery. He is currently dealing with swelling in his right foot, or plantar fasciitis, which, according to the Mayo Clinic, is “one of the most common causes of heel pain.” His pain was so severe last month that he pulled out of the Hero World Challenge, an event his foundation hosts. The event took place in Albany, Bahamas between Nov. 28 and Dec. 4.

Meanwhile, Charlie, who made his national TV debut alongside his father at the 2020 PNC Championship, is suffering from a sprained ankle.

“Any time I get a chance to spend time with my son, it’s always special,” Tiger continued during his chat with the press. “And to do it in a competitive forum, the last couple of years have been magical, and to be able to do it again, we’re looking forward to it.”

Speaking more deeply about his ongoing recovery, Tiger said that “it’s been a lot harder than people probably imagine.” He continued, “There’s some of the players who are very close to me know what I’ve kind of gone through, and they’re the ones that keep encouraging me to back off a little bit.”

Despite his friends’ encouragement to slow down, Tiger said that won’t be happening. “But that’s not really in my nature. My nature is trying to get better, and I have,” he explained. “And through work ethic, I was able to play and compete in three major championships this year.” Tiger competed at the Masters Tournament in April and the 150th Open in July. He withdrew from the PGA Championship after three rounds in May.

Lindsey Vonn’s Boyfriend: All About Diego Osorio & Her Exes, Including Tiger Woods

Luckily, Tiger is allowed to use a golf cart at the PNC Championship — something that could have potentially been a make-or-break deal for him. “Yeah, I can hit golf balls,” Tiger said at the Hero World Challenge, looking ahead at the PNC Chamionship, per Golf.com. “It’s the walking that just hurts. So that’s just a — something that — when you’ve got plantar fasciitis, the only thing you can do is rest and try and stretch that out as best as possible, but it’s rest.”

“So this will be a tough week. The Father-Son will be a very easy week,” he said with positivity. “Charlie will just hit all the shots and I’ll just get the putts out of the hole, so pretty easy there. But other than that, in the match we’re playing in, we’re flying in carts.”