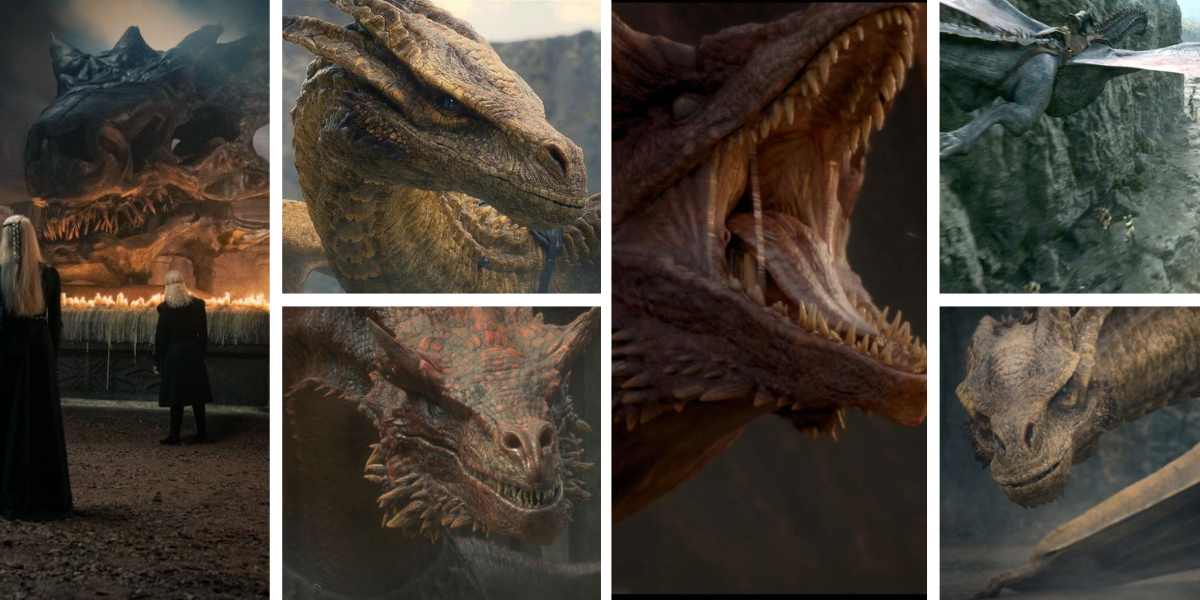 In any given shot over the course of Game of Thrones’ eight seasons, it’s relatively easy to decipher which of Queen Daenerys’ dragon babies—Drogon, Rhaegal, and Viserion—is which. But toss a dozen additional dragons into the mix, and recognizing one fire-breathing beast from another becomes a little more strenuous. Besides, what if you don’t even recall the most famous dragons of all? Keeping tabs on these majestic scaled creatures might be a challenge for audiences of HBO’s new Thrones spin-off House of the Dragon—especially if they aren’t devoted readers of George R. R. Martin’s books.

Already, multiple different dragons have popped up in the new prequel series’ first nine episodes, though you’d be forgiven if you’d only counted a few. And there could be as many as 17 onscreen by the time House of the Dragon wraps up its final season, as co-creator Ryan Condal teased during the 2022 San Diego Comic-Con.

So, to keep this influx of dangerous flying pets straight, we’re tracking each of the new dragons as they appear in House of the Dragon—and sprinkling in some important text-and-TV-based context. We’ll avoid any non-show spoilers, but no guarantees you won’t come away from this article without a favorite winged serpent. (Mine’s currently Meleys, but check in next week for updates.) Below, all the HotD dragons so far.

The first fearsome creature to appear in House of the Dragon arrives in the memorable opening shot of episode 1: a yellow beast swooping through the sky with a Targaryen royal on its back.

This is Syrax. We learn in Martin’s Fire & Blood, from which House of the Dragon is adapted, that Princess Rhaenyra (Milly Alcock, later Emma D’Arcy) became a dragonrider at the age of seven, bonding closely with the golden Syrax, so named “after a goddess of old Valyria.” Described as a “huge and formidable beast”—though not the biggest of the Targaryen dragons—Syrax was supposedly fast enough to race Daemon Targaryen’s dragon, Caraxes, to Dragonstone and back. We see this dynamic play out in episode 2, when Rhaenyra uses Syrax to confront her uncle and his dragon on the bridge at Dragonstone, shortly after Daemon swipes an egg from King’s Landing.

We also know Syrax lays a clutch of eggs during the course of season 1, as Daemon is depicted scooping them up in episode 8.

Also in episode 1, we meet Caraxes, mount of Daemon Targaryen (Matt Smith) and a “lean red beast,” as described in Fire & Blood. “Fiercest of all the young dragons in the Dragonpit,” Caraxes was once the mount of Prince Aemon Targaryen, son of Jaeherys and uncle to both Daemon and Viserys I (Paddy Considine), but he became Daemon’s mount by the year 105 AC. Nicknamed the Blood Wyrm for both his color and his brutal tendencies—he is “savage and cunning and battle-tested”—Caraxes has a noticeable appetite. (In one scene from Fire & Blood, he devours half a dozen goats in one sitting.)

He also is a bit of a “bullying white boy,” or so The Ringer writer and podcaster Joanna Robinson explained in a recent episode of the podcast Talk the Thrones. Robinson says she exchanged messages with House of the Dragon sound designer Paula Fairfield, who told her that Caraxes roars with such a strange, strangled whine because “he’s the dragon that no one loves, and he has a deviated septum…He’s a bullying white boy who thinks he can rap and overcompensates, so like real Kendall Roy energy.” Respect.

Technically, we never actually meet the biggest and oldest of the Targaryen dragons during the time of House of the Dragon. But we do see his skull, nestled in the crypt where Viserys informs his daughter and heir, Rhaenyra, of the secret known as A Song of Ice & Fire. The dragon skull looms over them, dark and enormous, fitting given that Balerion the Black Dread was described as “huge and ancient and sleepy” in Fire and Blood.

Once the mount of Aegon the Conqueror, Balerion was integral to Aegon’s Conquest of the Seven Kingdoms. Black and mighty, with a wingspan that could engulf entire cities in shadow beneath him, Balerion was one of the last dragons born in Valyria and a survivor of the Doom, an unspecified catastrophe—possibly a natural disaster—that destroyed the Valyrian Freehold. Many years later, he became the mount of Viserys I, but by this point he was old and weakened. After Balerion’s death of old age in 94 AC, Viserys never again rode another dragon.

The stunning “pale grey beast that had been the pride and passion of Ser Laenor Velaryon,” or so he is described in Fire & Blood, makes such a sudden appearance in episode 3 of House of the Dragon that it’s easy to confuse him with another of his counterparts. He bursts into the War for the Stepstones with Ser Laenor on his back; though Laenor is not a Targaryen in name, his mother is Rhaenys Targaryen, and so he has dragon-riding blood. We only get a few minutes of Seasmoke visuals during episode 3, and by the end of episode 7 Laenor has escaped across the Narrow Sea with his lover, Ser Qarl, leaving Seasmoke’s fate as-yet undetermined.

This next dragon is one we’ve yet to see up close. But her existence in House of the Dragon was confirmed during episode 2, when Daemon admits to stealing one of her eggs for his unborn (and, we later learn, completely fabricated) child. So if one of Dreamfyre’s eggs exists, that must mean Dreamfyre herself exists, likely in the Dragonpit with Syrax, Caraxes, and the others.

Once the mount of Princess Rhaena Targaryen—not to be confused with Rhaenys or Rhaenyra!—Dreamfyre is of silver and blue coloring, and lays several eggs over the course of her life. (Some even theorize that Daenerys’ dragons could be Dreamfyre’s long-lost offspring.) She is now the mount of Princess Helaena Targaryen, daughter of Viserys and Alicent Hightower, and herself an apparent dragon-dreamer.

Perhaps the most visually impressive dragon on the show is Vhagar, the sister of Balerion the Black Dread and the only still-living dragon to have arrived in Westeros with Aegon the Conqueror. By the end of Fire & Blood, this dragon “had grown nigh as large as the Black Dread of old. Her fires burned hot enough to melt stone.”

Vhagar is first discussed briefly by Viserys and Laena Velaryon (Nova Fouellis-Mosé) in episode 2, during the two’s awkward walkabout in the gardens. Laena reveals that Vhagar is still alive, somewhere, though the dragon’s apparently too big for the Dragonpit, to which Viserys responds, “Some would say too large for our world.”

In episode 6, after a 10-year time jump, it’s revealed that Laena eventually claimed Vhagar as her mount, and the two are depicted flying alongside Daemon and Caraxes. But the joy is short-lived, as Laena’s traumatic childbirth later results in Vhagar assisting her in suicide.

In episode 7, we meet the enormous she-dragon again, snoozing on Driftmark shortly after Laena’s funeral. Viserys and Alicent Hightower’s insolent second son, Aemond, decides to try and claim the dragon as his own mount, and though he’s successful, stealing her away from Laena’s daughters prompts a violent squabble between families. They don’t call it the Dance of the Dragons for nothing! Later, in episode 9, an older Aemond references that he rides the largest dragon in the world—meaning he’s officially bonded with Vhagar. He’s seen riding her in the season 1 finale as well.

Princess Rhaenys’s dragon, Meleys, made only a brief appearance in the early episodes of House of the Dragon, but she’s proven increasingly essential as the series progresses. According to Fire & Blood, Rhaenys arrived to her wedding to Corlys Velaryon on Meleys’s back, which, in hindsight, is how I should have showed up to mine.

The scarlet-scaled dragon—known as the “Red Queen”—was once the mount of Princess Alyssa Targaryen, mother of Viserys. In episode 9, “The Green Council,” Meleys makes a dramatic on-screen appearance during the coronation of the usurper King Aegon II, bursting through the floors of the Dragonpit and carrying Princess Rhaenys in battle armor upon her back. She’s mere moments away from toasting the Hightower clan to a crisp when Rhaenys pulls her away without uttering “Dracarys.” Together, they fly to Dragonstone to warn Rhaenyra of the plot to foil her claim to the throne.

In episode 10, Rhaenys pledges to patrol the Velaryon fleet’s blockade of The Gullet with Meleys. Perhaps that’s where we’ll find them at the start of season 2.

Vermax first appears as an adolescent dragon in episode 6, when a young Jace Velaryon (Rhaenyra’s eldest son) attempts to teach him to “Dracarys.” He seems about ready to eat this master first, but ultimately acquiesces. By episode 10, it seems the beast and rider have fully bonded as Jace flies on Vermax to the Eyrie and Winterfell to confirm the support of his mother’s allies.

We’ve yet to officially meet Sunfyre, but King Aegon II, eldest son of Viserys and Alicent, mentions in episode 7 that the golden beast—“the most beautiful dragon ever seen in the known world,” according to Fire & Blood—is his mount.

Jace’s younger brother, Luke, has his own dragon: the “pearlescent white” Arrax, whom he rides to Storm’s End in the House of the Dragon season 1 finale. But by the end of the episode—spoiler alert!—Arrax is killed by Vhagar, and so is his rider Lucerys.

This slender, green dragon—per Fire & Blood—is the mount of Lady Baela Targaryen, Laena Velaryon and Daemon Targaryen’s oldest daughter. This young beast has yet to make an appearance on House of the Dragon.

This is the mount of Joffrey Velaryon, Rhaenyra and Laenor’s third son. He’s yet to appear in the television series, but Daemon mentions him in passing while listing all the dragons the blacks have at their disposal. According to Fire & Blood, Tyraxes is slightly smaller than Vermax and Arrax.

This older beast was once the mount of King Jaeherys I Targaryen, who preceded King Viserys on the Iron Throne. In Martin’s books, Vermithor is described as bronze in color with tan wings and is almost 100 years old by the time the Dance of Dragons begins. The only dragons larger than him were Balerion and Vhagar, which means he is enormous in size.

Daemon name-drops Vermithor in episode 10 as another potential dragon on Rhaenyra’s side of the war. He is riderless and currently dwells on the Dragonmount in Dragonstone, and but Daemon goes looking for him in the season 1 finale while singing a High Valyrian tune. Maybe this means we’ll see more of Vermithor in season 2.

Often paired with Vermithor, Silverwing is another unclaimed dragon at the Dragonmount who has not yet appeared on House of the Dragon. She’s described as silver-hued—hence her name—and docile in Fire & Blood. Silverwing was previously the mount of Alysanne Targaryen, the sister of King Jaehaerys I, but in the TV series, she does not currently have a rider.

In episode 10, Daemon also mentions that there are three wild dragons nesting in Dragonstone, which the blacks can use to their advantage. Time will tell if these beasts will eventually become claimed, trained, and flown in war.

Lauren Puckett-Pope is an associate editor at ELLE, where she covers film, TV, books and fashion.