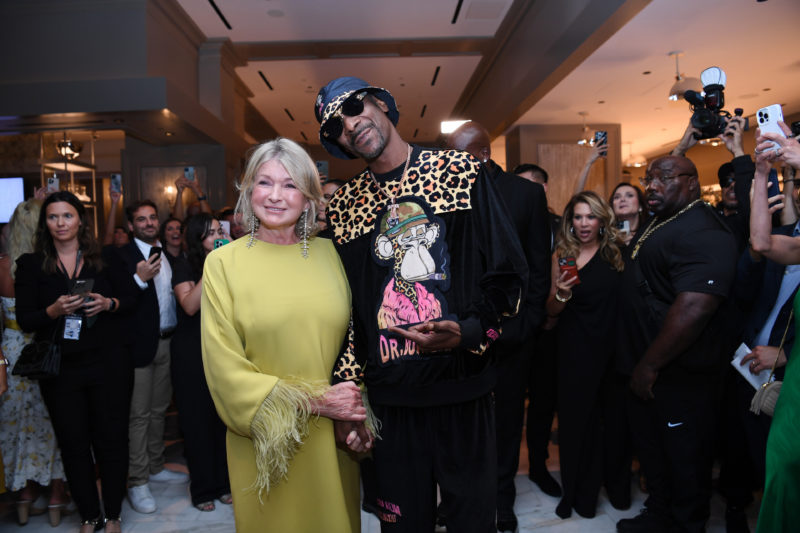 Here are five reasons why.

From her coastal grandmother aesthetic (which she rebukes for the record), to her genuinely close friendship with Snoop Dogg, the model-turned-stockbroker-turned-caterer-turned-DIY-icon continues to delight and surprise us.

Here are just a few of the reasons why Stewart is having the last laugh.

Her social media posts are an exercise in self-love

Ever since the famously reserved Stewart stunned fans by posting her first smouldering thirst-trap from her East Hamptons pool last July, she’s been leaning into the pure joy that is her selfie game. Just a few weeks ago, for her 81st birthday, she shared a shot of her gravity-defying face—revealing a little bit of tipsiness and a whole lot of confidence.

In true DIY fashion, Stewart also generously shares her hot tips: “Just look good and pose with a provocative look on your face,” she tells Insider. Her smize would make Tyra Banks proud.

Stewart is a savvy businesswoman. She modeled—for Chanel among others—from her teens to her early twenties to supplement her Barnard College scholarship. She’s published 97 cookbooks to date. At one time, she was worth a billion dollars. She’s never needed her own restaurant, but she’s always wanted one, so why not now? At the media luncheon for her first ever full-service eatery, The Bedford by Martha Stewart at Paris Las Vegas,  the doyenne of domesticity recreated a larger-than-life replica of her upstate New York farmhouse. (Unfortunately, sans roaming peacocks and donkey baths.) It’s an ode to the home Stewart has lived in for more than 20 years, where she spent the early part of the pandemic concocting Martha-ritas, and where, 17 years ago, she served the five-month home confinement part of her sentence for insider trading. (Her prison nickname was M. Diddy.) If she’s taught us anything, it’s that it’s never too late to rebrand.

She’s having more fun with fashion

The dame of good taste has always had iconic style, but in her golden years, she’s taking on more risks—and glitter. At The Bedford opening party, Stewart wowed on the red carpet in a yellow, feathered Valentino gown. She knows high fashion, but she can also go low. The next morning, her Instagram outfit of the day was a sparkly and inexpensive sweatsuit by Fashion Nova paired with matchy Simon Miller clogs. The OG influencer cleverly used this playful fashion moment on TikTok too, with a montage of her younger years to the track of the 2000s hit single “Teenage Dirtbag.”

Her youthfulness is also a state of mind

Stewart is a knockout who clearly takes her looks seriously (her very expensive face looks a few decades younger than it really should), but she has no trouble poking fun at herself, which makes her even more appealing. In a series of chic-yet-hammy TikTok beauty videos she starred in for Clé de Peau earlier this year, she plays along with her famous “it’s a good thing” meme and  “parodies not only herself but the whole idea of hard-sell beauty ads,” writes the New York Times. From her “thirst trap 101” explainer to her viral “recipe for hydrated skin,” Martha Stewart is pumping out the beauty content, and we can’t get enough. The latter has been viewed more than 48 million times.

She hasn’t given up on love (and odd friendships)

It might still surprise people that the octogenarian queen of crafting is friends with Snoop (not to mention Drake and Justin Bieber), but the pair have been consistently showing up to support each other for years. They hit it off when he came on her show to make “green”  brownies for Christmas and they’ve since collaborated on many fun business projects together, including her eponymously named wine on his 19 Crimes label: Martha’s Chard.

And even though Stewart laughed off rumours she was dating her longtime friend, Pete Davidson, 28,  after he and Kim Kardashian split up,  she’s been open about wanting a romance in her life, joking that she’s waiting for her friends to “just die” so she can date their husbands.

For Martha Stewart, aging can also be “a good thing” and it’s never too late to try something new.