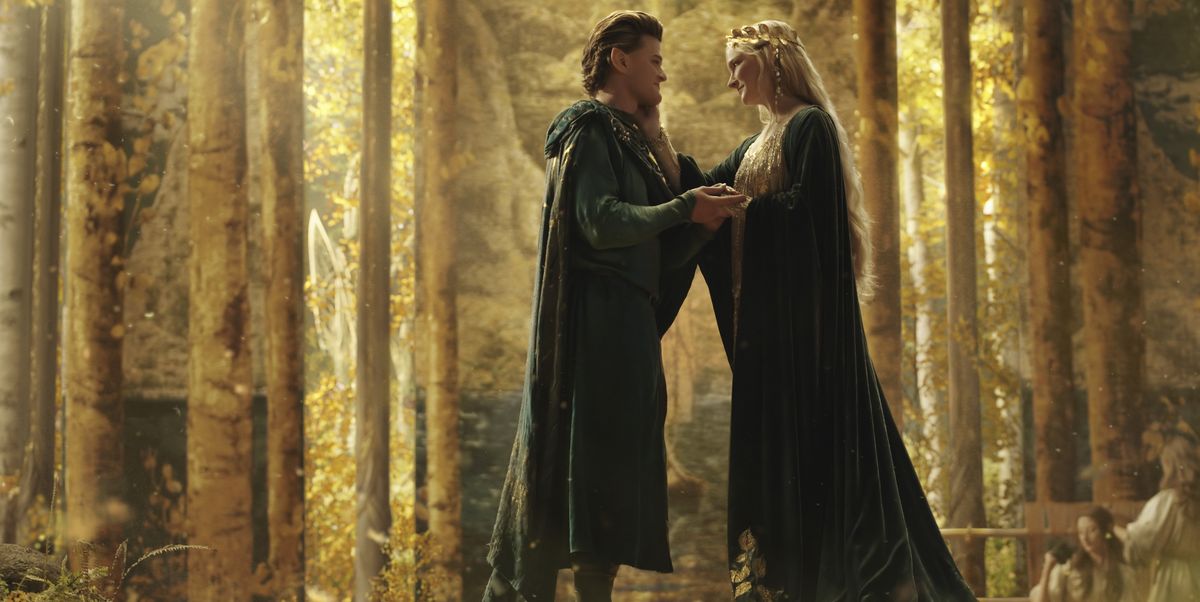 The saga begins, perhaps intelligently, with a flash of the familiar. A girl with hair that can only be described as golden sits alongside a brook, so picturesque in its countryside aesthetic that it feels more dream sequence than memory. We do not know this girl, this Galadriel, but of course we know Galadriel—and this girl is immediately, unquestionably Galadriel, the eventual Elven royal played by Cate Blanchett in Peter Jackson’s revered Lord of the Rings films. As her brother teaches the young Elf a lesson in hope and perseverance, Amazon’s monumental fantasy series The Rings of Power makes its intent clear from the start: The series will use every possible resource, both monetary and narrative, to evoke the author J.R.R. Tolkien’s hand presiding over its production. But emulation can only accomplish so much.

What made Jackson’s films so singular was Jackson’s ability to summon Tolkien’s sensibilities without attempting to become him. His movies felt both reverential and separate, singular, enjoyed apart from the books. (Plenty of fans, including the man who played Frodo Baggins, will admit never even reading the original series.) Perhaps a religious analogy best explains the complicated nature of this endeavor: LotR fans desire communion, a unique encounter with the object of their devotion, but not for any interpreter to act as God himself. That would be blasphemy. Toeing the line between worship and invention is where The Rings of Power will either falter or fly. And—to top it all off—the show will need to placate viewers who might have no familiarity with Middle-Earth whatsoever.

And so this opening sequence is essential, in which an older Galadriel (Morfydd Clark) narrates the dawn of the Second Age, a period many years before the events of The Hobbit and The Lord of the Rings. She describes the rise of Morgoth, the first Dark Lord and predecessor to LotR’s primary antagonist, Sauron. After he destroys the trees Laurelin and Telperion in the Elven home of Valinor, a.k.a The Undying Lands, the Elves—including Galadriel’s brother—sail to Middle-Earth and battle Morgoth’s orc forces in a war that killed thousands and lasted centuries. After Morgoth’s defeat, the sorcerer Sauron rose up in his place, and after her brother fell by Sauron’s hand, Galadriel vowed to (literally) take up his sword. But after leading her battalion in a wild goose chance around Middle-Earth, her followers have grown tired.

In the icy lands of Forodwaith, she and her company explore a deserted orc citadel, where they discover Sauron’s mysterious sigil carved in ice. “He was here,” Galadriel says, and demands her group rest before they hunt the sorcerer father north, where it’s sure to be even colder. Her guard protests; the company exceeded their orders months ago. But she insists, no matter how deeply she yearns to go home, that she cannot abandon her quest until “every trace of our enemy is vanquished.” Unfortunately, Galadriel has to cut off her inspiring speech to slay a snow troll, which proves the last straw for her companions. They lay down their weapons; if she wishes to pursue Sauron further, she must go it alone.

Galadriel is stubborn, but she’s no fool. She won’t survive amongst the blizzard conditions on her own, nor can she face Sauron with nothing but her brother’s dagger. And so she temporarily quits her mission to travel to Lindon, the capital of the High Elves, where she meets an old friend: Elrond (Robert Aramayo), whom many will recognize as the eventual Rivendell Elf-ruler and father of Arwen. But here, he is young, many years from the birth of his daughter and the Third Age’s Fellowship of the Ring. To Galadriel, he reveals that the High King Gil-galad (Benjamin Walker) is not altogether pleased with her insistence upon chasing Sauron, risking not only her own life and limb but those of the armies. She has repeatedly disobeyed any restrictions placed in her path, which makes the king’s commendation of her victories a mercy rather than a true congratulation.

At the ceremony, Galadriel struggles to smother her instincts. When the king bends to place a gold wreath upon her head, she resists bowing for him, their gazes waging a silent scuffle for dominance. When, finally, he announces that she and her fellow warriors will be rewarded for their bravery with a trip to Valinor, to the Undying Lands, even Galadriel cannot hide her emotion. Valinor is her home; she has longed for it for centuries. Perhaps only Elrond understands the position this puts her in: Fulfill her heart’s deepest desire, or carry out the mission she promised her brother’s corpse she’d finish?

Elsewhere, in Tirharad of the Southlands, the Elf-human relationship is balancing on a razor’s edge. We’re introduced to Arondir (Ismael Cruz Cordova), a Silvan Elf out of Mirkwood, assigned to scout the Southlands and, in essence, keep watch on the humans, many whose ancestors fought on behalf of Morgoth years ago. The humans feel stifled and unfairly oppressed on behalf of old grudges; for the Elves, who live far longer than humans, the past does not feel so distant. “One day, our true king will return, and pry us right out from under your pointy boots,” one pub patron spits in Arondir’s face. But his insolence doesn’t offend the Elf, who’s been getting pretty close with some of these underlings—in particular the human woman Bronwyn (Nazanin Boniadi), with whom he’s developed an Arwen-Aragorn-like flirtation. (Although it’s hard to call it flirtation; for most of episode 1, they exchange little more than uncomfortably long looks.) Arondir’s fellow Elven scout is convinced this match will end in death, like the pitiful few Elf-and-men pairings before it, but Arondir has no chance to defend his affections before news from the High King arrives: Now that Galadriel and her company are sailing to the Undying Lands, the war is considered over. The outposts will be disbanded, meaning the Elves will leave the Southlands and return home.

Arondir’s watch warden insists the patrolman be grateful he need never see humans again, as “the blood of those who stood with Morgoth still darkens their veins.” But Arondir doesn’t believe humans are so inherently evil; if that were the case, why is he so drawn to Bronwyn? Sure, it could be because her son is probably, maybe, definitely hiding an evil sword in the barn floorboards, but she seems nice, too!

As they scout out the nearby town where Bronwyn was raised—and where mysterious dark forces are afoot—Arondir gently confronts Bronwyn about her people’s association with Morgoth. She’s offended by mere association with the villain’s name. Her people are good people. Arondir agrees, but then again, he doesn’t yet know about that sword.

Meanwhile, miles away, in the land of Rhovanion, the nomadic Harfoots—ancestors of Hobbits, with the hairy feet to match them—emerge from their hiding places in a delightful scene of cottagecore whimsy. Their faces are flushed and smudged with dirt, their hair tufted and uncombed, their baskets and wheelbarrows and bowls stuffed with root vegetables and berries and snails, the lush vegetation of their surroundings weaved—quite literally—into their clothing and furniture. Here, we first meet Nori (Markella Kavenagh), our Bilbo/Frodo stand-in, the only one amongst her kin who seems keen on—as any Baggins would endorse it—a good adventure. Her laughter punctuates the glorious score by Bear McCreary, sure to become a favorite of study groups everywhere.

Her fellow Harfoots chide her insatiable curiosity, but the Harfoot elder Sadoc Burrows (Lenny Henry) finally lets slip a juicy bit of neighborhood gossip: The skies and their stars look strange these days. And those travelers who passed by with giant antlers on their backs? An unusual sight this time of year. Something’s off. Something’s about to happen.

And something remarkable indeed happens, as a meteor bolts across the sky, visible from all corners of Middle-Earth. When it lands with an explosive blast in Rhovanion, it brings with it The Stranger (Daniel Weyman), a man left asleep and encircled in a quaking wheel of fire within the rock’s crater. Whether human or giant or wizard, we don’t yet know—only that his grand entrance is a blatant rip-off of Stardust. Neil Gaiman, cut a check.

But back to the girl with golden hair. In the realm of Elves, Galadriel finally sails for the Undying Lands, while Elrond frets over whether he convinced her to make the right choice. Gil-galad brushes off his concerns, convinced that, should she have continued her search for Sauron, Galadriel would only have perpetuated the evil she sought to eradicate. Instead, he assigns Elrond a task: Work for Celebrimbor, the esteemed Elven smith who’s “about to embark on a new project, one of singular importance.” Gil-galad doesn’t reveal what this important project is, but we can take an educated guess based on the show’s title. (Book readers, I know you know. Let’s not spoil it for everyone else.)

Still, Galadriel won’t let Gil-galad and the rest have it so easy. As Valinor opens up before her, its eternal light bathing her company in radiance, she turns to stare at her brother’s dagger resting on the ship deck. In LotR lore, Valinor is a form of heaven, a place of perpetual peace and beauty, where the gods invited Elves to rest millennia ago. But those Elves who chose to remain too long in Middle-Earth—and those who left Valinor to battle within Middle-Earth—risked becoming “Lingerers,” fading until the afterlife catches up with them. This is important to understand, in order to grasp what Galadriel is giving up here: It is nothing less than the possible dissolution of her soul, and an eternal severance from her home.

But she would not be the leader so respected in the film franchise’s Lothlorien if she were to abandon a fight before it is won. As Valinor welcomes her company with the heart-stirring harmonies of a sacred choir, Galadriel dives off the edge of the boat, where she is alone to navigate the troubled waters ahead. (And to, presumably, swim across an entire ocean?)

The Rings of Power’s first episode, like its much-discussed budget, is big. It is pretty to look at. It’s a bit slow, and not all the characters feel as intimately wrought as Galadriel. Not all the dialogue is written well, nor is it delivered elegantly. But the episode is immersive in a way that few other fantasy series have accomplished, including the new Game of Thrones prequel House of the Dragon. House of the Dragon has yet one advantage: Its source-material mastermind is nestled neatly into a co-creator’s chair. Tolkien is not so within arm’s reach for The Rings of Power.

But even having Martin so close might not be enough to restore Thrones to its full glory. And sometimes a student must take up the mantle of the teacher. With the right group of stewards handling its precious artifacts, The Rings of Power just might do as it dreams.

Lauren Puckett-Pope is an associate editor at ELLE, where she covers news and culture.

Wednesday September 21st on the #jimmystarshowwith

Super stoked that the #jimmystarshowwithronrussell

We had an amazing afternoon at @suewongfashion Mal

Tomorrow on the #jimmystarshowwithronrussell #good