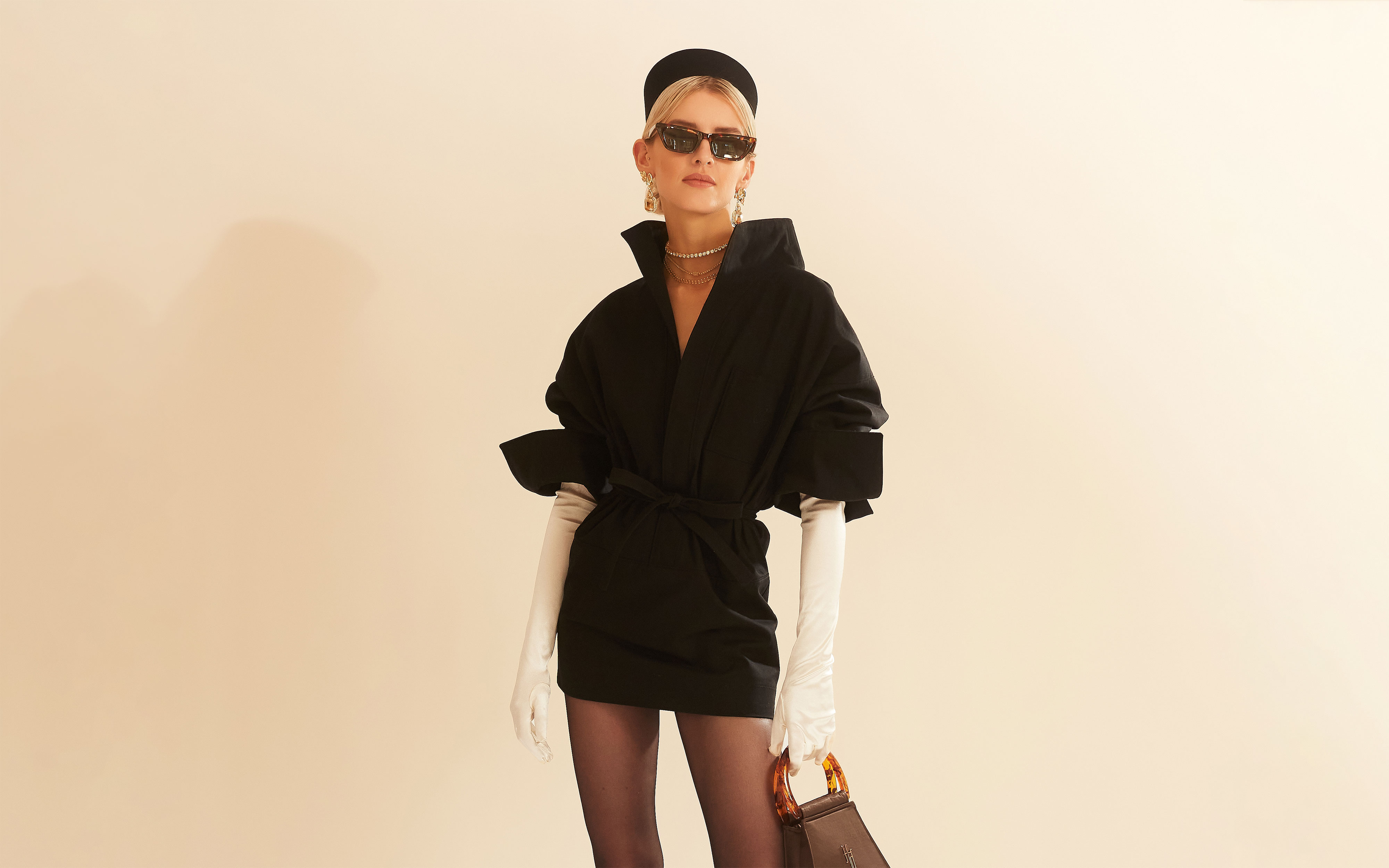 Thanks to Matthew Gallagher, our holiday wish list just got bigger!

For Matthew Gallagher, the pandemic has been a time of reflection — and rethinking the shirt dress. After falling in love with a Parisian and moving outside of Toronto, the Nova Scotia-born designer found himself re-evaluating his namesake brand. “I felt like my voice had altered from when I first started in fashion,” he shares via email. “I was starting to fall out of love with the work and was feeling a bit lost. That was my cue to take a step back and figure things out.”

Before 2022, Gallagher was known predominantly as an eveningwear designer. He launched his label in 2013 after studying at the prestigious Istituto Marangoni and Istituto Europeo di Design in Milan and Gallagher quickly became a fixture at Toronto fashion shows and events.

But nearly ten years after founding the House of Gallagher, he knew something had to change. “I had always planned on relaunching; I just didn’t know how I wanted to do it,” he reveals. “I wanted my brand to be more approachable and for my pieces to be worn on more than just fancy occasions.”

Enter Season One, his new collection that features streamlined silhouettes combined with an effortless edge and feminine accents. Blending the past with the present, the assortment of dresses and separates has notable mod touches (made more evident by the Jackie O-inspired styling) but stays current with cutouts and bold colours (hello, Barbiecore shirt dress!).

FASHION chatted with Gallagher about his time in the industry, why he loves bows and his current obsession with the shirt dress.

After all these years, how would you describe your relationship with the fashion industry?

My personal relationship with the fashion industry is better now that I feel more true to who I am. I used to feel like I had to go to every event or party, but that isn’t who I am. At my core, I am a more introverted person. Now that I really understand and accept that, I no longer place as much pressure on myself when it comes to the social aspect of the industry. I now understand my value as a designer doesn’t have anything to do with where I am seen.

How would you describe the style of your brand now vs. when you first launched in 2013?

When I first launched, the core values of what I saw for my brand were there: historical references with clean, modern lines. After a few seasons, I began to lose sight of my vision and started designing for what I thought people wanted rather than what was true to me. This next chapter allows me to continue my original idea for the brand.

What are the benefits of doing drops instead of following a traditional seasonal schedule?

As students, we were told that a fashion show was the end goal, but financially, it can be nearly impossible to achieve when you first start. The world has changed so much since I was in school, and it is great that designers can create a community via Instagram. I like the idea of drops over the traditional seasonal schedule because I can pivot quickly based on my client’s wants and needs.

Where do you find your inspiration?

I find my inspiration everywhere. I am a sponge for visuals, saving anything and everything that makes me happy or intrigued. I often pull from a feeling I get from a beautiful movie or a style of architecture.

What’s one piece that is especially meaningful to you from your new collection and why?

There is something so timelessly classic yet still modern about my shirt dress from this season, and that brings me a lot of happiness. It is an item that feels easy, seasonless and simply chic. I love the idea that you don’t have to sacrifice style for comfort.

What do you think is the eternal appeal of bows?

Bows can often be seen as childish, but there is something very timeless and elegant about them. I love how they are often seen as decorative, feminine and delicate but can be used in a functional way. Pretty and practical are a beautiful combination.

What is your favourite and least favourite trend this season?

I really like the preppy trend. There is something so polished yet cool about how people do it — it isn’t uptight and stuffy.

I am ready to never see athleisure ever again. I understand people want comfort, but I cannot wrap my head around why people are seemingly always wearing clothes fit for a yoga class when they aren’t doing a yoga class.

How would you describe Toronto’s style?

I see Toronto’s style as eclectic. There are so many cultures and people from all different cities and countries melded together. It is a revolving door of different aesthetics, which I find inspiring.

What are you watching or reading right now?

I am a big TV and movie person, so the list is embarrassingly long. Currently, my notable top five are The White Lotus, Master, Suspiria, Euphoria and Fleabag.

What are five items that are bringing you joy right now?