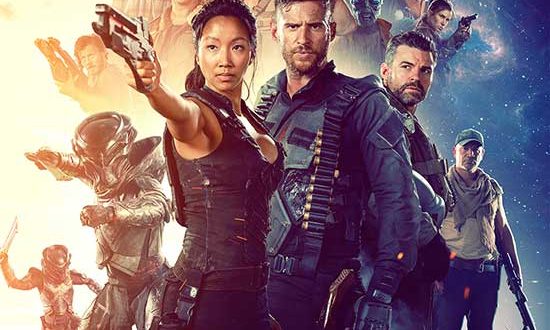 Monster Pictures Media Release: Wed 2 December A WILD AND WAR-TORN DYSTOPIAN VISION OF THE LAND DOWN UNDER COMES TO LIFE IN THE MOST AMBITIOUS SCI-FI FILM EVER PRODUCED IN AUSTRALIA. OCCUPATION: RAINFALL OCCUPATION: RAINFALL the spectacular new Australian Alien Invasion blockbuster, produced entirely independently, will release in Australian cinemas on 28 January 2021.

The film will open across more than 120 screens, reaching a wide audience of sci- fi adventure lovers and will be distributed by genre film specialists Monster Pictures. Directed and written by Luke Sparke and produced by mother and daughter duo Carly & Carmel Imrie (Occupation, Red Billabong) and co-executive producer Todd Williams (The Nun, Alex and Me), OCCUPATION: RAINFALL is an action-packed, unstoppable thrillride that stretches from the scenic hills of the Blue Mountains to the battle-ravaged streets of Sydney.

As casualties mount by the day, the resistance and their unexpected allies uncover a plot that could see the war come to a decisive end. With the alien invaders hell-bent on making Earth their new home, the race is on to save mankind. Luke Sparke: “I had lots of ideas for OCCUPATION that I just couldn’t include on the available budget. With RAINFALL I said from the get-go I’m going to write what I think the film needs, no matter how ambitious it is and then we’ll sit down and figure out how to make it happen – and what I wrote was huge.

A sprawling film with so many action sequences, locations and set pieces. We announced it even before the first film was out, in a way telling the world that Australians can make big films like this. We have the capacity, the crews, the talent, to tell stories on a huge canvas and to get those big stories on screen.”

OCCUPATION: RAINFALL took more than three years to make and features over 1,500
special effects and a brilliant multicultural ensemble cast of Australian and international talent.
OCCUPATION:RAINFALL will release in cinemas nationally on 28th January 2021.