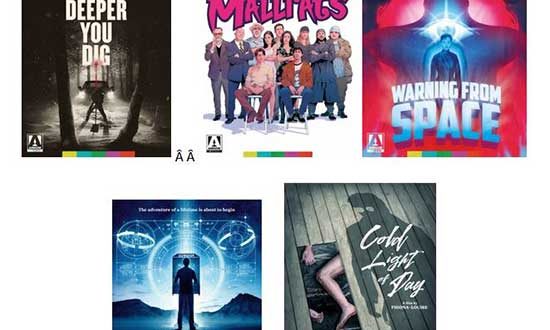 As we officially settle into autumn put on your comfiest, grab a cup of your favorite pumpkin-spiced beverage, and relax with five new Blu-ray releases from Arrow Video.

The releases start heading home on October 6 with the release of The Deeper You Dig. Described by Glenn Kenny of RogerEbert.com as “one of the more striking and effective horror pictures of recent years,” The Deeper You Dig follows a mother, daughter, and stranger as the deal with the aftermath of a roadside accident. The film is a family affair written and directed by husband and wife tandem John Adams and Toby Poser, who also start alongside daughter Zelda. This Limited Edition release also comes with The Hatred, a previously-made feature film by The Adams family, making for a compelling double-bill of original, independent horror.

Would you like a chocolate-covered pretzel? On October 13, Arrow has two new releases, starting with Kevin Smith’s notorious cult classic, Mallrats. The comedy about a pair of recently dumped best friends seeking refuge at their local mall was initially a failure, sputtering at the box office and getting panned by critics. However, the film found a second life on home video, become one of the director’s most beloved efforts. The new release from Arrow includes brand-new restorations for both the theatrical and extended cuts approved by Smith and cinematographer David Klein. The release also includes a shopping bag’s worth of bonus content.

The second October 13 release is Kôji Shima’s 1956 classic, Warning From Space. The first Japanese science-fiction film to be shot in color, Warning From Space is the story of giant starfish-like aliens that land in Tokyo. This release marks the film’s first-ever HD release in American and includes a newly restored English dub.

The month’s final two releases hit shelves on October 27. For those looking for a last-minute addition to your Halloween playlist, look no further than Cold Light of Day. This fictionalized story about one of Britain’s most brutal serial killers, Dennis Nilsen, has largely gone unnoticed over the years, which is a shame because the film is worthy of being on equal ground with the likes of Henry: Portrait of a Serial Killer. This limited edition release includes a brand-new 2K restoration approved by the film’s director, Fhiona-Louise.

Last but certainly not least, is Nick Castle’s The Last Starfighter. Released in 1984, The Last Starfighter has been entertaining audiences for decades. Gamer Alex Rogan thinks he’s just playing another game until he finds himself transported to another planet where he learns the game was actually a recruitment effort. The Last Starfighter lands with a new 4K scan and loads of exciting bonus content.

Yes, Disney World Already Shut Down The Hall Of Presidents For Refurbs During Inauguration Week, Here’s How That Works
New Atmospheric Thriller “The Pond” Premieres at Home February 23, 2021 from Shout! Studios
India’s ‘Master’ Has A Blast In Global Debut; ‘Soul’ Now China’s No. 3 Pixar Pic – International Box Office
‘No Time To Die’ Eyes Second Weekend In October For Theatrical Release; Universal Fills Easter With ‘Nobody’
Bridgerton Cast Has Unfiltered Conversation About Sex, Drugs and Season 2