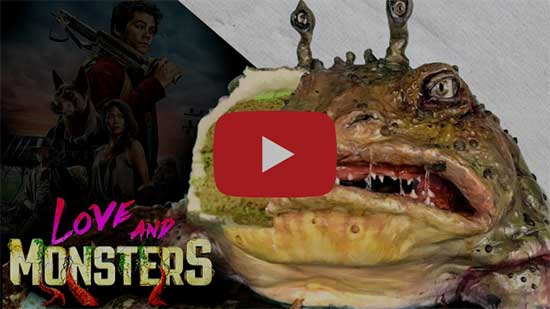 Love and Monsters is now available On Demand and Digital

To celebrate the recent release of Love and Monsters, Sideserf Cake Studio created a cake fit for the monster apocalypse! In the above video, watch as the pool frog monster is brought to life one layer of cake at a time.

Seven years after the Monsterpocalypse, Joel Dawson (Dylan O’Brien), along with the rest of humanity, has been living underground ever since giant creatures took control of the land. After reconnecting over radio with his high school girlfriend Aimee (Jessica Henwick), who is now 80 miles away at a coastal colony, Joel begins to fall for her again. As Joel realizes that there’s nothing left for him underground, he decides against all logic to venture out to Aimee, despite all the dangerous monsters that stand in his way. The fun-filled and action-packed adventure also stars Michael Rooker and Ariana Greenblatt.

Love and Monsters is now available on Premium Video-On-Demand and for Digital purchase!

Rating:
PG-13 for action/violence, language and some suggestive material

Diego Maradona’s Doctor’s House Raided, Investigated for Negligence in Death
Watch Miley Cyrus Set Off Fire Alarm During Prank on Iggy Azalea
A Holiday Gift Guide for Horror Hounds
Ryan Reynolds Gets Bloody, Hangs With His Younger Self In The First Look At His Upcoming Time Travel Movie
How To Watch Tenet Streaming