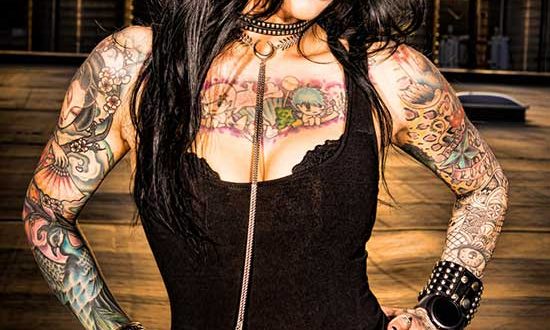 “Covering Bloodletting (the vampire song) by Concrete Blonde came very naturally to me. Johnette Napolitano was a pioneer at bringing a subtle darkness with a sexy swag into heavy alternative rock. She herself said that the song was inspired by Anne Rice and the Vampire Chronicles. At the time the mainstream didn’t believe “Bloodletting” would work but the song went on to become a cult classic and through our interpretation we want to keep that spirit going. Much like Concrete Blonde, our darker side has never been fully embraced so it is as if we were meant to cover this song and keep that middle finger in the air to the mainstream.” – LOLA

Hailing from Denver Colorado Lola Black has kicked and clawed her way to the forefront of the Colorado music scene. With a mesmerizing live performance and a relentless work ethic she and her eponymous group have become the “it” band in Colorado taking in 3 Westword Music Awards putting them in alumni status, landing the title of 106.7 KBPI’s Best Band in Denver and becoming the go to act for national festivals and other numerous radio events. Lola Black has performed at Denver’s largest venue’s including The Pepsi Center, Fillmore Auditorium, Fiddler’s Green Amphitheater and The First Bank Center.

Coming out with with a bang the band released their first EP Dia de Los Borracho’s in 2012 which spawned the single “Borracho” that grabbed attention of Willie B. at 106.7 KBPI and got added into regular rotation climbing all the way up to #4 on KBPI’s play list.

In 2014 Lola put out Till Death do us Part with veteran producer Sid Riggs (Seether, John 5, Juliette and the LIcks) while touring regionally as well as gaining a sponsorship from Jagermeister which would propel them to national stages on the biggest festivals in the country in 2015 including Rocklahoma, FT. Rock, Carolina Rebellion, Kansas City Rockfest, and River City Rockfest.

While continuing to build their fan base and develop a more polished sound Lola Black released their first single produced by legendary producer Bob Marlette (Rob Zombie, Alice Cooper, Red Sun Rising) in 2016 entitled “Sorrow and Sin” which ended up getting in rotation on 23 stations nationwide and climbed all the way up to #38 on the Under the Radar Active Rock Charts!!!!!!

Lola Black spent the majority of 2017 writing and recording a new full length with Bob Marlette and Sahaj Ticotin as well as continuing performing live and growing even more of a fan base.

In 2018, Lola Black released lead single Nothings Gonna Be Alright from their full length album, both sharing the same title. The single went into rotation on 107.9 KBPI! The album was released in late fall of that year.

Going into 2019, LB released a music video for “All In” off of album, Nothings Gonna Be Alright. Currently, Camp LB continues to go full steam ahead with a new single and a music video geared up to be debuted on Dreadcentral.com for the Halloween season. Stay tuned…