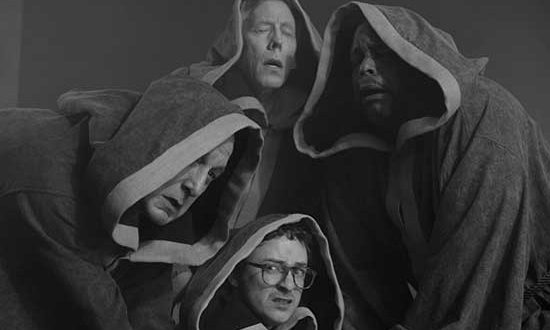 Is there hope for the modern world? Or are we beyond the point of no return?
Griffin Newman (BLANK CHECK podcast, Amazon’s THE TICK, Netflix’s Kevin Smith-produced MASTERS OF THE UNIVERSE reboot) and Tony-winner John Cullum star in the story of an apocalyptic cult whose new recruit gets cold feet on doomsday…

The short is Written/directed by Sammy James, Jr. whose resume includes being a founding member of ‘00s NYC garage band The Mooney Suzuki and a Grammy-winning music producer and composer (SCHOOL OF ROCK, TROPIC THUNDER, Broadway’s KINKY BOOTS)

The 15-minute short “The Acolyte” argues these questions out as Griffin Newman clashes with a clan of pretentious occultists intent on invoking the apocalypse. A Kickstarter campaign to fund the film’s completion goes live today and offers early backers a reward package that includes THE must-have accessory of 2020 – a roll of toilet paper.

“I did consider whether it was in poor taste to solicit cash when people are losing work and cancelling tours, and whether I should postpone the whole thing. On the other hand, unlike a concert promoter who might insist ‘the show must go on,’ doing so here puts no one at risk, yet still pushes art out into the world. There’s so many things we need to stop doing right now, trying to get your art made from home shouldn’t be one of them!” – writer/director Sammy James, Jr.

A brand new trailer exhibiting the film’s absurdist, Dr. Strangelove-inspired take on the end of the world is now viewable only on the project’s Kickstarter page:
www.kickstarter.com/projects/sjj/the-acolyte