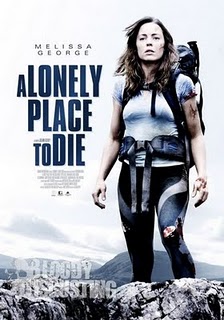 A group of five mountaineers are hiking and climbing in the Scottish Highlands when they discover a young Serbian girl buried in a small chamber in the wilderness. They become caught up in a terrifying game of cat and mouse with the kidnappers as they try to get the girl to safety.

Mountain climbing is scary enough. When you throw in the suspense of a peculiar situation in a dangerous place, you can bet that there’s plenty here to keep you on edge (literally). Melissa George stars as Alison, an expert mountain climber who has had her share of scary situations. This nail biter of an opener provides the edgy ground work needed to keep you in place as the true purpose of the film rolls out.

5 mountaineers take on steep cliffs on a hiking expedition that centers them within the Scottish Highlands. Alison calls the others over as she hears a faint cry for help. Not too far ahead a your Serbian girl is found buried within a box that only allows a pipe for breathing. Startled, they dig her out with the goal of getting her to a nearby hospital. The quickest way to send for help is by descending a steep incline and then hiking another 4 miles. Alison and her friend Rob (Alec Newman) take on the challenge, though Rob falls to his death. Alison makes the descent but only barely. The conditions of the highlands are the least of their worries as the hunters who kidnapped the young girl return to clean house on the hikers.

With long range rifles, a pair of money obsessed thugs (Sean Harris and Stephen McCole) make best efforts to kill off as many of the group as they can in effort to recapture the young child.

“A Lonely Place to Die” delivers its mysteries with an even pace. Alot of the who, what, and whys are not passed over to us without carefully constructing the films grounding within plenty of action. The movie does transform a bit…. as the circumstances and setting change from the unforgiving nature of the highlands mountains to the urban city grounds. The 3rd act is centered within an actual event known as the Beltane Fire Festival.

Sean Harris provides the cold and calculated performance of the film’s Mr. Kidd. Cleverly the film only provides a short instance of compassion as he delivers on a retrospective telling of previous events. Beyond, Harris maintains his purpose and stance never veering from his work and its dreadful realization. We do get a chance to reexamine our emotional morals as things play out. Gilbey forces us to ask a few questions along the way. Would the mountaineers all be better off if they “didn’t” interfere? Are there far more cold blooded killers lurking within societies mask of power? Finally, the root of evil itself….. what others will do for money, how it corrupts.

Melissa George of whom has acted in a fair share of horror films herself, takes her role with confidence but never past what is required for the performance. It’s a solid effort lacking in dynamics at times and void of emotion in other.

Julian Gilbey has delivered a pretty effective British suspense thriller that taps at our nerves more than a dozen ways. “A Lonely Place to Die” provides an extremely beautiful setting similar to action | climbing movies that have come out over the last few years. It’s thriller mode of intention is quickly felt from the first scene and carried out nicely throughout.

What was refreshing about “A Lonely Place to Die” is that it doesn’t rest with just a typical “killer in the woods” scenario. I actually roots itself as a character driven thriller that becomes much more thru its murder mystery crime base. This may pull at viewers in different ways providing thrills that have to be subdued to allow the story to carry out its deeper purpose. A strong effort from directors Julian and Will Gilbey laying the materials that make for one of the great thrill rides of 2011.

In research, it was reported that the brothers took on becoming climbers themselves to better understand what they needed to make the film. A few clips of their footage from this is seen in the end credits.

Tanya Roberts to be Cremated, Ashes Spread Where She Hiked with Her Dogs
Lana Del Rey Details New Album, Promptly Puts Foot In Mouth
The Haves and the Have Nots Ending After 8 Seasons on OWN
Joan Baez to Receive Kennedy Center Honor
As ‘Saint Maud’ Builds Awards Season Heat, A24 Pic Will Hit Theaters At End Of Month & Scores Big Epix Deal