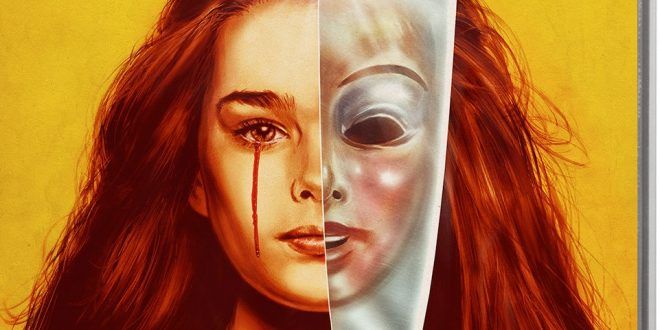 Karen Spages is murdered on the day of her first Holy Communion and all eyes point to her older and jealous sister, Alice, who wants a Communion of her own but is ineligible since she was born out of wedlock. As the body count starts to mount, Alice becomes the prime suspect.

Alfred Sole is a production designer who has carved out a nice career for himself in Hollywood, most notably on the television shows Veronica Mars (2004-7), Castle (2009-16), and the reboot of MacGyver (2017-18). Long before he chose that line of work however, he dabbled in the world of film directing. His first film, the 1972 hardcore sex “comedy” Deep Sleep, must be seen to be believed because despite a few flourishes of cinematic style and several humorous sequences involving dialogue, it’s just a hardcore sex romp featuring folks no one in their right mind would want to see naked let alone copulating. There is absolutely nothing in this film to suggest that he would next direct one of the greatest and most thematically disturbing thrillers of our time, 1976’s Communion (later retitled Alice, Sweet Alice and reissued in 1977). It’s not to be confused with the Christopher Walken/alien-probe-up-the-old-dirt-road 1989 outing based on Whitley Strieber’s 1987 “non-fiction” book of the same name. Mr. Sole’s subsequent films, 1980’s Tanya’s Island with the late and impossibly gorgeous Denise Matthews (credited as “D.D. Winters”) and 1982’s star-studded comedy Pandemonium, both fared poorly at the box office, hence his career change. Thankfully, Alice, Sweet Alice, with its high cinematic style and deceptively low production budget, refused to die.

In her screen debut, Brooke Shields plays Karen Spages (rhymes with “pages”), the younger sister of Alice Spages, the latter brilliantly portrayed by New Jersey-born actress Paula Sheppard, whose only other onscreen credit is the . Karen is favored by everyone around her and can do no wrong, mostly because Alice is a, forgive the pun, holy terror. Alice teases Karen, locks her in an abandoned building to scare her, and mistreats her communion veil. Why the horseplay? Alice was conceived out of wedlock and is not entitled to receive the Holy Eucharist. As if this is her fault.

On the day of her First Communion, Karen is brutally murdered right in the church and all suspicion points to her sister after she finds the discarded veil and wears it to the altar. This sets in motion some truly well-acted scenes wherein the identity of the killer is constantly in question. Everyone suspects Alice, even her neighbor Mr. Alphonse (Alphonse DeNoble), an obese monstrosity you must see to believe. Karen and Alice’s mother Catherine (Linda Miller) is grief-stricken and meets her ex-husband Dom (Niles McMaster) at the funeral. Afterwards, there are suspicions about Alice’s whereabouts during Karen’s murder and Alice submits to a polygraph which she mischievously pushes on to the floor. Her Aunt Annie (Jane Lowry) battles with Catherine and the latter accuses her of hating Alice because of her sinful status. Annie refutes this until she herself is attacked in a shockingly bloody sequence and fully believes that Alice is the killer.

Alice takes place circa 1961 as evinced by the production design, the old-style cars, the calendar on the wall, and the prevalence of a poster of Alfred Hitchcock’s Psycho (1960) that can be seen if one really looks for it. Originally reviled amid concerns that it’s an attack against the Catholic Church (how can it not be?), the film was met with lukewarm box office. Director Sole was rumored to have stated that the church was simply the milieu he wanted to set the story against, but the Blu-ray commentary infers otherwise. It’s one of the most Catholic-themed films I’ve ever seen, even more so than William Friedkin’s The Exorcist (1973) or Richard Donner’s The Omen (1976). It has a look, a feel, and an atmosphere all its own. This film is quite simply one of the best low-budget American horror films ever made. It boasts a superbly eerie score by Stephen Lawrence who scored a handful of other films. Yours Truly has been wishing for a soundtrack album of this music for decades, however one has yet to surface. Great editing, wonderful set design, and excellent music all come together to make Alice an enjoyable shocker that can easily be viewed more than several times.

This film has had a strange history. Filmed in Mr. Sole’s hometown of Paterson, NJ in the summer of 1975, Alice premiered in Paterson (Lou Costello’s old stomping grounds) under its original title Communion on Saturday, November 13, 1976 at the Fabian Theater (now the Fabian Building). The event was met with much fanfare, however a subsequent theatrical release failed to stir much interest. Communion was dropped by the original distributor, picked up by another, retitled Alice, Sweet Alice and was even known as The Mask Murders. It was re-cut and redistributed in 1981 as Holy Terror and played up Ms. Shields’s participation in response to the success of the previous year’s The Blue Lagoon. It then made its way to cable television and local independent stations where the bulk of us caught up with it. Later on, it was relegated to VHS collecting dust in discount bins beginning in 1985 with Goodtimes Home Video, seemingly forever to be lost within the public domain due to a legal snafu. I bought it for ten dollars, which was unheard of in an era when the MSRP on a VHS tape was roughly eight times that amount. In 1998, the film received a laserdisc release from the Roan Group which sported a highly entertaining audio commentary from director Sole and the film’s editor, Edward Salier. The film was given two DVD releases later on which ported over the commentary. Even without the benefit of Sole’s discussion, one can easily see the influence that Nicolas Roeg’s astonishing Don’t Look Now (1973) has on this film.

In 2018, a Blu-ray was issued for this title. The film was restored in a new 2K transfer generated from one of the film’s few remaining 35mm prints and practically restored it to how it looked over forty years ago. I was grateful to have it and it had been a longtime coming. I had heard a rumor for years that Warner Brothers owned the film’s negative, and that appears to be true as this new Blu-ray from Arrow Video is a brand new 2K restoration of the theatrical version from the original camera negative presented in high definition (1080p) and the results are incredible. This is the special edition that is long overdue! If you told me in 1984 that in 36 years I would own a beautiful version of this film with a wealth of extras on a 5” diameter plastic disc, I would have thought you were crazy.

The goodies on this new disc include:

A brand-new audio commentary with Richard Harland Smith who speaks with a great deal of energy, bursting with tidbits and knowledge about the making of the film, with much of the information being revealed for the first time.

The archival audio commentary from 1998 with co-writer/director Alfred Sole and editor Edward Salier from the Roan Group’s laserdisc is included here, too.

First Communion: Alfred Sole Remembers Alice, Sweet Alice (about 19 minutes in high definition) – Mr. Sole recalls how he got started in the film business, by making the aforementioned Deep Sleep (1972), and raised $25,000 to make it. He ended up in trouble since it was made in the homes of holy and elected political personalities. Oops! The film made $12M, but it was confiscated by the FBI and he went on trial. This piece is broken down into four parts: “Story,” wherein he discusses writing with the late Rosemary Ritvo (Terror in the Aisles – 1984), his neighbor, and starting and stopping filming in order to raise more money to continue. “Cast” discusses finding Brooke Shields, Paula Sheppard, and the strange tale of finding Alphonse DeNoble. “Film” discusses finding a cameraman, which was very unpleasant, and rehearsing with the actors. “Post” discusses the magic of editing, especially the staircase scene which has an impressive camera set-up and deserves to be talked about in the same vein (pun intended) as the shower scene in Psycho (1960). “Release” discusses Roger Ebert’s championing of the film, while others shrugged it off.

Alice on My Mind (about 16 minutes, in high definition) – this is an interview with composer Stephen Lawrence regarding his brilliant score to the film. Mr. Lawrence, we need this music on CD!!

In the Name of the Father (about 16 minutes, in high definition) – brand new interview via Skype with actor Niles McMaster who was in the Marine Corps from 1965-68 in the Vietnam War. He then got into real estate, then modeling. He went to New York in 1974 and he was cast in the film. There is a neat article quoted that the film was a “TV movie”, and a tidbit about the director being excommunicated from the Church for making Deep Sleep. It affected him and understandably, Communion was the result. Obviously, this was long before perverted pastors and priests were outed.

Sweet Memories: Dante Tomaselli on Alice, Sweet Alice (about 11 minutes, in high definition) – filmmaker Dante Tomaselli, cousin of Alfred Sole, discusses his longtime connection to the film, explaining that he was six years-old in 1976 and his father owned a jewelry store and provided the costumes for the film. Actress Linda Miller was having a nervous breakdown and going through a divorce from actor Jason Miller and her behavior became erratic, indubitably fueling the emotionally charged scenes. Mr. Tomaselli and Michael Gingold have collaborated on a remake of the film, and I recall reading about this project many years ago. I would be interested to see it get off the ground.

Deleted scenes (about 2:45) – nothing essential to see here, merely curiosity.

Alternate Holy Terror Television Cut – this is a first for home video!

The first pressing of the Blu-ray contains a beautiful booklet with an essay by Michael Blyth who praises the film and quite correctly points out that it is the closest thing to the giallo that American cinema has produced. His final line in his essay is brilliant and spot-on. My only complaint is that there is no mention of Stephen Lawrence’s phenomenal score, which is one of the best ever written for a horror film.

Click here for an excellent discussion of the film.

See Brandy and the Rest of the Moesha Cast Then and Now
How Star Trek IV’s Time Travel Works
The Elderly Style Stars Dunking on Your Quarantine ‘Fits Embrace Their Newfound Fame
For ‘Annie’ Or The Vice Presidency, Auditions Try The Nerves
Bradley Cooper and Jennifer Garner Enjoy Flirty Beach Day in Malibu