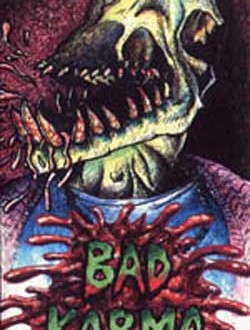 When Dave Jackson celebrates with his friends a garden party, he crosses two bloodthirsty Hare Krishna followers on his doorstep. The two torches not long and provide for hefty blood flow, recently Dave called the emergency alert, which fortunately, run and walk in a SM-Studio the cult berserkers with the appropriate tool in the neck..

An older 1991 extreme-cult entry into the nasty territory, “Bad Karma” is an impressive 36 minute short film directed by Alex Chandon. Shot in the UK, the film stars Dan Barton and Carmel.

When 2 “reincarnation-toting” Krishna doormen come a calling upon a local resident, the woman (indifferent to their cause) is quickly subjected to some nasty wolverine-clawed impalings per a transformed alligator-headed demon. The claws while inspired by the comic book Wolverine still pre-date the X-men movies by almost 10 years, so it might be more accurate to compare them to the 1984 Fred Krueger weaponry. In any case, it looks cheap but its still cool.

Using home-made props and some crafted ingenuity, “Bad Karma” wastes no time into getting into the gore-hound action. It’s old school practical Fx work that gets right to the point with some unrelenting make-no-excuses-violence.

As a group of killer Hare Krishnas make their way around town, it is revealed that they are fulfilling an agenda to complete the cycle of their God, Kalimah (God of the shape shifters) They have 2 days to massacre the town (or so it would seem) to fufil their tirade of chaos. I’ll admit that the accents here are pretty thick at times, so I didnt really catch every detail in the mix. However, my impression is that much of the film was a model for several violent confrontations.

So what can you look forward to? Well there is a vulgar chainsaw-to-the-ass scene when a gang decides to start rounding up the Krishnas and giving them what’s due. There’s some obvious prop-equipped penis castration, a fan to the face, a group of rednecks (complete with a banjo player), a shit-eating-grinned monster, some zombies, head blastings, even a visit from the fetish-toting Mr. Whippy. The rednecks inclusion takes the stage during the 3rd act as the demon-faced Krishnas are infiltrated by a band of ass kicking good ol boys.

The FX team uses every technique they can muster with paper mache heads and carefully planted body parts working on a level that still presents as impressive even with low budget trickery. One might be inclined to make some influential comparison to the movie “Dead Alive” that also injects gore with a goofy practical effects approach. What really works for this piece is its simple over the top approach that uses its monster props and death scenes to the best of its budget. The absurdity here is refreshing and a what makes it all tick.

Alex Chandon has alot of tricks up his sleeve that only makes me want to dig up his other projects to see how farther he takes things. A fun little gory piece full of head popping flavor.