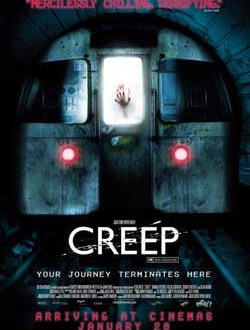 Set in the bowels of London’s Underground and sewer system, this creepy tale of public transportation will make you think twice about snoozing on your next commute to work. After accidentally dozing off, Kate (Franka Potente) awakens to discover that she’s missed the last train from London — and that she may be trapped in the subterranean station for the night. But little does she know that she’s got company. …

A hip young blonde named Kate cruises confidently thru a party exchanging pleasantries with some people and insults with others. She reaches a few girlfriends and brags that George Clooney is in town and she intends to find him and make him another notch on her bedpost! Man is she pissed when she hears that the girl she was meant to go with already left without her. She hustles outside and flags down a cab to give her a ride to the subway station.

Kate rushes into the station and tries to quickly get her boarding pass for the last train but doesn’t have exact change so she is getting antsy and the woman behind her is getting pissed off! A girl who is sitting on the floor with her dog offers up hers and of course now Kate and the other woman both want it. Kate wins by offering her twenty bucks for it. She sits down on a bench to wait and takes a shot out of her purse and swigs on it dreaming of shagging Clooney I’m sure!

Unfortunately for her the buzz really kicks in and she nods off for a bit. She wakes up and realizes she missed the last train and to make it even worse, she is looked in the station for the night! Disgusted with herself she looks for a way out. Suddenly a train flys up and she hops in. Poor Kate sits down and sighs a breath of relief – I mean who the hell wants to be stuck in the subway station over night? Besides being empty the place is dirty, empty, and crawling with rats and bugs!

The train comes to a halt and minutes later the lights go out. I would be scared to death but Kate seems to be handling the situation pretty well. Looking towards the end of the train she sees someone with a flashlight slowly coming towards her. She tries to ask who it is but they will not answer- here it ends up being an annoying man named Guy from the party who got her signals all wrong and thought she wanted to hook up with him.

After a quarrel and physical confrontation Guy is ripped from the subway car by God knows what! Kate screams and runs at the first sight of blood. This poor chick’s night is about to go from bad to worse in five minutes flat! Soon you will see what lurks within the darkened tunnels beneath the decrepit public subway. The first glance she got of him made me jump and think I would honestly have a heart attack if that happened to me.

Now she has to run for her life in totally unknown territory for her but to him it’s like the back of his deformed hand. The diseased looking creature of a man stalks people and puts them in his sewer grated holding cell until he’s ready to play with them! I couldn’t figure out if there was more than one of these men but I think it was him all by his lonesome self. After Kate is in the sewer holding type tank her and a man mange to escape.

They are trying desperately to find a way out of this mess and come to a room hidden with in the tunnel walls. It’s set up like some sort of surgical room with all sorts of tools and instruments. There is even that girl who sat on the floor with her dog strapped into what looks like a birthing chair. Her dress in the front is bloody between her legs making you think of what horrible things could of been done to her. Kate loses it and starts to freak out crying drawing attention to where they are!

Will Kate live to tell her story or will she end up a victim in that surgical room? Is it possible to beat this monster at his own sick game? You need to see Creep for yourself to find out these much wondered about answers!