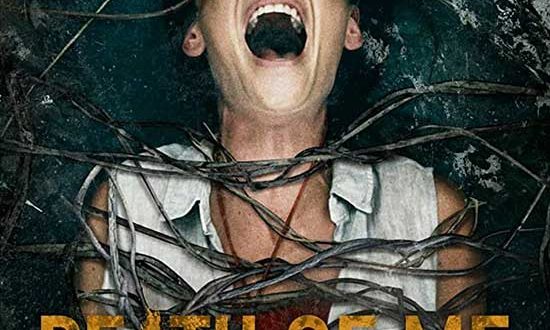 Vacationing on an island off the coast of Thailand, Christine (Maggie Q) and Neil Oliver (Luke Hemsworth) awake hungover and with no memory of the previous night. They find footage on Neil’s camera, and watch, horrified, as Neil appears to murder Christine. With twenty-four hours until the next ferry and a typhoon threatening the island, Christine and Neil attempt to reconstruct the night’s events—and are snared in a web of mystery, black magic, and murder.

Ari Margolis, James Morley III and David Tish wrote Death of Me. Darren Lynn Bousman (Saw II, Tales of Halloween, Abattoir) is directing Death of Me. Maggie Q portrays Christine. The opening scene is beautiful. (Quarantine has made me think about the whole world and how much I’d like to see every place I can.) Darren Lynn Bousman is a fine director, I think at times, maybe he sees something extra that someone else might now. “Is that blood” should never have to be an opening question. Christine keeps looking at a necklace, she doesn’t recall where she got it. (The necklace is really bugging me. Is it voodoo? Did someone die?)

Christine (Maggie Q) is on vacation. It looks like heaven. Christine wakes up, she seems confused, hungover and doesn’t know what happened. (I’ve had that look occasionally. Never judging.) Neil (Luke Hemsworth) must be the equally hungover boyfriend? Neil is moving a little slow and they are late. Neil and Christine are trying to make the ferry. Christine’s identification and wallet are missing. Neil advises the lady in charge there is a storm coming. The ferry took their luggage. (All of the sudden, I don’t trust Neil.) This movie is a thriller, horror but also has a psychological edge. I say this because you don’t know. As usual, the unknown is creepy.

Christine and Neil start to watch the footage from Neil’s camera. They meet Madee (Kat Ingkarat), the “hot waitress.” Christine finds out where her “gift” came from. Christine is starting to look like she’s going to pass out. (Mind you, they watched Madee pour something strange into both of the drinks. Ummmm…. HELLO!) It gets a little weird, okay real weird. Neil is killing Christine on camera… and burying her? Christine is freaked out! (Can’t blame her.) She also had bruises on her neck now. Maggie Q does a great job with this character.

This movie is like a mind-trip. Alex Essoe shows up. (Thank God, she will fix everything!) She wants to know what is going on? (I would also like to know.) The calm music makes it creepier. They get Christine to the doctor. Alex’s character knows the doctor on the island. The doctor thinks she was given something that makes you hallucinate. (Do doctors ever really listen?) Christine is scared and Neil wants to give her some space, maybe split up.

Alex Essoe showed up. I thought, okay, everything is going to be fine. Everything is fine… And, all of the sudden, EVERYTHING IS NOT OKAY.

Christine is throwing up a snake now and Neil is trying to photograph a festival and all sorts of bizarre things happen. Christine disappears for a while. Christina and Neil head to the part of the island where they were advised not to go. They find Madee and she isn’t phased at all. There are a few films that stand out when it comes to the occult, Rosemary’s Baby (1968) Angel Heart (1987), The Ninth Gate (1999), The Wicker Man, The Skeleton Key (2002), The Serpent and the Rainbow (1987).

Some of those films have supernatural and demonic features but they have this intense creepiness with voodoo and the occult. Is this a dream? It feels like Requiem for a Dream meets The Serpent and the Rainbow. Everyone is offering Christine drinks, maybe she should go buy her own UNOPENED drink. Maybe destroy the necklace? Christine needs a doctor again. WHAT! This is a twist.

Christine learns a lot. She learns some secrets, some things she may not want to learn. Kanda (Kelly B. Jones) is trying to help Christine. Midsommar (2019) was another excellent film that took on this strange turn of ritual events. (If you are planning a getaway, you may or may not want to look in to the “traditions” they celebrate. You know rituals, sacrifices, things of that nature. To be on the safe side. #HelpfulHorror)

There is a storm, Christine is involved in some of Midsommar nightmare version of a ritual. Again, is it a dream? This is not what you expected, that’s for sure. Death of Me is a roller-coaster. Make sure to check it out.

Alisa Reyes on ‘All That’ ‘Memba Her?!
Simon Pegg Not-So-Fondly Remembers One Of Tom Cruise And Christopher McQuarrie’s Unfortunate Mission: Impossible Ideas
The House In The Pines – Official Teaser Trailer
Watch the War on Drugs Perform “Arms Like Boulders” on Colbert
Official Trailer and Poster – ADVERSE On Demand and Digital and DVD March 9