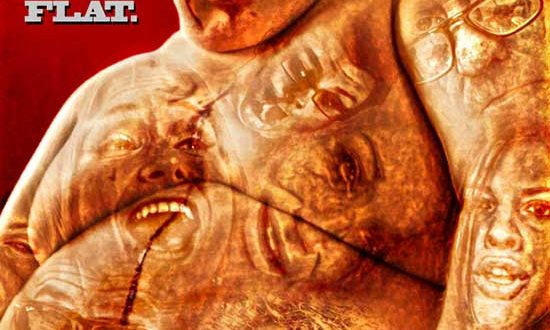 A selfish filmmaker fails at creating the cutting edge freedom of speech documentary he had envisioned and inadvertently unleashes holy hell from a 500 pound comedian on the verge of a nervous breakdown. A big fat dose of nightmare fuel for the politically correct!

Presented as a documentary, Flesh Blanket follows filmmaker Brandon Graham, playing himself, as he tries to put together a no holds barred, in your face, free speech comedy festival in memory of the late great Lenny Bruce. In doing so, Graham brings together a rag tag gang of comedians to travel with him across America and stick their fingers up at the PC crowd. Take THAT society!

However, the course of biting one’s thumb at society never did run smooth. Every now and then through the narrative, we take a break from all this anarchy to sit down with Graham who, two years after the tour, is still lamenting the horrific events we’re about to see unfold and how they’re centered around one comedian in particular: Ramsey Moore.

Hey, gentle reader, here’s a health and safety warning: You’re going to want to put on some industrial strength gloves before you pick up Flesh Blanket, so you don’t cut yourself on all its edginess.

Amidst all the flashing of breasts and teenage boy one liners being thrown around, Moore is shown to be somewhat removed from the rest. He doesn’t like their attitude and refuses to leave his room during rehearsals until he’s sure everyone understands how important the legacy of Lenny Bruce is. So far, so pretentious. Things kick up a notch later when during a lighthearted game, Moore details how, as a young boy, his baby brother drowned in the bath and his family forced him to pretend everything was okay until after his father’s election campaign was over for fear it would put people off voting.

All this oversharing and unaddressed hostility at life soon bubbles over, and Moore begins to kill his fellow comedians one by one; recording everything for posterity via his own handheld camera. If you’re thinking, ‘so like Peeping Tom?’, I must ask that you put down that ill-judged comparison for fear that you will think this film is something it’s really not.

Moore, who co-wrote the film and sadly passed away before its release, interrogates his victims seemingly for days, trying to break down their defenses before he viciously attacks them. There’s nothing really to write home about in any of these moments, until the end when Graham pulls out a POV sexual assault via video camera, which sums up pretty much everything you need to know about the film. Flesh Blanket is a sneering, profoundly unfunny and boringly bleak horror comedy that offends simply because of how offensive it’s trying to be. It’s a film for people who think shouting ‘snowflake’ at others is still a reasonable political debate.

Does it have any redeeming qualities? Well, sort of. Moore is actually excellent playing a murderous version of himself, adding some reality to the situation once it spirals out of hand. Equally, Graham’s on the record decision to not let half his cast know what they were actually making means there’s a real sense of confusion thrown into the mix. This blurring of the lines between fact and fiction is a similar trick pulled off by J.T. Petty in his moderately successful look at the link between voyeurism and horror, S&MAN. But even then, these plus points about Flesh Blanket are just a tissue being asked to soak up the multitude of problems that drown out the narrative in a film which is called Flesh Blanket.

If you like exploitative horror than you may be in for a treat, though you’ll be sitting on your hands for a large part of the film, watching a group of real life comedians take drugs, get drunk and fail to get laughs in a night club.

If you want real comedic horror about stand up, go watch Ricky Gervais’ latest on Netflix.