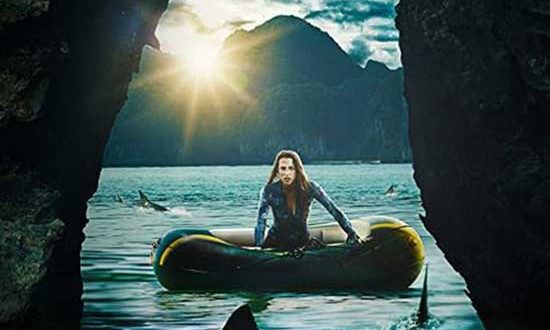 In the aftermath of a plane crash, a woman fights to survive a pack of killer sharks.

Frenzy, directed by Jose Montesinos (Dream House Nightmare) and written by Graham Winter, is one of several shark themed movies unleashed from the SyFy Channel. In fact, reading that sentence will no doubt conjure up in your mind the kind of film this could possibly be. Throw in the fact that Montesinos co-directed 5-Headed Shark Attack and you’ll likely be willing to put money on what genetic abominations await within this TV movie. Well, hold on to your cash, Bucky, because I want you to be able to pay your bills.

Whilst Frenzy does indeed include a pack of sharks as its fishy antagonists, they are by no means distinct in their appearance. They’re not zombies, ghosts, weather based, underground, over ground or wombling free. They’re just sharks. They don’t even have frickin’ lasers on their heads. So, if they’re not paranormal sharks leaping out of glasses of water, I hear you cry, what are they doing?

Let’s step back a bit. Frenzy follows a group of thrill seeking vloggers who have made a name for themselves doing extreme touristy stuff. The leader of the group is Paige (Gina Vitori, Tomb Invader), whose hunt for new experiences around the world has left her with a bit of a following online. When Frenzy catches up with Paige and her team, her sister Lindsey (Aubrey Reynolds, You May Now Kill the Bride) has tagged along for the ride. There’s the suggestion that Lindsey lives in the shadow of her sister, never really wanting to cause a fuss. So, when Paige organizes a trip to do some illegal scuba diving, this is so far out of Lindsey’s comfort zone it’s in a different area code.

You know what else is out of Lindsey’s comfort zone? Plane crashes. So, it’s shame that the plane the gang are on crashes in the middle of the sea whilst on route to their hedonistic swim. Stranded and alone, with a slim chance of help coming, Lindsey has to use her minimal skills to save her sister and her friends. Unfortunately for her, a shiver of sharks have come to investigate the thrashing around happening on their turf.

Whilst Frenzy is ostensibly a survival flick, with Lindsey trying to figuratively and literally keep her head above water, it’s not the same as 47 Meters Down or The Shallows. Rather, Frenzy is broken in up into little vignettes that look at the relationship between Paige and Lindsey in the lead up the plane crash. Each little trip down memory lane feeds into Lindsey’s search for courage within herself, while also attempting to add layers to the siblings’ seemingly fraught relationship.

Does it work? Well, if you’re looking for some soap opera in your shark flick then maybe it’ll do something for you. Unfortunately, for this critic, Frenzy’s good intentions are largely forgettable. It just doesn’t excite or get you in the feelings. As the film progresses and we learn more about what makes Paige and Lindsey tick, it all just seems superfluous. Scenes just drift by with seemingly no consequence.

What does stand out is the use of CGI in the film, which at least gives Frenzy something it can have in common with its peers. Whilst used sparingly, it does strip away any dramatic tension a scene raises when Lindsey is seen desperately trying to swim away from a screensaver.

Fair play to SyFy Channel for trying to knock something out that was a little bit less on brand for them, but as experiments go, it didn’t work. Maybe, just maybe, having exhausted all possibilities, it’s time to put shark movies to bed.