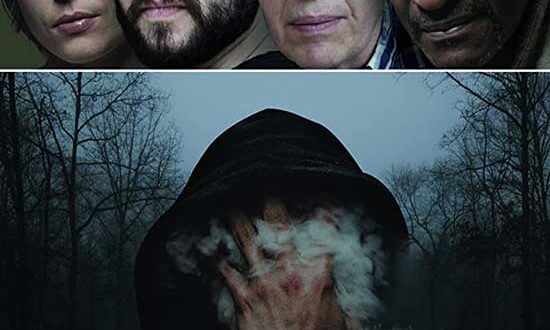 “Thrown into the face of death only to emerge unharmed, the characters of Immortal are left staring at eternity in the face with uncertainty and fear like they’ve never imagined. The film follows Chelsea, a high school track star who comes clean about sexual misconduct with her coach only to find out her confession might be too late, Gary and Vanessa, a young, expecting married couple who scheme a morbid solution to their financial issues, Ted, a man filled with sorrow who agrees to euthanize his cancer-ridden wife Mary, and Warren, a young man with little direction in life who is forced to discover his new gifts after a tragic accident.”

The movie tells four different stories. Each one of them is life-altering. They challenge humanity and what happens in the world. What happens in everyday people’s lives.

We meet Chelsea (Lindsay Mushett) is the one. Mr. Shagis (Dylan Baker) is teaching his class. A class full of students, the class clown, the cool kids, a variety. Mr. Shagis has a conversation with Chelsea (Lindsay Mushett) after class is dismissed. The coach, Coach Jacobs (Michael Shenefelt) may have touched Lindsay inappropriately. She doesn’t want to talk about it. So far this movie is diving into the deep subjects. (If someone ever does anything to you, TELL SOMEONE!)

The #MeToo movement brought certain people and things into the light but assault, sexual assault to women and men has been going on for years. People will often dismiss things with, “oh, it was a joke” or “oh, he/she didn’t mean it that way.”

Coach Jacobs (Michael Shenefelt) is watching the track team run. He is watching in an uncomfortable way, or at least they make it look that way. We briefly meet Ms. Jensen (Christine McCann). The coach spots Chelsea and wants to walk her to her car. Chelsea declines and is shot in the neck with a tranquilizer dart. (OH MY GOSH!) They show her being carried into the woods.

I don’t even want to say who it is; YOU need to watch the movie. The Lord of The Flies is mentioned in quite a few films. It is interesting how “bad guys/villains” are portrayed at times. Chelsea is in the woods and given a chance to run while the kidnapper unloads various weapons, an “arsenal” of weapons. There are traps along the escape route. This is wild. This movie is wild. It’s like SAW in nature. People often do take so much for granted.

The person who took Chelsea tells her his story and why he is doing this. He is now a “hunter of men.” The calmness and the fact that this man thinks what he is doing is okay. There is a peaceful madness. He is IMMORTAL apparently. We learn this quickly and why did he pick Chelsea for this challenge? “You run fast.”

Tony Todd is in this film, so I instantly thought about Final Destination. The chances and how life works. Do we all have a path to follow? Is life mapped out? Are we pre-destined for certain things? Do “good” people suffer more? Do “bad” people suffer more? The villain right now is considered a good citizen. Serial killers like Ted Bundy and John Wayne Gacy were considered “good” people in their communities.

We meet a couple now, Vanessa and Gary. She is pregnant and making breakfast. He is trying to get the cable turned on. Vanessa (Agnes Bruckner) is trying to help her husband figure something out. “Everything happens for a reason.”  Gary (Brett Edwards) gets an unexpected visit by Carl the cable guy, (Mario Van Peebles). Gary and Vanessa are trying to make things better for the family they want.

Ted and Mary are next. Ted (Tony Todd) and Mary (Robin Bartlett). A film crew shows up to talk with Mary. Alex (Vanessa Lengies) is leading the film crew. Tony Todd and Robin Bartlett are incredible in the roles. Ted and Mary are sharing a story of a life they share together. Tony Todd delivering life altering, life lesson worthy lines. The filming showing the two of them talking in different rooms and then shown together on split screen was beautiful. They could finish each other’s sentences.

Ted talks about scheduling events. Mary has cancer and they are considering assisted suicide. “Dying’s a lot easier than making a life.” Is that life? We are here, we live, we pay bills and we die? Mary (Robin Bartlett) delivers a beautiful performance. Mary talks about pain. Pain is really something. Whether it’s physical pain or emotional? The writer’s got the medical situations right. Sometimes the doctors don’t believe people.

Tony Todd delivers Ted as a man who has lived life, married his best friend and now he is losing her and himself. Ted and Mary’s story is sad. It’s beautiful but sad. “Pain is a strange thing,” that resonates. Time is a funny thing. To some people it doesn’t exist, pain is something that takes pieces and parts of life away. Mary and Ted are planning something and it doesn’t go as expected. This is heartbreaking. Vanessa Lengies delivers a strong performance. Alex isn’t just making this documentary; she sees these two people.

Warren (Samm Levine) is in a playground, smiling, thinking? Maybe he is reliving memories. He gets a phone call from his mother, it’s his birthday. He is thinking about life. The endless meaning of life. What does it all mean? Why are we here? Warren isn’t paying attention and whoa this insane.

Warren uses the internet to his advantage. The internet is not short of knowledge. This anthology is nerve wracking because Warren does his own investigating. He could get caught, who knows what could happen? Sonia (Joanne Verbos) and Chuck (Ben Reed) are a couple and there is a life lesson here. They did good with making this film different.

Make sure to check out IMMORTAL.

What’s Worth Watching in Netflix’s Top 10
Jasmine Tookes and Josephine Skriver On How the Fashion Industry Has Changed
The Ganzfeld Haunting (2014)
Film Review: Ghost Ship (2002)
Bershan Shaw in Running to Be First Black Cast Member on ‘RHONY’