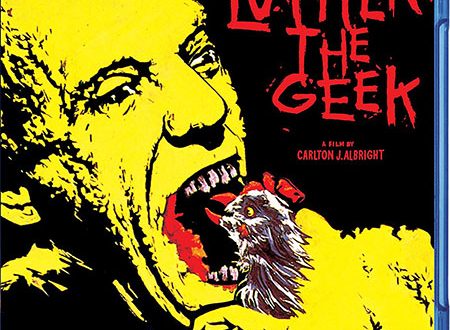 As a young man Luther watches a geek being goaded into biting the head off of a chicken, by a torch wielding mob. Somehow related to this, he trips, knocking out his front teeth and tasting his own blood. Upon that taste, for reasons beyond logical understanding his psyche is damaged beyond repair. Years later he is released from prison, a grown Luther now looking like a less put together John Malkovich, goes on a murder spree. Clucking like a chicken the entire time.

Luther the Geek is a Troma movie, and to a certain degree that’s all of a review this requires. Either one likes their sort of films or they are considered garbage. Some people have thresholds concerning the amount of pus they want to see leaking from rotting wounds. It’s gross, violent, and bordering on the edge of a slapstick comedy at times. The reason that Troma has continued to be in the zeitgeist is their ability to make cult movies not even cult movie lovers can sit through. “Luther the Geek” is an admirable addition to this storied reputation.

Unlike similar Troma movies released in the late 80’s early 90’s there’s real sadist’s intent to the metal-toothed geek Luther. Made all the more unsettling by the lack of dialogue and constant screeching chicken noises he makes.

The plot is stripped to the very barest of essentials. A young boy is hanging out with a torch wielding mob at a carnival. They come across a man in a cage. As is custom in this great country they begin to chant ‘geek’ at him with a fair bit of ire. During the performance of ‘man vs. fowl’s neck,’ the boy trips and hits his face on a wagon wheel, knocking out his front teeth. He tastes his own blood, which immediately drives him insane. He reaches into the cage and tastes the recently beheaded chicken’s blood. It’s not terribly clear why any of this is happening, the film quality is poor and the directing poorer.

Cut to some years later, at a parole hearing for Luther. It’s revealed that his bloodlust had only grown. He had bitten and killed several people as a teenager. Luckily, he’s all better, a model prisoner even, and his release is granted. It was only murder after all. What’s the worst he could do as a free man?

Luther tasting freedom for the first time in ages he does the first thing most if not all of us would. The geek goes to a store and eats a bunch of raw eggs. Unfortunately having spent 25 years in prison, he is not rehearsed in society’s rules of eating embryos in a grocery store without paying. The management asks him to leave.

A dejected man, not sure of his place in this world he begins to have an existential crisis. Deciding that all life is chaos, he attacks the woman sitting beside him. After biting the old woman’s neck, he runs and hides in the back of a lady’s car. He hitches a ride to a farmhouse where her teenage daughter is returning with her boyfriend.

As far as story goes, that’s basically it. There’s a slasher movie dumb cop later introduced who spends ten minutes walking around a dimly lit barn. A farmhand also shows up for a few seconds, specifically to die. There’s no twist or lessons to be learned, except perhaps don’t release murderers from prison. Luther is a crazy violent man, who shows up in an unconnected woman’s life and does crazy violent things.

The acting can best be summed up by saying it’s worthy of being straight to VHS. Edward Terry who plays the titular, Luther is far and away the strongest, being quite menacing in certain moments. The mother and daughter have laughable deliveries which may be why they say so little. The daughter exists for the required extended shower/sex scene, she does nothing else.

I’m pretty familiar with the Troma catalogue, but I had never heard of Luther the Geek. It’s aimed at only those looking to view the complete Troma repertoire. It contains a strange mix of sadism and comedy with a low budget and little talent.

How to Tone Your Hair at Home
19 Black Families Buy 90-Plus Acres in Georgia to Start Safe Community
Netflix Drops First Look At Kurt Russell And Goldie Hawn In The Christmas Chronicles 2
We Are Who We Are Season 1 Episode 1 Review: Right Here, Right Now #1
Marvel’s Kat Dennings Responds About The Handling Of Chris Evans’ Viral Nude Photo Leak