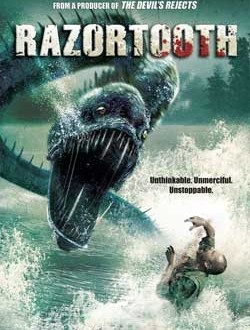 When four college students trek to the Everglades to conduct extra-credit research for their biology professor, they become prey to a huge man-eating eel with nasty incisors that’s been terrorizing a nearby Florida community. As they try to kill the bloodthirsty beast with the help of a few local residents, the kids uncover their professor’s true motive for sending them to the swamp. Patricia Harrington directs this chilling horror flick.

Over the past few years, the Nature Run Amok genre has itself run amok. “Snakes on a Plane”, “Snake on a Train”, “Anaconda” and its endless sequels, “Frankenfish”, and the list goes on and on. Some of these films were a blast to watch, others, not so much. Now this genre continues to grow, especially in the ultra low budget direct-to-dvd arena and its latest offering “Razortooth” brings a new monster from the deep to the surface: an eel. An oversized, genetically engineered eel that’s out for blood. Sounds pretty fascinating, too bad the execution reeks of dullness.

Delmar Coates (Doug Swander) is the head of animal control, he is used to dealing in rats and the like. Until one day things take a change for the worst when the locals of the small Florida town end up dead, eaten by a large creature that he suspects may be a giant eel. He enlists the help of the local sheriff Ruth Gainey Coates (Kathleen LaGue), who also happens to be his ex-wife, to find the problem and help him rid of it. Problems arise when two ex-cons show up, a group of college kids arrive to help Dr. Soren Abramson (Simon Page), who knows more than he leads on, a group of missing canoe club kids, and an angry mob of parents.

The film opens with the two escaped convicts on the run from the police. They take refuge in the swampy marsh only to have the police on their trail slaughtered by the creature. Delmar, is sent on a couple of calls to investigate what is thought to be a huge snake hiding under a porch and to look for a missing dog. Four college students looking for extra credit, hook up with Dr. Abramson for what they believe is research to keep eels from threatening the ecosystem. The local canoe club has a day out on the water, while Sheriff Coates is leading a team to help catch the cons. There is a large group of characters that are never developed, just caricatures and stereotypes. The only characters of interest are Delmar and Ruth. A couple that had long separated but rekindle what they had lost through the course of the film. Kathleen LaGue and Doug Swander have a likable chemistry, they’re fun to watch and good performers. Some of their banter is a bit hideous but the actors step up and rise above, if only slightly, the material they were given.

The rest of the cast just sort of annoyed me, ALOT. Especially the four college students. The dialogue was tedious to hear, the way they acted, moved, even died, just grated on my very last nerve. I actually had to shut the movie off twice because I just couldn’t stand watching them. Once they were eliminated from this overly large equation, I felt a little better but the damage had already been done. This was an overacting extravaganza, with exaggerated facial expressions, actions, laughs, etc., causing me to grind my teeth and bite my tongue.

I prefer a big reveal later in the film before we see the main creature, especially if you lack the budget to have one that seems truly menacing. Director Patricia Harrington opts to show us the creature immediately and silly looking is an understatement. It never looks frightening or even blend into the scenery. It was so distracting to me that it took away from any story element I may have been enjoying. Maybe I am way off base here and it was intentional, but this giant killer eel looked so ridiculous that I laughed out loud when it first appeared on screen. Not exactly a good sign. There is plenty of the red stuff splashed around but the majority of the gore was either horrible looking CGI or looked like bargain bin buys from a Halloween USA store.

The script, written by Matt Holly and Jack Monroe, is filled with cliches and rotten dialogue. Now, this could have been a really fun film, but they never seemed to know what the overall tone of the film was going to be. It tried to be funny, it tried to be scary, but never succeeded at either. The humor fell flat and the scares where voided out by how dumb the eel looked. This could have fallen into the “so bad its good” category, but never quite made it there. It had a few moments but not enough, it’s just bad. I hate to bash on a movie, these folks invested their time and money into making this and they obviously had fun but damn, this is not a good.

The majority of the film takes place in the daylight and serves itself well. You get to see alot and the scenery is pretty nice to look at. It was shot very well with the exception of a couple of shots near the end where the lighting didn’t match up too well from shot to shot. The scenes that did take place at night suffered a bit from poor lighting, unless it was intentional to cover up the silliness that was taking place.

“Razortooth” was not a good movie. You can give me the the excuse, “It was a B-movie, what did you expect?” all you want, but it just doesn’t change the fact that this is a tough movie to get through. While I found the two leads to be interesting, the rest of the cast just drove me away. I highly doubt we will be seeing much else from this crew and Harrington should choose her next project wisely and try not to be so overly ambitious and maybe she can pull together a genre film actually worth watching. This one isn’t.