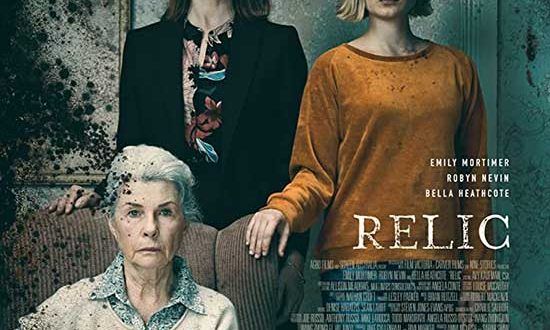 A daughter, mother and grandmother are haunted by a manifestation of dementia that consumes their family’s home.

Watching a loved one going through the deterioration of disease is one of the worse horrors anyone can go through. But if your loved one became the horror? What if someone you loved became so unrecognizable in the mania that you became frightened of them?

Relic comes from director Natalie Erika James and a lot is being said in this film. The film follows Kay (Emily Mortimer) and her daughter Sam (Bella Heathcote) as they travel to attend to Kay’s mother Edna (Robyn Nevin) who is becoming increasingly disturbed and volatile. Kay and Sam go to look after Edna and have differing opinions on how to deal with their situation. Relic is a film that takes its time. The first half of the film establishes the characters and their relationships with each other. We get the sense that these three generations of women and the complicated relationships they have with each other.

Sam seems to have a rocky relationship with her mother but loves her grandmother. Whereas Kay seems to have some unresolved issues with her mother and even seems to see her as a burden on her life. There seems to be something in Kay and Edna’s past that affects their relationship today that the film doesn’t explore, It could be exploring the idea of intergenerational trauma and how it affects families but this is just speculation. These moments of family drama make it aware that this is not just a haunted house film or a possession film. It is a family drama about the effects that families can have on each other’s lives, and how even if you love your family, they can also be a burden on you. All 3 actresses give great performances but Bella Heathcote was the MVP of the film for me. Her dual relationship between her mother and grandmother was very realistic and she invoked so much fear and dread during those tense scenes.

Much of the film is spent in Edna’s home where there is a constant feeling that something is in this house. Not another person per se but a presence that lingers and feels you with dread. You can’t see it but its presence is felt. Is it something supernatural? Or merely the fear of these characters brought about by the feelings of grief and sickness? Much is left open to the viewer and will probably require multiple viewings to find every meaning. This film is a slow burn for sure, it takes it’s time and relies more on character and atmosphere rather than fast-paced chases or jump scares. This won’t work for everyone, I love slow burns but I did think they could have picked up the pace a little bit in the middle. The last 15 minutes of this film are so intense though. I found myself fidgeting in my seat as I nervously anticipated what would happen next, the slow burn was worth it for sure. I won’t spoil it but I will say there is some truly disturbing body horror in those last 15 minutes that I’m still thinking about. Body horror truly disturbs me on a personal level when it is done effectively.  Probably my biggest problem with the film other than the pacing is I’m not sure what it’s trying to say, now that could be deliberate and might require a second viewing but it’s worth noting as it won’t work for everyone. This will be a hard film to categorize into what subgenre of horror it falls into.

Relic is a slow burn with a truly disturbing climax that left me haunted and wanting answers. Something speculation about the meaning of the film is more satisfying than having it told to you. This might be too slow of a film for the casual horror filmgoer but is something to check out for sure for the performances alone. You might wanna watch the climax with the lights on.