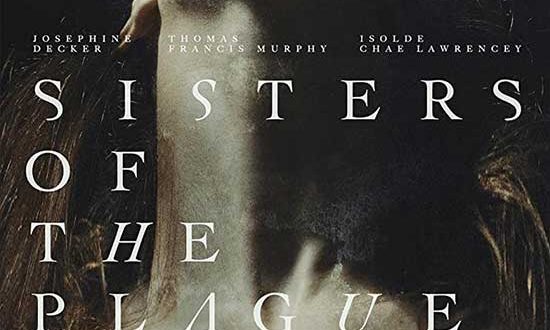 Sensing evil, a haunted house tour guide seeks a medium’s help only to be warned that she is facing a vengeful power beyond her control.

In the places it succeeds as a horror film, “Sisters of the Plague” effectively uses creepy music, cinematography, and forest settings to create a sense of foreboding. I’ve related to you many times before that it’s this sort of thing that I prefer to the so-called “Grief Horrors” coming out with such frequency. This film uses its sense of creepy cinematography to ratchet up the tension and fear. Furthermore, the setting in an outskirts town makes for a damn creepy experience. Unfortunately the experience falls flat when too much attention is given to the girl’s sick, desperately-coughing father. Her lesbian roommate wants to be rid of him once and for all. It reminded me of Poe’s “Tell Tale Heart” the way they discuss the annoyance of the old man here.

The film begins with a kissing and sex scene between lesbian lovers. It’s somewhat interesting but not as much as it needs to be to get this film off the ground. As this sequence repeats in her dreams, the sex turns to killing and it’s easy to see what might be coming. As Kate and Jo warble through their couples’ issue. It amounts to terrible dialog like this: “You fuck things up,” one says, “No You fuck things up.” As the badly written lines continue they say “cunt” for good measure. It’s too bad that more rational dialog that makes sense was included. It definitely isn’t here. I have shared here before I hate the new trend of “Grief Horror” along with ones that show pointless sex. I mean, aren’t there pornos if we want to see that? The sex scenes in this are less than titillating (no pun intended).

Our director, Jorge Torres-Torres is just as pretentious as his last name. If you want lesbian scenes, it falls short here. If you want straight simple horror, also not here. You will likely enjoy the creepy backgrounds and scenes in the forest but the lead actress grunts in sex as well as the ghost-centered plot will fail to save it. I won’t play it down completely because the visuals are just short of amazing. It’s worth the watch for those. He has only directed 3 films and this one is the biggest scale. I don’t think he should continue with horror because the idea that lesbian sex and really bad writing which includes athetic screaming a lot is the last thing a horror fan wants to encounter in their 1.5-2 hours we give for a film. She becomes possessed by some kind of ghost or demon, gets naked in a lake, appears to be bitten by another human before getting out of the water in slo mo, still naked. Her lover wants them to kill her dad but it would appear cuningulus takes her away in the film. Then, the dream sequence (I hate those in horror, such a copout) appears to be the straw that broke the camel’s back. Jo drives her dad to town and appears to be under a trance. If the plot seems convoluted, it isn’t my fault. I had a very hard time following it.

One part of the plot that comes through clearly is Jo’s lover wanting to kill Jo’s father. In an elevated tension part, her lover is alone with Jo’s father and she starts crying, assumedly torn as to how she is to kill him. Meanwhile Jo is attacked in the city alley by the sound of hailstones. They should have simulated them it would have presented a lot better than this highly awkward possession scene. Jo eventually kills her dad, in some ways putting him out of his emphysema torture. After thinking about it carefully, I can tell you it may be one of the least scary possession ones in my recollection. The message of the film seems to be: “Be careful when summoning the dead.” Blah, boring, seen it before done way better. For example, I love the way it’s done in “the Omen” and “Primal Fear” (Ed Norton). If you watch ”Sisters of the Plague,” watch primarily for the creepy forest and other visionary cinematography, that’s my 2 cents

The actors are all bit players getting a crack at better roles. While I admire the long length possession scenes and what he tried to do, Torres-Torres misses the mark by a million. If I had to give you a positive about the film, I would say the few and far between forest scenes are the creepiest. The music is also very good though not always well-placed. I hate when I’m trying to follow a plot and the music chokes my experience, and lame mouth foaming scenes in slo mo that seem to never end. Other than that though, it works phenomenally well for an indie.