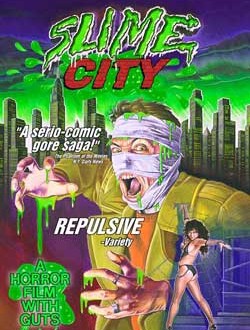 The narrative is about a beleaguered artist who rents a cheap apartment house. As the story unfolds we see this apartment building was once home to a cult which takes satisfaction in turning humans into slime and then locating a host body for all of this slime. The plot covers all of the classic subplots, such as, reincarnation, murder, suicide, and Satanism all the while never losing its coherency.

With a 1980’s release date, it’s uncommon for me to take so long in seeing a production. Slime City arrived on the cusp of Troma madness and campy style horror films.

Mary Huner plays an unheard-of duel role as both the antagonist and protagonist to Alex. Her character Lori, is sweet, pure and the kind of girl that takes her time with life. On the other hand, Nicole is bizarre, promiscuous, Gothy and pretty much takes on life day by day. She becomes the object of Alex’s fascination when he is introduced to her as his new tenant. Her sexy way of dressing and showcasing makes her the perfect neighbor mistress….complete with her own weird decorated dungeon decor. It probably doesn’t help that Lori has procrastinated on moving in and has issue with sex and its relationship values.

Nicole is daughter to an alchemist who delved into black arts and weird concoctions. His legacy has left behind a cellar of delicious neon colored drinks and pudding. The kind that transforms a person into a slimy violent killing machine. When Alex meets Roman, he is given a sample which is more than Alex can resist. He calls it a Himalayan yogurt. This begins our slimy Dr. Jekyll, Mr’ Hyde session of liquid transformation turning Alex into a melting man of sorts.

Robert C. Sabin does a great performance that switches nicely between boy next door and madman at large. Mary Huner becomes our screen sex symbol oozing with that bad girl persona that every man seeks. A noted highlight is her apartment dance as she seduces the camera with her selection of sexy moves.

Despite the fact that the whole narrative is rather scattered it still works for the most part. All in all it nicely falls into the late night movie scene in New York City in 42nd Street theatres from the late 1980s. Director Gregory Lamberson did a good job with the inadequate resources he more than likely had access to. The lead male actor, Roberty C. Sabin (also in “Naked Fear” from the same complication disc) is solid in his role. He does bring an element of sadness near the end as the unstoppable slime overtakes him. The Camera set-ups are good at times, though its compositional quality is still rather young in its presentation.

And inconsistency pops up in the location that throws slight questions at the viewer, but, don’t let that distract you from Mary Hunter’s character and the premise.

Special effects by J. Scott Coulterare are your typical 1980s “Fangoria” style SFX, and “classic and unforgettable”. In the making of documentary you can tell the SFX crew were enjoying themselves a lot on set. FYI, Coulterare has gone onto become a very talented special effects and make-up artist, with approx. 100 movies to his credit.

Similarities have been made to “Body Melt” from 1993, “Basket Case” from 1982 and “Street Trash” from 1987 in some ways, which is fine and understandable. In reality Roy Frumkes who made “Street Trash” was Greg’s media teacher while attending film school in NYC in the 1980s.

The film has gone on to be a underdog classic for its time. It’s look and feel are very reminiscent of the style of filmmaking in those days creating a future retro products for fans of old school to enjoy. Director Greg Lamberson has recently gone on to make a follow up sequel called “Slime City Massacre”. It’s follow up is of the times with some really culty feeling plotlines made for the modern horror fan. It’s great to see the production come full circle in what we hope can continue on in future years.