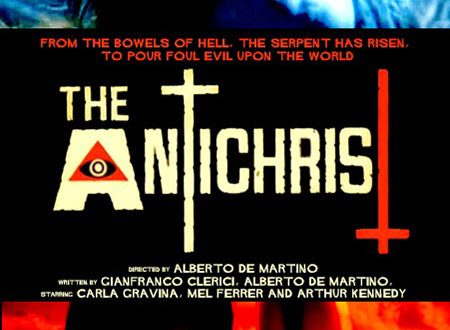 Ippolita is a young woman paralyzed by a childhood accident and confined to a wheelchair ever since. Struggling with a crisis of religious faith, she consults a psychiatrist who hypnotizes her as part of past life regression therapy. The treatment temporarily cures her paralysis, but also awakens a demon that has haunted the family for generations. The demon possesses Ippolita and her Catholic priest uncle declares that only an exorcism can save her soul.

It’s hard for contemporary audiences to truly grasp what a cultural phenomena 1973’s The Exorcist was. In that long ago, pre Internet age, studio film openings were limited to about twenty select metropolitan theatres across the nation. Studios then relied on newspapers and word of mouth to build up excitement in the outlying suburbs and rural communities where the film would eventually play. But The Exorcist became a cinematic juggernaut that swept across America, inspiring people to travel hundreds of miles and stand in line for hours just to be scared out of their minds. Suddenly, the rarely spoken of Catholic ritual of exorcism was plastered across the cover of Newsweek and Time magazines and became a staple of nightly television news. Church attendance temporarily shot through the roof as regular folks grappled with the concept of Satan being alive and well in modern America.

In the process The Exorcist generated enough money to make the Vatican envious; in fact, if you adjusted the film’s box office gross for inflation it would be just shy of a billion dollars. Those kind of numbers inspired low budget filmmakers to produce a glut of imitators including a blaxploitation version entitled Abby (1974), along with Magdalena, Possessed by the Devil (1974), Demon Witch Child (1975) and The Possession of Nurse Sherri (1978). But it was those crafty Italians who broke speed records by getting copycats like Beyond the Door and Enter The Devil (AKA The Eerie Midnight Horror Show) into American theatres by mid 1974 when The Exorcist was still playing.

There were a few gems among this legion of imitators, the most memorable being Alberto De Martino’s The Antichrist (1974). Despite being hired to mimic the Hollywood blockbuster, De Martino defiantly created a film that’s a hundred percent Italian in its style and imagery. From the opening scenes of frenzied Catholic pilgrims trying to touch a Madonna statue you know you’re not in Hollywood. Roman Catholic imagery is evoked throughout, including some stunning scenes in what appears to be the Vatican council chambers and others utilizing the ancient Catacombs of Rome. There’s also a gleefully blasphemous satanic orgy that only born and confirmed Catholics could have conspired to create.

Visually The Antichrist is on a par with any major studio picture, though, like many Italian films, it occasionally places visual style over coherent storytelling. The family mansion is particularly striking with its sculpted hallways and stylized interiors. The film’s lush cinematography is by none other than Aristide Massaccesi—better known to film buffs as Joe D’Amato. Before directing a staggering number of low budget horror and sexploitation films, Massaccesi/D’Amato was a respected and sought-after director of photography.

Despite The Antichrist being a deliberate knockoff, director Alberto De Martino never takes the easy road, particularly in his choice of a lead character. The Exorcist’s Regan MacNeil was an innocent young girl, who instantly inspired our sympathy, but The Antichrist’s Ippolita (Carla Gravina) is an embittered, wheelchair bound adult grappling with serious mental health issues before the demonic possession begins. Her paralysis is purely psychological—a condition she uses to manipulate her family, particularly her grief stricken father (Mel Ferrer). She also harbors incestuous feelings towards her brother (Remo Girone), though it’s never clarified if these feelings were ever acted upon. Ironically, her paralysis has left her doubting the existence of God, despite her own condition being non-existent. It takes a brave actress to make such a bitter character sympathetic; fortunately, Carla Gravina is equal to the task.

While American stars Mel Ferrer and Arthur Kennedy give credible performances the film belongs to Gravina who, despite spending much of her screen time in a wheelchair, brings a unique physicality to Ippolita’s demonic possession. Her disturbingly sexualized body language is totally incongruous to a handicapped character and therefore perfect. Her contorted facial expressions and leering eyes truly empower the demonic entity, particularly in the scene where she humiliates and debases an amateur exorcist.

Despite all these strengths The Antichrist is far from perfect. When the exorcism scenes begin its derivative nature becomes painfully obvious and some poorly executed optical effects don’t help these scenes at all. There are also some pacing problems around the midway point that might possess your fingers to inch towards the fast forward button. But remember—you’re watching an Italian knock-off movie, so you have to limit your expectations accordingly.

Overall, I would say The Antichrist is my second favorite example of an Italian “inspired by” film—the crown jewel being Fulci’s uniquely original Zombi 2. Number three on my list would be Enzo Castellari’s 1983 science fiction romp 2019: After the Fall of New York. The Antichrist is a satisfying and highly recommended viewing experience, particularly if you can find a quality DVD such as Anchor Bay’s release.

The Antichrist boasts some interesting folks in front and behind the camera. Lead actress Carla Gravina went on to win numerous awards including a best supporting actress award at the 1980 Cannes Film Festival for La Terrazza. She later moved into political activism eventually becoming a deputy for the Italian Communist Party.

Director Alberto De Martino directed over two dozen feature films including the shameless James Bond clone O.K. Connery (AKA Operation Kid Brother), which actually starred Sean Connery’s brother Neil as James Bond’s brother. One of his final films was the wonderfully dreadful The Pumaman, which the director called, “the only film I did wrong in my whole career.” The Pumaman barely earned back its budget at the box office, but eventually found a devoted following after being lampooned on Mystery Science Theatre 3000.

Adele Jokes About Her Weight Loss on ‘SNL’, Attributes it to COVID
Amber Rose Says Kanye West Bullied Her For 10 Years, Slut Shamed Her
Movie Marketers Will Pick Up The Audience In Pieces For Months To Come
Eric Prydz Drops Beloved Fan-Favorite Track “NOPUS” In Its Final Form [LISTEN]
Cinemark To Open Some Theaters In San Francisco, Santa Clara Without Concessions