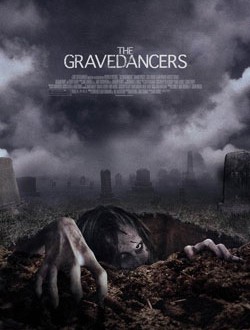 A heartfelt Irish wake for an old friend accidentally awakens three ghosts — a rapist, an ax murderer and a pint-sized pyromaniac — who wreak havoc on the drunken revelers who danced on their graves (Dominic Purcell, Josie Maran, Marcus Thomas and Clare Kramer). Tchéky Karyo and Megahn Perry co-star in this horrific tale of cause and effect from director Mike Mendez (The Convent).

QUICK FIX:
After the funeral of an old college buddy, three friends spend a drunken night in a cemetery laughing, singing, and dancing on graves. Unfortunately for them, they choose the graves on the wrong side of the tracks and wind up pissing off three very unforgiving spirits – a pyromaniac, an axe-murderer, and a rapist/torturer/murderer. Some people sure can pick ‘em. As our heroes race against time to outsmart the ghosts and attempt to rid themselves of the curse they’ve brought upon them, the hauntings get more and more brutal as the days and nights go by.

Will they join together to beat the ghosts at their own game before it’s too late? Will the ghosts claim everyone when all is said and done? Will Dominic Purcell smile? Will I make a blatant GHOSTBUSTERS reference to try and illicit a cheap laugh? No, not this time…sorry.

It’s been six very long years since Mike Mendez gave us a very fun little demonic nun flick called THE CONVENT that starred a shotgun-toting, leather-wearing, motorcycle-riding, demon ass-kicking Adrienne Barbeau. I loved that movie like I hadn’t loved a horror movie in a long time. It took me back to a time when laughs & over the top gore went hand in hand.

Mr. Mendez displayed a visual style that would be akin to taking an entire bottle of truck stop speed with a pot of stout coffee and washing it all down with a six pack of meth-laced Red Bull. It was his style in that movie that told me the man was indeed going places. So where has he been for so long? Fighting the Hollywood Remake Machine ™ to do everything in his power to ensure that THE GRAVEDANCERS got made HIS way, and not the way a room full of suits in Hollywood looking for the next PG-13 rated juvie-horror flick love story (*cough* TWILIGHT series *cough*) would want to make it. The pacing and style is more subdued this time around, building slowly, steadily towards an over the top battle royal that has to be seen to be believed.

The cast that was pulled together for this movie was nothing short of incredible, and made me believe that they were all friends/former friends with issues and conflicts. Dominic Purcell is a very talented, charismatic actor in the few things I’ve actually been fortunate enough to watch him in – his role as Drake taking on Wesley Snipes in BLADE: TRINITY was his breakthrough for me, although I also enjoyed his short-lived TV series JOHN DOE from a few years back, but as of yet haven’t gotten into PRISON BREAK.

Clare Kramer – WOW…beauty AND talent. Ever since her turn as Glory, the Big Bad in season 5 of BUFFY, I’ve made it a point to catch everything she does – not just because of my borderline insane crush on the woman, but because of her natural-looking talent and true beauty. Former model Josie Maran did a fine job as well. Tcheky Karyo gave us a low-rent Ghostbuster with comic charm and deadpan delivery, pretty much stealing every scene he was in. It doesn’t matter if he plays a good guy or a bad guy, large role or cameo; he owns whatever he’s in. I love this guy! Also look for the lovely Megahn Perry from THE CONVENT in a very funny supporting role as Karyo’s ghostbusting sidekick.

Director Mendez has a flair, style, and enthusiasm in his filmmaking that I haven’t seen very often since the 80s incarnation of Sam Raimi and early Peter Jackson horror flicks, and both of his directorial efforts – GRAVEDANCERS and THE CONVENT – are not only in my regular Halloween viewing rotation, but any other time throughout the year that I need a good blood-soaked pick-me-up. Please, Mike, I’m begging ya…don’t make it another six years until your next horror epic!!

Plain and simple, I loved this movie – great story, talented actors, effective scares and belly laughs, and the final 15 minutes truly have to be seen to be believed. I’m a sucker for a good ghost story, especially one that can freak the sh*t out of me, spill the blood appropriately, AND dance effortlessly with comedy – THE FRIGHTENERS comes to mind as a great example of that, and THE GRAVEDANCERS has most certainly done the ghost movie proud. Check this one out, add it to your collection, and always remember – respect the dead!!

15 Best Guilty Pleasure Dating Shows On Netflix and Hulu, Ranked
How To Choose The Right Haircut For Your Face Shape
Coping With COVID-19 Crisis: A Conversation With ‘Hadestown’ Director Rachel Chavkin
Will & Grace Sets a Date for Its Last Episode Ever (for Real This Time)
Animal Crossing Holidays Are Very Different In New Horizons