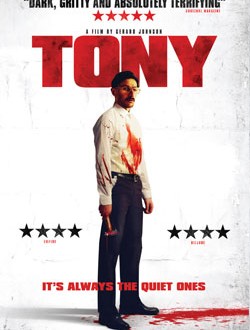 Solitary Tony (Peter Ferdinando) lives on the line of society and of sanity: Mostly he’s home alone, cultivating a taste for 1980s action flicks, and when social interaction arises, murder is his solution to an awkward moment. Director Gerard Johnson’s gruesome character study observes the inscrutable figure as he goes about the business of being maladjusted, misreading the world around him while remaining a mystery even perhaps to himself.

Wow! Gerald Johnson’s bleak character study film “Tony” really seems to hit its mark. It has an incredible performance by Peter Ferdinando as the title character, a screenplay that is filled with stark realism, and played out as a day in the life of a London serial killer. Make no mistake, this isn’t a slice and dice serial killer film but a realistic and gritty tale of an awkward man who seeks companionship but has a penchant for luring men back to his apartment for a bit of small talk and an end to their lives. Not since “Henry: Portrait of a Serial Killer” has a movie painted such a strong portrait of a man that is so fascinating and frightening. Tony (Peter Ferdinando) is an odd man. He lives alone in a crummy apartment, lives of state handouts, and never really held a job.

He spends most of his time watching old action films on VHS (ah, the good ole days) and walking the streets in a seedy area looking to meet someone. No one seems to pay him much attention and when they do, it is to harass him. He visits prostitutes who think he is weird, hangs out in gay bars, and snaps from time to time. When he snaps, he dismembers his victims and disposes of the pieces in the river. He keeps a corpse around to keep him company, talking to them as if they were alive. It’s amazing that such a clumsy, mild mannered man can continue to kill and not get caught.

This film is a perfect example how things should be done. The script focuses on this character, an odd little man with a murderous streak, and we are thrown into his life as he lives day to day. There is no back story, we never find out why or what drove him to be a serial killer, but we do see how he lives his life and how the killing fits in. We watch Tony try to fit in but nothing ever goes his way. He tries to find a job but is turned away, he visits a prostitute only to be thrown out. The only people that ever give him any time are the drug addicts and drunks that he takes in, only to feed his lust for murder. The film is short, tight, and incredibly fascinating.

This is truly one of the best portrayals of a serial killer in recent memory, haunting and unpredictable. Gerald Johnson should also be given a big chunk of the credit here. A talented filmmaker that took a risk at it really pays off.

The film is shot in much the same way as “Henry” where it almost feels documentary like, and at the same time paints a filthy portrait of the sleazy part of town. Everything just fit together perfect, story, acting, and editing. There should also be a special mention of the haunting soundtrack by legendary British group The The.

“Tony” is a film that should be seen by those who love a good character story. Films like this don’t always work when we are not given any backstory, we are just thrown into his life for a few days and are quickly torn out. Let this be a warning to those who would rather see an actual ending because this film does not have one. We are torn out of his life just as fast as we are thrown in and it works. I would have loved to have seen more, to see where this awkward man goes but what we do see is intense stuff. This movie isn’t about the murder but about the man. Gerald Johnson is a filmmaker with confidence and style and where he goes from here will be something to watch.

The performance by Peter Ferdinando was absolutely captivating, which will hopefully be a launching pad for an illustrious career. Don’t miss “Tony”, truly haunting.

Film Review: Nothing But The Blood (2020)
AT&T CEO John Stankey “Not Optimistic” On Theatrical; “I Can’t Tell You We Walked Away From The ‘Tenet’ Experience Saying It Was A Home Run”
Larissa Lima Working On Magic Show After Split From ’90 Day Fiance’
AMC Entertainment Sees 3Q Sales Plunge, Had $419M In Cash As Of Sept. 30; Plans To Sell More Stock To Raise Cash
Antonio Brown Deserves Another Chance In NFL, Says Vernon Davis