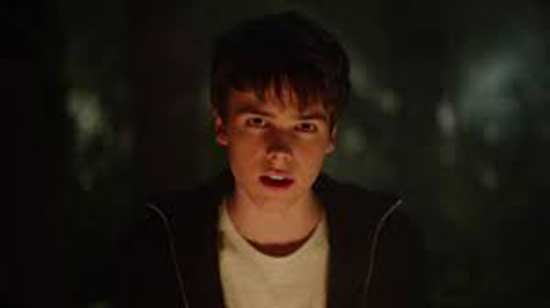 Hello Sam, thank you so much for taking the time to do this interview with Horrornews.net.

Sam- Thank you for having me, it’s a pleasure!

How did you get involved with Are You Afraid of the Dark and why did you decide to take the role of Gavin?

Sam- The whole audition process went by in a flash. I happened to be in LA filming an indie called Blindfire when my agent sent the info, so I got to audition in person for the first time in awhile, which was really nice. There were a couple of callbacks, then a chemistry read in Vancouver, and a couple days later I was at a costume fitting. As for why I took it… I mean, this was technically an invitation to The Midnight Society. A supporting role in the reimagining of a universally beloved series isn’t an opportunity you get every day. I’d have been crazy not to go for it. I’m still grateful for the part I got to play in bringing this show to life again.

The cast does a great job. What was it like working with everyone?

Sam- Thanks! It was a treat to work with that cast. Everyone was super committed, but we also had a ton of fun together both on and off screen.

I know some of us are still working from home and still in quarantine. Are you working on anything else, or do you have any other projects coming out?

Sam- I’m attached to a project that I’m pretty excited about, but that’s a while off and we can’t talk about it just yet. In the meantime, I’ve been doing my own thing. Quarantine has given me a chance to go back to writing, which is something I used to do all the time. It’s been an altogether positive experience for me.

Are You Afraid of The Dark was a big part of my childhood and it was always a great show. What did it mean to you to be a part of such a legendary show?

Sam- It meant a lot to me – I was excited, intimidated, honoured… a ton of things at once. It still doesn’t feel completely real.

What do you want to say to the people who will be watching Are You Afraid of The Dark?

Thank you so much Sam. You did a great job. Thank you and stay safe.