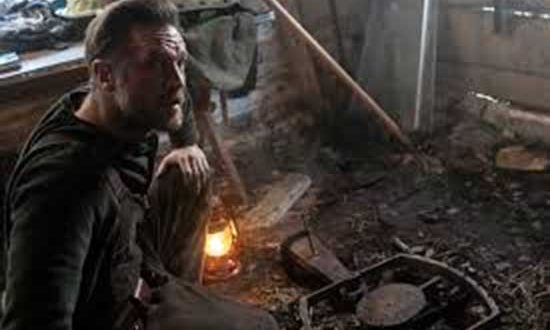 Hi Shawn, Hunter Hunter was a fascinating, creepy film. It was different. There was some psychological creepiness as well. How did this idea manifest for you?

S.L.-I appreciate that it had a positive effect on you. It came about through a number of different elements. One of the big things that had always gone through my head is my ambivalent attitude towards eating meat. I love animals and I love eating animals and those two things are not reconcilable within me. That problem that I had kind of strayed into, well what’s it like for a wild animal that has to survive in order to live.  Little questions that I’ve always had and influences from films that I’ve always loved and old Grimm’s fairytales.

That’s a fascinating aspect. The scenes in the woods are beautifully shot. What can you tell us about the wolf and the special effects?

S.L.-The special effects were Doug Morrow and Aaron Merke who really had a lot of experience with blood and guts. They had a lot of fun which made it a lot easier to work with especially with the time and money constraints that we had. As far as the wolf goes, that was a real wolf in a wildlife sanctuary. There was never any danger for the cast.

The wolf is incredible.

S.L.-Yes, that’s a real wolf. Her head was the size of my torso.

This cast did such a great job. Devon Sawa, Camille Sullivan, Nick Stahl, Gabriel Daniels, Summer H. Howell. These people seemed like they knew one another forever especially Summer, Camille and Devon. What was it like working with everyone?

S.L.- It was awesome. They gelled as a family unit right off the bat. They dedicated themselves to the roles. We were out in the middle of the wilderness and they came to a collective realization that unless they went all-in it was going to be a rough go. I tried to meet them as much as I could. Each one of those actors were interested in the psychology of things and making it seem like a real family. I’m glad that it comes through like that.

What are you working on next?

S.L.- I guess that will depend on how COVID-19 goes. I’d love to be shooting my next project by summer.

Hopefully things get better. I don’t want to give way spoilers but did you know that was going to be the final ending and how did you prepare for that?

S.L.- The whole movie facilitates that for the ending.

I thank you so much for taking the time to talk to me and Horrornews.net. You did a great job.

Days of Our Lives Round Table: Is It Over For Chad And Abigail?
Rosie O’Donnell Praying Trump Does Prison Time After Term Ends
NEW SONG ALERT! Arc Of Life “Just In Sight”
Bow Wow Says Houston Mayor Singling Him Out for Breaking COVID Rules
NCIS Review: Where’s Toby?