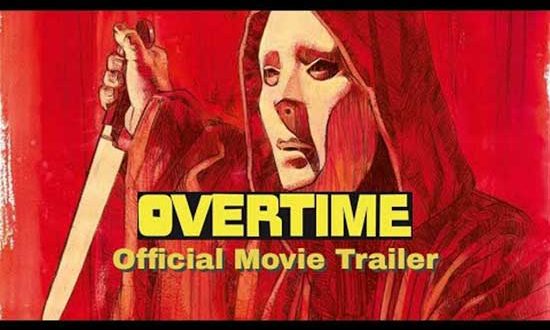 The trailer comes a few days before the beginning of a Kickstarter campaign, launching Tuesday September 29th, to raise funds for the production of the Blu Ray and its special features.

“The film itself is complete and ready for distribution. I hope that this trailer will get people excited enough to pre order a copy of the Blu Ray through this Kickstarter campaign, which in turn will fund some amazing special features.” – Mario Covone, Director of ‘OVERTIME’

The Kickstarter will also give fans the opportunity to buy the poster, painted by horror hall of famer Graham Humphreys, as well as the soundtrack album, featuring bands from around the world, including The Crimson Ghosts, Zombiesuckers, So Long Until The Séance and Devilsnite.

“This Kickstarter campaign is a dream for horror fans, who can pick up a new indie horror movie, discover new music from an international assortment of horror punk bands and grab a poster painted by a horror icon.” – Mario Covone, Director of ‘OVERTIME’

About the film – A teacher works late into the night at school, marking papers, seemingly alone. But a presence is watching him from the shadows. Stalked through the winding corridors and trapped within, a sinister secret holds the key to his survival.

No stranger to political subtext within his work, Covone’s debut movie, which he has also penned, explores the real-world issues of violence in schools, and the dangers of media scaremongering, whilst maintaining a traditional horror backdrop with twists and turns aplenty.

The creative team – The cast and creative team are all newcomers to the industry, and Covone is using this platform to expose new and raw talent to the world of horror cinema.

The movie poster has been painted by horror industry legend Graham Humphreys. Graham is responsible for some of the most iconic images in horror, including the movie posters for Evil Dead 1&2, the first five Nightmare on Elm Street films, Return of the Living Dead, From Dusk Till Dawn and also painted the covers for Covone’s Video Nasty comic book run.

Social Media –You can follow Covone and the production at: