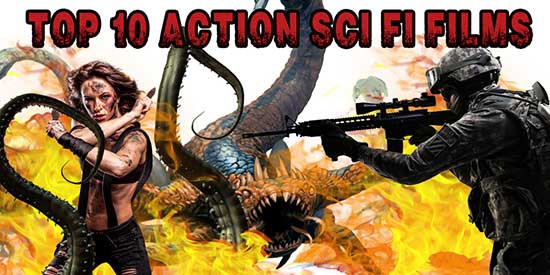 My novel Scorpius Rex is an homage to all those spectacular films that successfully combined classic science fiction concepts with slam bang action adventure. Being a genre aficionado, I wanted to share a list of my favorites. These are NOT presented in order of merit. Trust me, you’re guaranteed a great evening with any of these adrenaline-fueled classics.

PREDATOR (1987) — Before Die Hard, director John McTernan gave us this tropical science fiction thrill ride, inspired by the classic story The Most Dangerous Game. An alien trophy hunter comes to Earth on safari. But this ET never bargained on a close encounter with Dutch Schafer (Arnold Schwarzenegger). Co-stars Carl Weathers and Jesse Ventura add to the thrills, kills and upper body mass. Alan Silvestri’s musical score is so exciting it could make watching grass grow suspenseful.

ESCAPE FROM NEW YORK (1981) — John Carpenter’s plotline is so simple and elegant that it can be summed up in three sentences—New York has been turned into a maximum-security prison. The president’s plane crashes inside. America’s most wanted criminal is forced to rescue him. That basic plot provided the thread stitching together a quilt of Carpenter’s favorite movie nuggets from Howard Hawks westerns to Kurosawa samurai films and everything in between. The result was a completely original pulp fiction thrill ride. Carpenter discovered his perfect leading man in Kurt Russel AND composed what I consider his second-best musical score; the best being Halloween. Fun fact—some of the film’s special effects were created by a pre-Terminator James Cameron.

INDEPENDENCE DAY (1996) — Try to overlook the stock characters and coincidence-heavy script and just enjoy the ride. Roland Emmerich’s love of alien invasion movies shines in every frame of this contemporary update. Aerial battles, slimy aliens, mass destruction and a charismatic, breakout performance from a post Fresh Prince of Bel Air Will Smith make this one essential viewing. Amazingly the special effects in this classic 1990s beer and pizza film still hold up.

MAX MAX 2: THE ROAD WARRIOR (1981) — The original Mad Max was a box office smash in every country except the USA. Seeking to overcome that problem director George Miller pulled out all the stops for the sequel. The desolate scenery, unbelievable car stunts, iconic characters and then contemporary punk rock fashions all meld into a perfect comic book movie. Some might argue that the original Mad Max created the template or that Mad Max, Fury Road is a better film. But Road Warrior is the one that really popped the clutch and burnt rubber. There’s no CGI or miniatures in this baby—just death-defying car stunts. Best part … nobody died performing those stunts so it’s guilt-free enjoyment.

FLASH GORDON (1936) — Technically this is a movie serial, but it’s my list and this one needs to be on it. This first adaptation of Alex Raymond’s fantasy comic strip wisely stayed faithful to its source material. Flash Gordon, Dale Arden and Dr. Zarkov set off for the planet Mongo on a mission to stop Ming the Merciless from destroying Earth. From the opening title crawl (emulated by Star Wars) to the final chapter Flash Gordon delivers non-stop chases, narrow escapes, monsters and, like any movie serial, fist fights … so many fist fights! While most movie serials looked a bit threadbare, Flash took advantage of Universal’s amazing standing sets, props and music library, recycling elements from The Bride of Frankenstein, The Mummy and other classics. To sum it up, Flash Gordon paved the way for every pop culture science fiction film that followed—without it there would be no Star Wars. Want more proof of that? Search for Alex Raymond’s beautiful Flash Gordon comic strip art—he literally created the world of science fiction adventure.

THE TERMINATOR (1984)—All hail cinema’s most seamless fusion of science fiction and action adventure! This was director James Cameron’s sophomore effort, following the horrendous Piranha 2: The Spawning (1981), and his quantum leap from apprentice to master is staggering. Cameron’s snare-drum-taut script provides the perfect blend of high-tech robots, balls-out action and genuinely touching romance. But Arnold Schwarzenegger is the olive in this perfect celluloid martini. His charisma and creative instincts transformed the film’s emotionless robot into a pop cultural icon. Terminator 2: Judgement Day is, in many ways, a superior film, but this is the one that just blew me away.

DEATH RACE 2000 (1975) — This was producer Roger Corman’s frugal answer to the big-budget spectacle Rollerball. Admittedly the film’s futuristic cars look cheesy and the production values are … spartan. But Charles B. Griffith’s (Little Shop of Horrors, 1960) screenplay is a razor-sharp satire of bloodlust, greed, big government and celebrity culture. In the far-flung future year 2000, racers compete in the transcontinental road race, racking up points for mowing down pedestrians. In case you’re curious, men are 20 points, women 40, toddlers 70 and senior citizens 100. Director Paul Bartel strikes a perfect balance between comedy and action while squeezing every penny out of a limited budget. A remake, simply entitled Death Race (2008), cut all the original’s black humor, resulting in a loud, forgettable junk heap. God bless the 1970s when you could actually make something this twisted!

ALIENS (1986) — Here’s my personal favorite action/science fiction combo and a strong influence on Scorpius Rex. While the original Alien (1979) is an undisputed classic, it’s more of a haunted house movie set in outer space. Aliens, on the other hand, is a no-holds-barred action adventure. Ellen Ripley reluctantly returns to the xenomorph-infested planet LV-248, accompanied by a squad of heavily armed colonial marines. What could go wrong? Well, everything! Once again James Cameron writes a pitch-perfect script, packed with action, terror, camaraderie, romance and redemption. His taut direction is bolstered by flawless miniature effects from Bob and Dennis Skotak and a rousing musical score from the late James Horner.

And here are two that you may have missed!

THE HIDDEN (1987) — This sadly overlooked film tells the tale of a body-swapping alien thrill killer who’s come to Earth for fast cars, sex and money. In lesser hands it would just be an excuse for a barrage of car crashes and shootouts, but director Jack Sholder (By Dawn’s Early Light) injects an element of humanity that elevates it. Kyle MacLachlan is perfect as the alien lawman dedicated to tracking down the killer. I’ve always assumed MacLachlan was actually an alien anyway. The Hidden delivers a one, two punch with a talented cast and great action scenes.

AKIRA (1989) — ‘Neo Tokyo is about to explode,’ in this groundbreaking Japanese animated feature. A futuristic postwar Tokyo is under strict military rule, but their authority is being challenged by gangs of motorcycle riding cyber punks. One of these gang members, Tetsuo, develops psychic powers—a skill that makes him a pawn in a cultural war between the military and the resistance. Akira is exciting, thought-provoking, and visually stunning. A classic piece of early anime and a rousing action film.

Scorpius Rex is available on Amazon, Barnes and Noble, Goodreads … pretty much everywhere. You can own it with a mere click of a button. Go ahead, I’ll wait. That’s it for now, or, as Hudson said in Aliens, “Game over, man!”