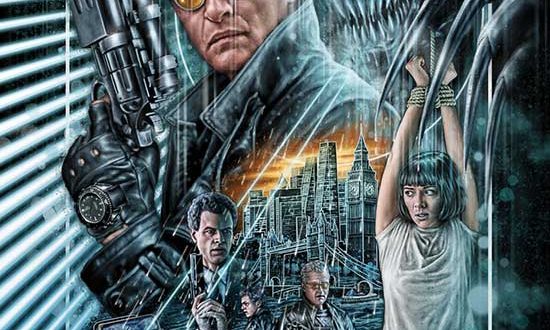 Synopsis: In the year 2008, the cops are better armed than before, but nothing has prepared them for this. Swift, sharp-clawed and deadly, something moves among them on the streets, in the alleyways, on the rooftops, tearing out human hearts and devouring them. Maverick cop “Harley” Stone (Rutger Hauer) lost his partner to the beast, and now it looks like his girlfriend Michelle (Kim Cattrall) is next on the killer’s list. Even in the future, there aren’t guns big enough to stop the creature’s deadly force, but Stone has no choice. Teamed with rookie detective Durkin (Alastair Duncan), Stone must stalk the edge of his own sanity if he is to destroy the rampaging Evil on the outside and banish the very real demons within . . . It could all be over in a SPLIT SECOND.

MVD Rewind Collection has teamed up with 101 Films to bring collectors a fully loaded special edition. Starting with a brand new high definition presentation overseen by Joe Rubin, the main feature is presented in its original 1.85:1 aspect ratio, newly scanned, restored and color graded in 4K from the 35MM internegative, with uncompressed 2-channel stereo audio.

“Split Second” is packed with hours of bonus material produced by 101 Films exclusively for the US (and the UK) including brand new cast and crew interviews, new audio commentary, and rarely seen 1992 legacy features, an alternative cut of the film, deleted scenes, promos and more!

Exclusive for North America, the MVD Rewind Collection Collector’s edition of SPLIT SECOND features newly commissioned artwork by The Dude Designs on both the wrap and a limited edition slipcover. Also exclusive for MVD’s North American release will be reversible wrap featuring a stylized version of the original VHS artwork that will also be featured on a mini-poster insert.

Eric D. Wilkinson oversaw this project on behalf of MVD. “Collectors have been waiting for this release for a long time. While MVD licensed this film almost two years ago, as a fellow collector, it was important to me to get this release right. At the time of the acquisition, MVD was originally provided with an older HD master, but I felt we could do better. With the help of Joe Rubin, we began a search for the best materials to scan. Once we had a beautiful new master I then reached out to 101 Films, who control the rights to Split Second in the UK, and we worked together creating new bonus materials and locating classic material in order to make this truly the definitive release of ‘Split Second” in both North America and the UK. I want to thank the 101 Films team for all of their hard work and thank the fans for their continued support of our collectors’ label. I promise it was worth the wait!”

*ACADEMY AWARD® IS THE REGISTERED TRADEMARK AND SERVICE MARK OF THE ACADEMY OF MOTION PICTURE ARTS AND SCIENCES.

MVD Entertainment Group is a full service music and movie distribution firm, exclusively representing thousands of audio and visual products for DVD, Blu-ray, CD, vinyl, and digital rights, worldwide. MVD also exclusively distributes a growing line of merchandise including limited edition collectibles, tee shirts, and more. The company stays on the cutting edge of new media with a huge catalog of audio and visual digital rights, and by nurturing its direct relationships with the major digital and VOD platforms.

What to Watch on Netflix Top 10 Rankings on November 19
The Rise of the Congressional Consignment Shoppers
‘Monster Hunter’ Now Going Up Against ‘Wonder Woman 1984’ On Christmas Day – Update
Big Sky Season 1 Episode 1 Review: Welcome to Montana
Sorry to Crush Your Dreams, But Rihanna is Not Starring in the Black Panther Sequel