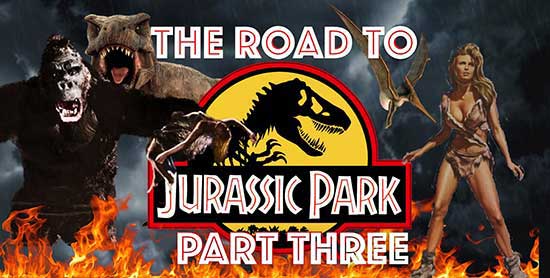 Welcome back for Part 2 of The Road to Jurassic Park. This time we’re covering the second golden age of dinosaur cinema.

There’s an old Hollywood adage—make a movie for the kids, but always throw in something for Dad. That pretty much sums up this 1966 remake of 1940’s ode to animal cruelty.

Special effects master Ray Harryhausen had begun as Willis O’Brien’s apprentice on Mighty Joe Young (1949). He’d learned well, going on to a solo career with hits like Beast From 20,000 Fathoms (1953) and The Seventh Voyage of Sinbad (1958). His previous and most ambitious work was Jason and the Argonauts (1963), helmed by British television director Don Chaffey. The movie’s popularity inspired Hammer Films to snag that winning team for their remake of 1940’s One Million Years B.C. But this time they intended to do things right.

OMYBC represented a huge shift from Hammer’s gothic horror, particularly in the wardrobe department. Gone were the flowing dresses and low-cut nightgowns, replaced by … more or less nothing. The prehistoric setting represented a perfect opportunity for Hammer to drape dozens of beautiful women in strategic bits of animal hide. That was the part for grateful dads across the globe.

For the younger folks, or at least the young at heart, there was an amazing parade of Harryhausen-created dinosaurs. Up until Jurassic Park came along, these were some of the best saurians to grace the screen. The allosaurus attack is the film’s standout moment, with the pterodactyls running a close second. There’s a triceratops fighting a T-Rex, an apatosaurus… Oh hell, all your favorites are there, along with an incredibly non-threatening giant sea turtle. Despite a limited budget, Harryhausen’s animation and optical work are superb, almost standing the test of time.

The barren yet beautiful Canary Islands locations gave the film a unique look, complimented by Willkie Cooper’s (Jason and the Argonauts) excellent cinematography.

These factors alone would have made OMYBC a success, easily on par with the best of Hammer’s gothic films. But they had bigger ideas. At first, they wanted the original Bond Girl, Ursula Andress (Dr. No), for the lead cave girl. But when Andress declined, they cast a virtually unknown Raquel Welch as “The Fair One.” The rest was movie history.

From their preliminary artwork it’s clear Hammer had always intended on using sex to sell the film. But when the on-set still photographer snapped a now iconic image, it instantly became the centerpiece of the poster and one of history’s most famous cheesecake shots. For the next decade Welch’s fur-bikini-clad image was everywhere. That photo, and the publicity it garnered, turned OMYBC into a blockbuster, eclipsing all of Hammer’s previous releases.

Personally, I find supporting actress Martine Beswick to be the film’s standout beauty, but I’m also a fan of her other Hammer films like Dr. Jekyll and Sister Hyde.

In retrospect One Million Years B.C. is entertaining kitsch with remarkable special effects. It’s worth watching, though contemporary viewers may find themselves fast-forwarding to get to the dinosaurs and maybe that hair-pulling fight scene between Beswick and Welch.

But Hammer wasn’t done yet. A year later, they dusted off those fur bikinis and loincloths for Prehistoric Women. This time they left out the dinosaurs but added more Martine Beswick. Despite the bounty of Beswick, audiences still felt cheated, forcing Hammer to dig a little deeper into their wallets to bring back the dinosaurs for 1971’s When Dinosaurs Ruled the Earth. This time Harryhausen disciple Jim Danforth handled the stop motion animation, and his Oscar-nominated work is superb. Victoria Vetri stepped into Welch’s role. But despite being 1968’s Playmate of the year, she lacked Welch’s magnetism, so WDRTE only did okay business.

Vetri did go on to fame, of sorts, when she was convicted of shooting her boyfriend in 2010, claiming he was Charles Manson in disguise. It’s a strange story.

Hammer had déjà vu all over again with 1971’s dinosaur-free Creatures the World Forgot. By now the plot was getting as rank as those leftover loincloths and Creatures was relegated to the bottom half of drive in double bills.

Before we get to the big finale, I want to throw some sunshine on another Spielberg-produced dinosaur gem—this is the “half” in my “four and a half” count. In terms of box office profits and ongoing success this 1988 animated film was a genuine blockbuster that likely fueled some young viewers’ love of dinosaurs. Five years later, those slightly older kids helped make Jurassic Park a household word.

The Land Before Time is the tale of young orphaned dinosaurs making the pilgrimage to a safe haven during a famine. Director Don Bluth already had a reputation for edgy family films, particularly 1982’s darkly brilliant The Secret of NIMH, which probably traumatized a few kiddies.

Land isn’t nearly as edgy, but subjects like losing a loved one, famine and prejudice are touched on without much sugar-coating Despite being frightening, Land’s sinister T-Rex, Sharp Tooth, isn’t depicted as evil; he just needs to eat.

Land’s director’s cut was darker in tone, until Spielberg forced Bluth to trim several minutes. But what remains still addresses its subject matter maturely. James Horner’s score adds even more tension to our young dinosaurs’ odyssey. It’s one of those film’s children will enjoy, but you might need to have a chat afterwards about some of its darker elements.

The Land Before Time’s success inspired no less than thirteen (!!) sequels and a television series, all done without Bluth’s creative input. All these follow-ups were musicals sent direct to video where they sold like gangbusters. These sequels, along with producing the Transformers series, are why Stephen Spielberg can afford to buy a private island without even dipping into his Jurassic Park royalties.

And, once again, if you’ve never seen Bluth’s The Secret of NIMH you’re really missing out.

This is it, the modern-day King Kong that blew audiences away while devouring the box office. Much of its success is due to the same factors that elevated Kong. It’s no secret that Spielberg adored Kong and was savvy enough to recognize the elements that made it great—namely an intelligent script, charismatic characters, rousing music and, finally, groundbreaking special effects. As a consummate filmmaker he not only understood those ingredients but found the perfect blend and tempo to weave them together.

It’s a testament to his work that we’re willing to suspend disbelief while ignoring that the science is hogwash, the dinosaurs are from a mixed bag of eras, the park’s security is a joke, and that Hammond pretty much creates all his own problems by being a cheap boss and the world’s most negligent grandparent. But hey, you can shoot holes in Die Hard, Star Wars, The Terminator and Jaws, yet all those films deliver their stories to perfection.

There are hundreds of articles about the special effects wizardry behind Jurassic Park, so we can skip all that. Suffice to say that, for all the raving about CGI, there are only four minutes of it in the entire film. The rest was done with a combination of impeccably shot giant-sized robotics and puppetry. Jurassic Park and Aliens (1986) are both examples of traditional special effects shot for the editing room and cut together seamlessly—and that’s why both of these films age like fine wine.

Having gone full circle from The Lost World, let’s explore the cultural differences between Jurassic Park and its cinematic grandfather King Kong. The contrasts between these films perfectly illustrate the eras in which they were made. Back in the 1930s, the world was still full of mysterious places waiting to be explored by bold, often reckless men. It was plausible that a ship could take you to a fog-shrouded island full of dinosaurs. But decades later, the Earth has been mapped and her secrets revealed. In our modern world, it’s science that invades a remote island to create prehistoric beasts.

Spielberg clearly gets that, spinning all the classic man against nature tropes into a thoroughly modern tale. Now a brainy paleontologist can be as courageous as a rough and tumble 1930s sailor. Jurassic Park’s Dr. Alan Grant was actually inspired by paleontologist Jack Horner, while Kong’s hero, Jack Driscoll, was based on boxer Jack Dempsey—even their names are similar.

In Spielberg’s vision a mathematician can even step up to the plate when the chips are down. Today, the macho big game hunter of yore is easily outwitted by the velociraptors. It falls to the heroine, Dr. Ellie Sattler, to get the park’s power back on, with little help from that virile game warden who’s ironically killed by that “clever girl.” Even the dinosaurs are no longer portrayed as monsters but rather mistreated animals lashing out at their captors.

But some things haven’t changed. King Kong revolved around Carl Denham, a showman who discovered “The Eighth Wonder of the World,” only to put it in a cage to enthrall the masses. Yet Jurassic Park’s John Hammond is no better, a wealthy impresario who recreated majestic creatures from another age only to lock them in a more gilded cage to be gawked at, the message being that, for all our progress, we’re still determined to assert our dominance over creation. Or, to quote Jurassic Park, “The lack of humility before nature being displayed here staggers me.”

Although we’ve come far culturally, there’s still a long road ahead. I think Jurassic Park and King Kong each illustrate that in a uniquely poetic way.

Jurassic Park spawned several sequels, all of which are big-budget, splashy entertainment—fun to watch but easily forgotten. They all falter because, like actual clones, with each generation the bloodline gets weaker.

I want to thank artist Daryl Joyce for allowing me to use his great interpretation of the poster for One Million Years BC. You can find more of his work on deviantart.com under the call sign Harnois75.

AND if you’re in the mood for some quality prehistoric monsters on the loose, check out my new novel SCORPIUS REX, from Severed Press, publishers of the finest kaiju fiction. It’s available in paperback and eBook from Amazon and Barnes and Noble.

See Part 1 to the Road to Jurassic Park

See Part 2 to the Road to Jurassic Park