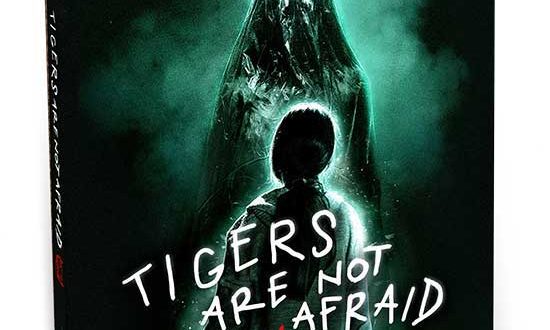 TIGERS ARE NOT AFRAID

Available on DVD and DVD/Blu-ray SteelBook on May 5, 2020

“A fairytale for today. Beautiful, shocking and chilling.” – Neil Gaiman

“This is one terrific film…two minutes in, I was under its spell.” – Stephen King

RLJE Films, a business unit of AMC Networks, has picked up select rights to Shudder’s, AMC Networks’ streaming service for horror, thriller and the supernatural, TIGERS ARE NOT AFRAID which releases on May 5, 2020 on DVD and DVD/Blu-ray SteelBook. Written and directed by Issa López (Secondary Effects), the horror/thriller stars Paola Lara (La Siberia), Juan Ramón López, Ianis Guerrero (“Club de Cuervos”), Rodrigo Cortes, Hanssel Casillas (“Sitiados: Mexico”), Nery Arredondo (“Como Dice El Dicho”) and Tenoch Huerta (Get the Gringo) as “Chino.” RLJE Films will release TIGERS ARE NOT AFRAID on DVD for an SRP of $27.97 and on DVD/Blu-ray SteelBook for an SRP of $34.97.

TIGERS ARE NOT AFRAID is a haunting horror fairytale set against the backdrop of Mexico’s devastating drug wars; TIGERS ARE NOT AFRAID follows a group of orphaned children who are unexpectedly given three magical wishes. As they run from the cartel that murdered their parents and the ghosts that haunt them, they must decide how to use this special gift to save their own lives and the people they love. Acclaimed by critics and filmmakers alike, Guillermo del Toro has called TIGERS ARE NOT AFRAID, “an unsparing blend of fantasy and brutality, innocence and evil.”

These releases contain extensive bonus features including a 43-minute behind-the-scenes look at the making of the film with director Issa López, a director’s commentary, never-before-seen casting sessions and deleted scenes, as well as multiple photo galleries. The DVD/Blu-ray SteelBook has an additional bonus feature of a 63-minute interview with Issa López and Academy Award-winning filmmaker Guillermo del Toro following the 2019 Toronto International Film Festival screening of the film.

TIGERS ARE NOT AFRAID DVD includes the following bonus features: