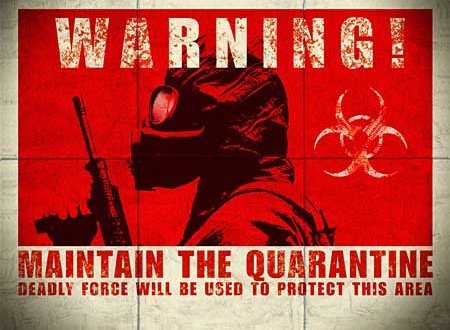 Especially since the creative genius of zombie master George A Romero, the popularity of post-apocalyptic horror films has exacerbated intensely and has spawned its own cult fan base, with films ranging from zombies, chemical explosions and simply the end of the world as we know it. Whether you’re a fan of zombie flicks, natural disaster films or simply barbaric anarchist fantasy films, you’ll undoubtedly have a favourite apocalyptic horror film.

Perhaps what is so appealing about the genre is that it allows for horror to be made into a hybrid with science fiction, action, drama, etc. With films such as I Am Legend and Zombieland, there have been perfect opportunities to mix horror with drama and comedy, which not only freshens the selection of films, but brings in a broader audience. Who doesn’t like laughing at a horror film every now and then or having a realistic portrayal of pain and anguish in a desolate wasteland?

The first film on the list is the quintessential British zombie film, starring Cillian Murphy and Naomie Harris, and is set predominantly in a post-apocalyptic London. A rage virus has been let loose around the nation after animal activists attempted to free infected primates and the virus soon takes host of most of the population. Protagonist Jim wakes to an empty London and along with his newfound friend Selena fights for survival in virus-ridden England. A very intense zombie film and one of the finest ever made.

What would an apocalyptic horror film list be without this comedy horror gem? It’s pretty much guaranteed that you’ve at least heard of Zombieland, if not seen it. For those who haven’t, Zombieland intertwines the stories of 4 survivors of a zombie apocalypse; Columbus, a geek, Tallahassee, a redneck, Wichita, a sassy scammer, and Little Rock, Wichita’s devious younger sister. Hilarity ensues with a cameo from “BILL F’N MURRAY!” and Zombieland provides a lighter view of the apocalypse. With Zombieland 2 on its way in the distant future, this film cannot be recommended highly enough.

It is extremely unlikely that many of you reading this will have ever heard of Threads due to its very cult status, but it is an excellent example of an apocalyptic horror. Threads follows the story of residents of Sheffield, Yorkshire (England), who are struck by a NATO nuclear bomb and the devastating results of nuclear fallout. Threads is very clever in that it is a horror film without using typical horror methods and will leave a chill down your spine whilst watching it.

What would a horror film list be without the legend himself, Vincent Price? A plague has swept humanity, turning all of humanity into the living dead, and a reluctant Vincent Price is forced into becoming a vampire hunter after realising that he is the last man on earth, which is not an easy job to keep. Classic horror fans will rejoice whilst watching this classic, which turned 53 this year, and has aged with grace and greatness. If you would like somewhere to start with apocalyptic horrors, The Last Man On Earth is the place to begin!

It would be a criminal act to not include a George A Romero zombie film on this list, especially considering he fathered the zombie apocalypse genre for so long. Following an ever-growing epidemic of zombies that have risen from the dead, two Philadelphia S.W.A.T. team members, a traffic reporter, and his television executive girlfriend seek refuge in a secluded shopping mall. Of course, zombies make their ways into the mall and wreak havoc, especially with the addition of deviant bikers who break into the mall. Dawn Of The Dead is THE zombie film to see, even if you’re not a zombie fan, and has dated amazingly. George A Romero set the standard for all future horror films with his Undead Trilogy and shall remain in horror history as an icon and a God. R.I.P. George A Romero.

Before watching World War Z, most people were scratching their heads, wondering to themselves what an actor such as Brad Pitt was doing in an apocalyptic horror film. After watching World War Z, you’ll know exactly why. World War Z follows the story of Gerry Lane, an ex-employee of the United Nations, who is travelling the world in a frantic rage against time in order to halt the zombie pandemic that’s laying waste to worldwide armies and governments, threatening human life itself. You’ve not seen the end of the world quite like this portrayal before, that’s for sure.

After watching the films in this series, it’s not hard to understand why it is so popular. Based loosely on the classic shooter series of the same name (made by Capcom), the Resident Evil series portrays the darker side of the apocalypse with a host of monsters that would frighten even Satan. Spanning over 6 mighty installments to the big screen franchise, it remains one of the most, if not the most, popular apocalypse series of all time, and for good reason. Milla Jovovich has become an icon in the genre as a result of her badass portrayal of Alice, the main protagonist of the series. Notably, Slipknot had a worldwide hit with their song ‘My Plague’, which featured on the original installment of the franchise.

When asked to provide an example of a heartbreaking version of the end of the world, I Am Legend will be atop any list. Will Smith’s famous role as Robert Neville, along with his trusty companion, a German Shepherd by the name of Sam, is a truly powerful force to witness, which will bring tears about even from the most hardened individuals. Set in New York post-apocalypse, I Am Legend follows Robert in his quest to find a cure for a plague that has eviscerated most of humanity. The relationship between man and man’s best friend is truly emphasised here, unflinchingly showing the power of animals. Not a film for those wanting a light-hearted approach to the apocalypse. I Am Legend celebrates its 10th birthday this year.

If you like tension and suspense in your horror thrillers, The Crazies is the film for you. Set in Iowa, a small town’s inhabitants spontaneously are plagues with madness and insanity, followed by death, after a contamination of the water supply by a strange toxin. Sheriff David Dutton (Timothy Olyphant) tries to survive with his wife and 2 other untouched citizens in a world that has turned upside down. Your heart will be pounding throughout the entire 101 minutes of The Crazies, as you root for David and his wife in their bid for survival.

Have you ever wondered what treasures lie within time capsules, waiting to be unearthed? Nicolas Cage is perplexed to see what has been unearthed in a time capsule by his son’s class. A piece of paper containing seemingly random numbers is given to Cage’s son, which strikes an interest in the mind of the teacher. As he begins to explore what the numbers mean, strange disasters begin to unfold around him, which he soon realises have something to do with the numbers on the piece of paper. What do the numbers mean? Have the numbers really predicted a horrific apocalypse? Who are the strange people who keep appearing to Cage’s son? Knowing is an excellently clever film and not your run-of-the-mill apocalyptic drama with a shocking conclusion.

With the increasing popularity of apocalyptic horrors, it is hard not to enjoy at least a few of the offerings available. It is even harder to not be at least be curious as to what you would do in the event of an apocalypse. Would you flee, fight, make the most of it? Expect many more films of this type to be released in the next few years and be sure to watch them. You’ll be pleasantly rewarded. Could there be a budding new George A Romero out there somewhere? You decide!