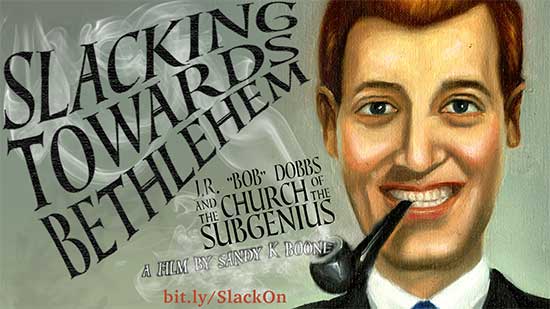 J.R ”BOB” DOBBS & THE CHURCH OF THE SUBGENIUS
In virtual theaters October 16
on demand October 20

What started out as an inside joke amongst two self-proclaimed weirdos in Ft. Worth, Texas soon becomes much more than they bargained for when they decide to turn their conservative southern ideology on its head and invent a new religion all their own in J.R. “Bob” Dobbs and the Church of the SubGenius – in virtual theaters and on demand this October.

>From Dark Star Pictures and Uncork’d Entertainment comes the story of a church that’s called “the most aggressively preposterous theology the world has ever known!” But what is the Church? Filmmaker Sandy K. Boone explores the underground movement that has galvanized the imaginative, the artistic, the nerdy, even the deranged – to examine the simmering dystopia in their culture, and do absolutely nothing about it – except, maybe, poke fun at it all.

J.R. “Bob” Dobbs and the Church of the SubGenius will be in virtual theaters October 16 and available on Demand October 20.