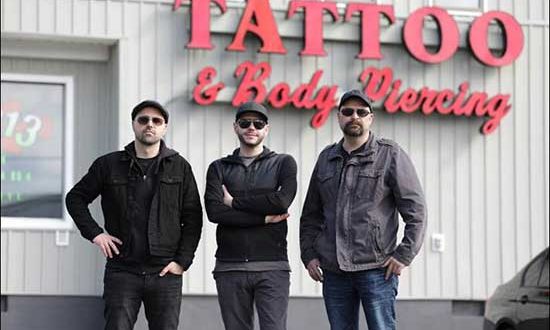 Plus, the Grand Finale of ‘Paranormal Caught on Camera: Top 100’

Jason Hawes, Steve Gonsalves and Dave Tango are back for more adventures to the other side in a new season of “Ghost Nation.” This season’s locations have bigger mysteries, are more chilling and have never been investigated on television. And this time, they are calling in an old friend for some help – paranormal investigator Shari DeBenedetti. On all investigations, collecting evidence is just the beginning. With the help of their local contacts, they’re going to embed themselves in the community, conducting multi-day investigations in an effort to track down the true source of these hauntings and restore peace to the living. Under the United Paranormal Research Organization (UPRO) banner, local paranormal groups will join the team as they employ new devices and techniques for confronting and questioning spirits. They’ll do whatever it takes to entice the ghost into telling its story and stop at nothing to get to the bottom of the paranormal phenomena. [Hour-long episodes]

Jason Hawes, Steve Gonsalves, Dave Tango and Shari DeBenedetti investigate the paranormal events plaguing the Zone13 Tattoo and Body Piercing shop in New Jersey. They head to the town of Deptford to investigate the tattoo shop where disturbing apparitions, disembodied voices and even physical encounters are threatening the business. After their own investigation, it seems that whatever noises the team are hearing are following them as they move. With all these strange happenings and fresh evidence, the UPRO team will determine if the shop is actually haunted by one of the property’s former owners, a woman named Bertha.

Jason Hawes, Steve Gonsalves, Dave Tango and Shari DeBenedetti head to Millville, New Jersey, to help desperate factory owners deal with paranormal events tormenting them and their workers. The owners hope to repurpose a former glass factory and bring jobs to the community, but claims of noises, voices, apparitions and even physical altercations, have ground renovations to a halt. Just as the UPRO team is hot on the trail of what’s causing the activity, a medical emergency jeopardizes the entire investigation.

Buckle up for another fright-fueled season of “Destination Fear” – a haunted road trip turned terrifying sleepover. Brother and sister duo, Dakota Laden and Chelsea Laden, and best friend Tanner Wiseman, along with camera operator Alex Schroeder, confront their fears once again, as they pile into their RV and hit the road on a nail-biting cross-country journey to pursue paranormal evidence, spending the night inside America’s most haunted abandoned buildings. Lured by the unknown and with a greater understanding of fear, the crew explores a whole new set of abandoned locations with grim histories –  only this time the destinations remain a surprise, not just to Chelsea and Tanner, but to Dakota as well, as they each take turns picking a haunted hot spot, challenging each other in unique ways. [Hour-long episodes]

Dakota Laden leads his sister, Chelsea Laden, and friends, Tanner Wiseman and Alex Schroeder, to the Saratoga County Homestead Hospital in upstate New York, a decaying sanitarium where some patient corpses were unclaimed due to a flu pandemic. Screams and darting shadows play mind games with the team as they struggle to pin the activity on the living or the dead.

“Doomsday Caught on Camera” explores shocking weather events and natural disasters including volcanoes, earthquakes, hurricanes and tsunamis that have been filmed by individuals and uploaded online. These riveting stories are driven by first-person accounts of those who survived these life-changing events, with supporting expertise from our cast of commentators that includes renowned geologists, meteorologists, voices from a theological perspective along with healing/recovery specialists. The range of jaw-dropping footage will have you thanking your lucky stars that these doomsday

A team of veteran firefighters get trapped inside their truck during a raging wildfire. A mother tries to escape from an erupting volcano. One man fights to protect his family as a terrifying onslaught of mud and debris invades his home.

A kayaking trip turns deadly when an exploding glacier shoots out shards of ice at killer speeds. A father and daughter face their worst fears as a destructive tornado barrels through their home. A family is surrounded by furious flood waters.

Viewer-generated clips from around the globe reveal some of the most unnerving paranormal incidents ever to be captured on camera. A panel of experts analyze the shocking footage as they attempt to explain the impossible. [Hour-long episodes]

An abandoned theater in Nottingham, England, houses a museum of haunted artifacts. Recently, paranormal activity around a Victorian hearse has been caught on camera. Intrigued by the findings, M.J. Dickson investigates. More footage from around the globe is analyzed by our experts at the “Paranormal: Captured” headquarters.

Paranormal investigator Danny Moss investigates a haunted house in Middlesbrough, England. Rose grew up in the home, where she witnessed her first ghost at just 7 years old. Her husband, Kevin, was a non-believer when she first met him, but since staying at the house, he is a skeptic no longer. And in the “Paranormal: Captured” headquarters, footage and stories from around the world are analyzed by our experts.

Paranormal investigators Zak Bagans, Aaron Goodwin, Jay Wasley and Billy Tolley are opening up to viewers as they’ve never done before in Travel Channel’s new series, “Ghost Adventures: Screaming Room.” The guys are kicking back in their screening room to watch their favorite episodes of the hit series and get candid with fans – and each other – about their craziest experiences over the past decade. Away from the haunted locations we usually see them in, with no equipment or investigations, the crew will relive some of the most terrifying, shocking and even comedic moments from their career, as they rewatch their most memorable investigations with never-before-heard stories from the moments that created a legacy. Get ready for laughs, screams and surprises alongside the crew in the ultimate tell-all event. [Hour-long episodes]

Zak Bagans and the guys look back at their investigation of San Haven Sanatorium, a once sacred land infused with death, despair and a dark energy that overcomes all who step onto the property.

Zak Bagans and the guys revisit their investigation of Kay’s Hollow, a former monument plagued by malevolent ceremonies, spirits and otherworldly creatures.

Travel Channel’s hit series, “Paranormal Caught on Camera,” is counting down the top 100 paranormal encounters of all time. This eye-opening compilation features the most compelling evidence, expert analysis and eyewitness accounts ever documented including – Bigfoot, UFOs, aliens, poltergeists, ghosts and a whole lot more. Seeing is believing. [Two-hour episodes]

Bigfoot terrorizes three kids. An apparition stalks a cheerleader. A UFO is spotted off the coast of Turkey. A doll comes alive in a Nebraska museum. All that and more as the countdown continues for the top 100 paranormal encounters of all time.

An interdimensional cryptid is spotted deep in a forest. Ghostly passengers exit a plane. UFOs appear over Lake Superior. A seance goes horribly wrong. All that and more as the countdown of the top 100 paranormal encounters of all time draws to a close.

Is Elvis still alive? Has extraterrestrial life really visited Earth? Is it possible that some people see religious statues move or bear the crucifixion wounds of Jesus? Experts and eyewitnesses explore some of the most-extraordinary happenings in recent history that science can’t explain. [Hour-long episodes]

Experts debate whether spontaneous human combustion is a real medical phenomenon or an unlikely accident. They then investigate a mass sighting of UFOs in a quiet seaside town in 1977.

Experts investigate claims of paranormal activity at a Louisiana plantation and the death of rock ‘n’ roll superstar, Elvis Presley.

*All times are ET/PT

“Most Terrifying Places in America” – 8am-7pm

The CW Picks Up Additional Seasons of Coroner and Burden of Truth
Chrissy Teigen Describes Heartbreaking Moment She Said Goodbye to Son Jack
Wait, Could The MCU Be Tying Scarlet Witch Closer To The X-Men?
Maya Rudolph Turns the Final Trump-Biden Debate Into a Drinking Game in the SNL Cold Open
Nicole Kidman Delivers a Dreamy Musical Performance in New Series The Undoing