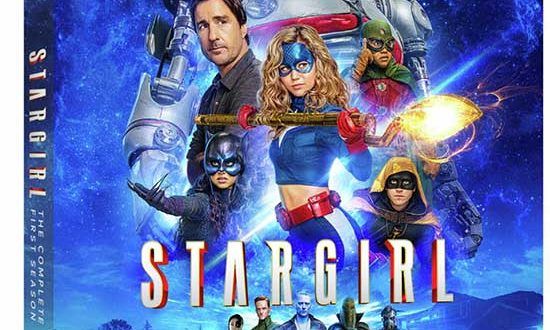 Teenager Courtney Whitmore joins the Justice Society of America. Based on the character from DC Comics.

As a fan of the CW super hero universe, I can honestly say that the CW network has created and produced some of the greatest super hero series for television even made. CW has brought us “Arrow”, The Flash”, “Black Lightning”,”Supergirl” “Batwoman”,, “Gotham” and the ensemble team “The Legends of Tomorrow”. In fact, I can also honestly say that I have a hard time keeping up with all the network’s releases. None-the-less, CW is a superhero production machine!

It was the recent trailer for a new series called “Stargirl” that really grabbed my attention. As a comic book fan myself, I’ve always loved the idea of a team of villains trying to take down the world. This is at the core of most hero stories in comic books and quite common. The central antagonists are taken on by the focal character who is usually awkwardly trying to take them all down at once (aka Spiderman!!). The hero in this case being a teenager with gymnastic skills (and a staff) that only goes so far before she has to rely on the strength of others. This leads us to the best of the super hero CW series, so far, “Stargirl”.

Stargirl, upon first episode, is chock full of top name actors and crazy-ass TV effects (often reminding me why I never watch Bill Bixby’s Hulk anymore). Yes, it’s true, we are way past “The Greatest American Hero” era, and here to stay with an onslaught of bad ass special effects taking the new lead. I was not only inspired, but impressed that I didn’t have to go to the local theater to see this one. Home viewing has definitely upped its game!

Star Girl is a classic tale of a hero who stumbles upon her legacy in waiting. Upon taking root in the town of Blue Valley, Nebraska, new girl Courtney Whitmore (Brec Bassinger) discovers an old relic on the basement, the power staff of Starman’s antigravity staff of immense power.

The staff is an instrument that only works for the subject it has chosen. Courtney forms a bond with this newly found object and begins to accept the destiny that lies ahead. To add to life’s difficulty, Courtney is the resident new girl who is having a hard time making friends at the local high school and adjusting to the teenage angst of past. This combined with learning of the town’s corruption and secrets appears to awaken the towns more seedier residents of past, namely the former members of the Injustice Society of America.

Her stepfather Pat is soon discovered to have his own historical legacy with the power staff, namely as the former sidekick of Starman. Starman is the now deceased super hero and leader of the Justice Society of America (JSA), a former super hero group intent on keeping justice within the world. We arrive on the demise of this group as they are taken out by the villains ISA.

Forward to present day a decade later, as the Whitmore’s have decided to move back to Barbara Whitmore’s (Amy smart) (Courtney’s mother’s) home town . The transition while smooth at start, begins to get complicated under the weight of its sorrid past. This begins the new adventures of Stargirl, who embraces this new power while also suspecting that Starman was her real father.

Courtney Whitmore / Stargirl equipped with her own set of gymnastic skills, finds herself suddenly plunged into a world she never new, the rivalry between the JSA and ISA.

The emergence of Starman’s former power staff brings out the bad guys who have sworn to end the JSA forever. First up in lineup in the nemesis Brainwave, a member of ISa who holds psionic abilities. He goes thru many phases during the show’s run, but stands to be among one of the most powerful of the ISA.

As you can guess, battles ensure as villains emerge within the small town of Blue Valley. Though intent on payback for her presumed father’s death, Stargirl is driven to not only battle against them, but enlist new members to resurrect the legacy of JSA.

The show grows in complexity as new characters are introduced while taking us further into the intent of ISA. At its center, “Stargirl” really is a heartfelt tale that plots the forces of evil vs good. The 13 episode run allows plenty of time for the show’s characters to evolve and develop. I was so engaged with the series that I binged the series within a coupe of days in anticipation of its outcomes.

It is a seriously fun TV series excelling in visuals and hero-to-villain confrontations. As Stargirl is born, so is the emergence of former JSA and ISA members. I for one was excited by every episode, that plays each new chapter like pages in a comic book. Heroes are resurrected while villains creep from the underground into a formidable new force revealing their range of powers along the way.

While I’ve followed quite a few CW series over the years, I’ve always wanted to see a super group take form over the usual single hero-to-villain format these shows usually fall into. The series emerges from the DC Universe under the creation of Johns and Lee Moder. Season one consists of 13 episodes adding an exciting new program to the growing DC group of TV realizations. The character of Stargirl was first introduced in the “Arrowverse” based on a parallel universe episode.

While the show’s characters appear to be somewhat of carbon copies of other super groups, it is worth noting that the JSA story itself actually originated out of the 1940’s. CW’s Stargirl is set within more modern times but is still somewhat retro in feel placing it closing to the end of the eighties timeline.

I for one was excited to see this series take form (while even being more excited about the level of professional production it was created under). Great acting, great action and great comic book fun, Stargirl is simply great TV. I’m a fan and look forward to many more seasons.

For newcomers who enjoy seeing the Avengers and other super groups, you won’t want to miss the chance to enjoy the this series on Bluray. It is a series spawned from the same bucket of hero TV programs we’ve come to enjoy from the wave of quality home entertainment. DC has stepped up their plate in so many ways. The introduction of the JSA and ISA is just another example of that.

‘No Time To Die’ Poised To Depart Easter Weekend For Fall Release
Your Favorite Twitter Comedian Probably Has Parade Underwear
One Jurassic World Actor Explains Why They Missed A Chance To Be In Dominion
BET’s ‘Let’s Stay Together’ Star Bert Belasco Died from Aortic Aneurysm
Bandcamp Expands Its Vinyl Pressing Service to Accommodate 10,000 Indie Artists