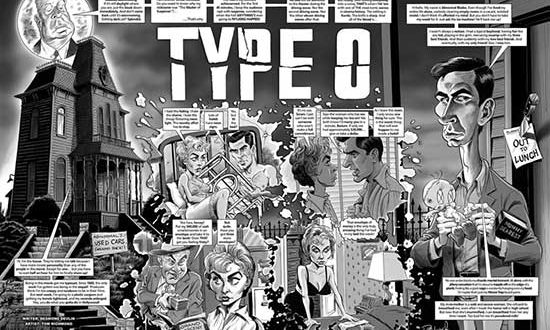 Many fans of horror and humor are familiar with MAD Magazine’s movie parodies. From “The Ecchorcist” to “The Calamityville Horror” to “Intravenous with the Vampire” to “The Bland Witch Project,” MAD readers were left shaking with laughter, or fear, or possibly early onset tremor disorders.

What’s really scary is that MAD has suffered heavy corporate cutbacks. It’s now a reprint magazine that no longer publishes the type of movie parodies it invented and made famous.

Longtime MAD Magazine creators Tom Richmond and Desmond Devlin are doing Claptrap, an all-new book of classic movie parodies. Each of the films was never parodied at the time, and there are some real missed doozies: “Goodfellas,” “The Shawshank Redemption,” “The Big Lebowski,” “Blade Runner,” “Unforgiven” and more.

The Claptrap book is already more than 125% funded on Indiegogo. Its backers also believe that the classic movie parody format is a unique and valuable art form that should be saved.

This is the just-released splash page to another missed parody: Alfred Hitchcock’s “Psycho.”

Details about the book and how it came to be are part of the Claptrap campaign page on Indiegogo:

Ryan Reynolds Gets Bloody, Hangs With His Younger Self In The First Look At His Upcoming Time Travel Movie
Wolf & Badger is My New Favorite Website for Holiday Shopping
Watch Miley Cyrus Set Off Fire Alarm During Prank on Iggy Azalea
Brian De Palma’s Assistant Sam Irvin Reveals All About the Making of DRESSED TO KILL
Elvis Presley’s Honeymoon House in Palm Springs Hits Market for $2.5M