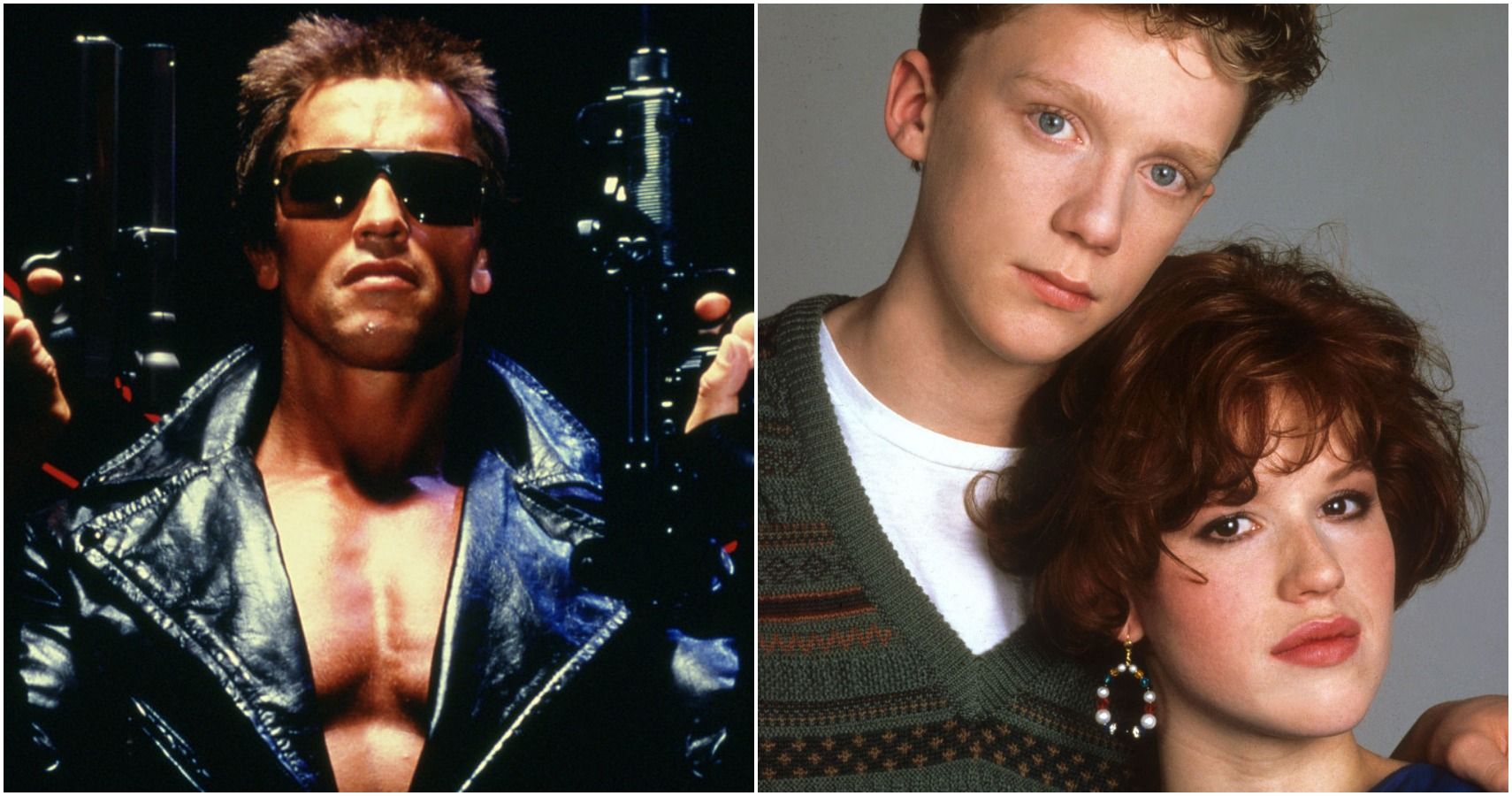 Over the past six or so decades, there have been many stand-out years in cinema that have boasted a number of classics and masterpieces. But the year that really captures the spirit of Hollywood, with big blockbusters, weighty dramas, sprawling epics, timeless comedies, and everything in between is 1984.

RELATED: 10 Most Culturally Influential Movies Of The 1980s

1984 saw the launch of a number of franchises still going strong today, with Ghostbusters, The Terminator, and The Karate Kid all debuting that year. Eddie Murphy announced his arrival as an A-list superstar with Beverly Hills Cop. Horror had a strong showing, with the arrival of A Nightmare on Elm Street and other classics of the genre. And legendary writer/director John Hughes helmed his first feature film, Sixteen Candles. Here are all the reasons why 1994 was the greatest year in film.

10 Ghostbusters and Gremlins Premiered On The Same Day

It’s really hard to believe that two absolute classics were released on the exact same day, and yet it is true. Ghostbusters and Gremlins both premiered on June 8, 1984. They would go on to incredible box office results and would endure throughout the next 35 years via sequels, animated shows, cable airings, and home video releases.

Ghostbusters finished its initial theatrical run with $229 million domestically and $295 million when re-releases and international box office are added in. Gremlins did pretty well itself, making $153 million during its two runs. Both franchises continue to thrive, with the second sequel (and overall fourth entry) in the Ghostbusters series, Ghostbusters: Afterlife, arriving this year and an animated prequel series, Gremlins: Secret of the Mogwai, landing on HBO Max in 2021.

Made on a minuscule budget of a mere $6 million, James Cameron’s true film debut came with his tech-noir sci-fi action/horror hybrid The Terminator. Released to theaters on October 26, 1984, Cameron’s film went on to an astounding $78 million worldwide.

The film, which Cameron conceived while in the grips of a fever dream while filming Piranha II in Rome, starred Arnold Schwarzenegger in the title role, launching him to superstardom. It spawned five sequels to date, with the most recent being last year’s Terminator: Dark Fate, as well as the 2008-2009 Fox TV series Terminator: The Sarah Connor Chronicles.

Prior to landing in the director’s chair, John Hughes had made his name with the successful comedies National Lampoon’s Vacation and Mr. Mom. It was his directorial efforts, however, that solidified his status as a filmmaking icon. His first effort came with 1984’s Sixteen Candles, starring Molly Ringwald and Anthony Michael Hall (it also featured John and Joan Cusack very early in their film careers).

RELATED: Who Ya Gonna Call? 10 Behind-The-Scenes Facts About Ghostbusters

The teen comedy about a girl whose family has forgotten her sixteenth birthday remains a beloved classic, despite some problematic issues of race and homophobia (it was a different era, but they definitely stick out in today’s cultural environment). Hughes would go on to direct multiple classics, including Weird Science, The Breakfast Club, Ferris Bueller’s Day Off, and Planes, Trains, and Automobiles.

Popular once again due to the success of the YouTube Premium series Cobra Kai, The Karate Kid began life as a project Columbia Pictures were interested in as a vehicle for director John G. Avildsen, the Academy Award-winning director of Rocky. Basing the film partly on his own life, writer Robert Mark Kamen created a timeless tale of an underdog, fish-out-of-water who learns a variety of life lessons along the way.

Starring Ralph Macchio and Pat Morita (who was nominated for an Oscar for his performance), the feel-good story was a hit among critics and audiences, grossing an impressive $91 million at the box office (about $225 million adjusted for inflation). Along with the Cobra Kai series, the film spawned three sequels and a 2010 remake.

Along with high profile comedies Ghostbusters and Beverly Hills Cop, 1984 also saw a number of comedies still embraced by audiences to this day. Classics such as Revenge of the Nerds, Splash, and Police Academy were released in ‘84 as well as cult hits Bachelor Party and Johnny Dangerously.

Many of these comedy gems would launch franchises of their own, with Police Academy and Revenge of the Nerds chief among them. Of course, the rise of premium cable television outlets HBO, Cinemax, and Showtime and their cycle of films certainly aided in the spread of these comedic gems into the American pop culture.

The horror renaissance that was in full swing in 1984 can be traced back to the early 1970s, with films like The Exorcist, The Texas Chainsaw Massacre and Black Christmas and moving forward through 1978’s Halloween and Friday the 13th in 1980. 1984 saw another high point in the history of horror with Wes Craven’s masterpiece A Nightmare on Elm Street releasing that year.

RELATED: All The Nightmare On Elm Street Movies, Ranked

Other notable horror films released in 1984 include the controversial classic Christmas slasher Silent Night, Deadly Night (released the same day as Nightmare), the Troma Films cult hit The Toxic Avenger, the Stephen King adaptation Children of the Corn, and the Friday film that saw Jason Voorhees meet his demise (well, for a while), Friday the 13th: The Final Chapter.

4 Prince Goes To The Movies

Musicians making the transition to film was certainly nothing new come 1984. The Beatles, Elvis Presley, Pink Floyd, and even KISS had made the move to films during their prime (although the less said about KISS Meets The Phantom of the Park, the better). However, most of those films never made a major mark in pop culture the way that Purple Rain did. Conceived by Prince during his 1999 tour, the semiautobiographical film stars Prince as The Kid, an exaggerated version of himself.

Casting many non-actors in key roles, the film told the story of The Kid’s rise through the Minnesota music scene while dealing with issues both personal and professional. Featuring original music by Prince, both the film and the soundtrack were massive successes, with the film earning ten times its budget at the box office and the album selling over 25 million copies.

After beginning his career on Saturday Night Live in 1980, Eddie Murphy began to build a strong movie resume with the comedies 48 Hours and Trading Places. In 1984, however, he finally got the chance to lead a film on his own with Beverly Hills Cop. Originally conceived as a pure action film, first for Mickey Rourke and then later Sylvester Stallone, the script was rewritten when Stallone pulled out just weeks before shooting was to begin due to budget issues.

Enter Eddie Murphy. The film’s massive success (it was the highest-grossing film of 1984 with over $234 million in box office receipts) launched Murphy to international superstardom and permanent A-list status.

At the height of Cold War hysteria came a movie about Soviet and Cuban forces invading a small town in Colorado (the movie was actually filmed in the town of Las Vegas, New Mexico), part of a larger, and unseen, start to World War III. A young band of teenagers from the town, who name themselves “Wolverines,” form a resistance against the Soviet forces.

RELATED: 20 Wild Details Behind The Making Of The Karate Kid

Directed by John Milius, fresh from his directorial turn on Conan the Barbarian, Red Dawn, with a cast that included Patrick Swayze, Charlie Sheen, and Lea Thompson, was only a modest box office success. However, its influence on film and television lasts to this day.

1 The Story That Never Ends

Children’s fare in 1984 was rather thin, with Jim Henson’s The Muppets Take Manhattan (directed by Henson mainstay Frank Oz) being one of two that really stood out. The other? A fantasy tale based on a German novel directed by Das Boot director Wolfgang Petersen.

And yet somehow, that film, The NeverEnding Story, has become a beloved classic among children of that era. Made on a rather large (for the time) budget of $27 million, the movie would make nearly four times that budget at the box office. Telling the fantastical story of a young boy named Bastian who literally gets pulled into the heroic story of young Atreyu, The NeverEnding Story resonated and continues to resonate, with fans of all ages. Just don’t bring up Atreyu’s horse Artax.

NEXT: The 10 Best 80s Fantasy Films (According To IMDb)

Shawn Pacheco is an avid writer, reader, and filmgoer based in Pueblo, Colorado. After 19 years in the television news business, he left to pursue writing and other passions. He began his writing career in May 2018 with Horror Geek Life and has expanded to also write for Valnet, Inc, as a writer for Screen Rant. A graduate of Stanford University, Shawn has been a lifelong fan of movies, television, pro wrestling, the Oakland Raiders, pop culture, and Stephen King. And he will go toe-to-toe with anyone in Friday the 13th trivia.

Film Review: The Return of the Living Dead (1985)
Black Man Who Was Almost Lynched Thinks Federal Response is Insincere
Superstore: Amy Sosa’s Best Moments
Chilling Adventures of Sabrina to End with Season 4 on Netflix
It Part 2: Updates, Facts and Rumors (The Return of Pennywise?)