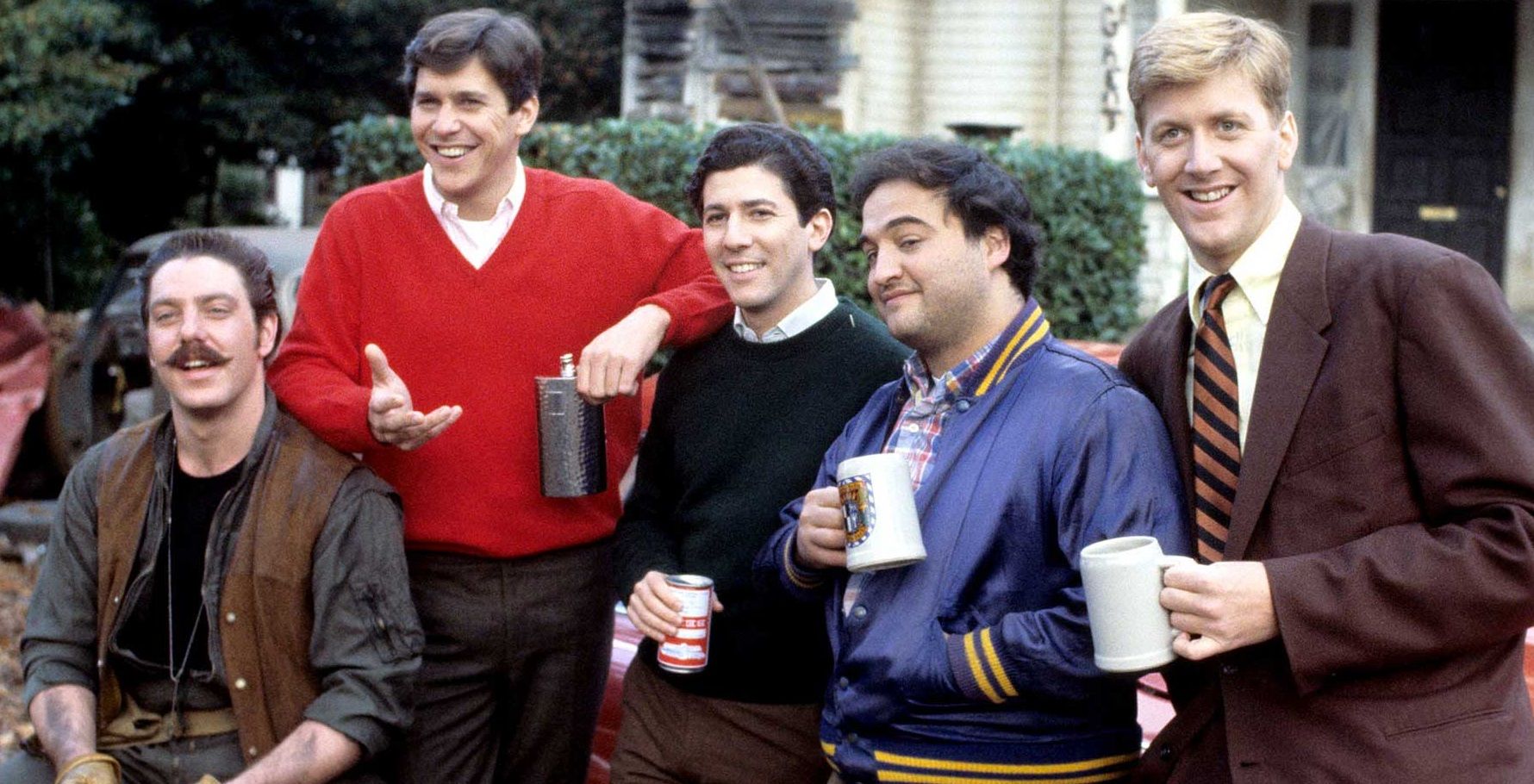 RELATED: Anchorman: The 10 Most Memorable Quotes From The Legend Of Ron Burgundy

No studio expected it to do well, and then pretty much overnight, it became the highest-grossing comedy movie of all time. It’s since been surpassed for that record, but only by comedies it inspired.

Updated on May 29th, 2020 by Ben Sherlock: National Lampoon’s Animal House remains one of the most beloved comedies ever made. With a brilliant performance that defined John Belushi’s comedic persona and a jam-packed script by some of the greatest comedy writers of all time, Animal House is a lot funnier than your average comedy. It was an unprecedented box office hit when it was first released, and it holds up surprisingly well today. There’s no shortage of hysterical lines in Animal House, so we’ve updated this list with a few new entries.

When Otter says, “What a tool,” in front of Dean Wormer, and Wormer asks him to repeat what he said, he claims that he said, “What a shame that a few bad apples have to spoil a good time for everyone by breaking the rules.”

Unimpressed by Otter’s antics, Wormer replies, “Put a sock in it, boy, or else you’ll be outta here like sh*t through a goose.”

Donald Sutherland is one of the most respected actors who ever lived, but he also proved he has an untapped funny bone with his portrayal of Professor Jennings in Animal House.

As he tells his students, he refuses to pretend that he’s a fan of Milton: “I find Milton probably as boring as you find Milton. Mrs. Milton found him boring, too. He’s a little bit long-winded, he doesn’t translate well into our generation, and his jokes are terrible.”

One of the most iconic scenes in Animal House sees Bluto piling up his tray in the cafeteria and then disgusting the people around him with his eating habits.

At one point, he says, “See if you can guess what I am now,” before cramming some mashed potatoes into his mouth, hitting his cheeks with his fists, and spraying mashed potatoes everywhere. He says, “I’m a zit! Get it?”

11 “If You Mention Extortion Again, I’ll Have Your Legs Broken.”

During a meeting with the mayor about the homecoming parade, Dean Wormer overplays his hand with hilarious results. Dean Wormer tells the mayor, “I don’t think it’s right that you should extort money from the college.”

Then, the mayor replies, “Look, these parades you throw are very expensive. You use my police, my sanitation people, and my Oldsmobiles free of charge. So, if you mention extortion again, I’ll have your legs broken.”

This quote from the Neidermeyer character is universally applicable. It’s not something you’d get away with saying to a group of people, but if a bunch of people were getting on your nerves, this would be a great shutdown.

Neidermeyer isn’t a character that anyone should want to be like, because he’s a total jerk and one of the film’s main antagonists, but sometimes, it would be fun to just yell out, “You’re all worthless and weak!”

9 “Was it over when the Germans bombed Pearl Harbor? Hell no!”

Note: It’s funny because Japan bombed Pearl Harbor, not Germany. When it seems as though Dean Wormer and the other frat have won, D-Day says, “War’s over, man. Wormer dropped the big one.” And then Bluto steps up to rally the troops. He’s the last guy you’d expect to be the one who inspires everyone to go into battle and emerge victorious, but that’s exactly what he does. He takes a break from necking entire bottles of Jack Daniel’s and riding motorcycles in the house and says, “What? Over? Did you say ‘over’? Nothing is over until we decide it is! Was it over when the Germans bombed Pearl Harbor? Hell no!”

8 “I think that this situation absolutely requires a really futile and stupid gesture be done on somebody’s part.”

This Otter quote became so memorable that A Futile and Stupid Gesture was used as the title of the Netflix biopic based on the life of Doug Kenney, the guy who co-founded the National Lampoon and co-wrote Animal House. His monologue about what they should do to get back at the bad guys is hilarious: “We gotta take these b*****ds. Now, we could fight ‘em with conventional weapons. That could take years and cost millions of lives. Oh, no. No, in this case, I think we have to go all out. I think that this situation absolutely requires a really futile and stupid gesture be done on somebody’s part.”

7 “My advice to you is to start drinking heavily.”

The way that society has panned out, the comedy that remains timeless is the comedy that can be distilled down into memes, whether it’s a scene or a quote or a character. Most new fans are discovering shows like It’s Always Sunny in Philadelphia and Bob’s Burgers by coming across the memes that viewers have created from scenes and lines from the show. John Belushi’s immortal line, “My advice to you is to start drinking heavily,” has been turned into a very popular meme, and it has ensured that Animal House remains a known chapter in the history of comedy.

6 “As of this moment, they’re on double secret probation!”

Dean Wormer is the character who made everyone think that the deans of colleges are just fusty, old, white men who despise anything close to fun. Of course, deans in real life aren’t too bad (The Simpsons played on this trope hilariously in the episode “Homer Goes to College”).

RELATED: The 10 Most Memorable Student/Principal Rivalries in Movies

Their aversion to fun is a symptom of their aversion to hazing scandals and drink and drug-related deaths on campus. Dean Wormer is a particularly bad example. He explains, “There is a little-known codicil in the Faber College constitution which gives the dean unlimited power to preserve order in time of campus emergency…The time has come for someone to put their foot down. And that foot is me.”

5 “Christ. Seven years of college down the drain. Might as well join the f**king Peace Corps.”

John “Bluto” Blutarsky is an accurate depiction of a guy we all knew in college – the guy who never goes to any classes or gets any good grades and drinks a lot more than everyone else. He’s also totally unpredictable and never fails to make everyone laugh, which is why they keep around (and don’t confront his problems). He’s an all-round great character. And his crushing realization is a painfully relatable moment that a lot of us have when we realize we wasted our college education: “Christ. Seven years of college down the drain. Might as well join the f**king Peace Corps.”

The food fight scene from Animal House was recreated at a St. Louis Saints game last year when 8,000 baseball fans erupted into a food fight to celebrate the 40th anniversary of the movie. That’s a show of how iconic it is, and how the whole movie has come to be defined by that scene. It’s crass, it’s loud, it’s childish – and it’s absolutely hilarious. A couple of the guys chase John Belushi’s Bluto character around the cafeteria until he eventually starts a mass food fight to get them off his back. It does work, as it creates anarchy and gives him a chance to escape.

Otter gets pretty spiritual when he’s talking to Boon about the girl he wants to sleep with at their upcoming party. Boon has a few guesses before finally guessing the right one: “Marlene! You’re gonna pork Marlene Desmond!” Confused by such a violent and ugly term, Otter asks, “Pork?” Then Boon clarifies, “You’re gonna hump her brains out, aren’t you?” and Otter explains to him, “Boon, I anticipate a deeply religious experience.” We’ve heard college guys use a lot of different terms and phrases to describe sex, but never before have we heard a college guy describe it as “a deeply religious experience.”

When Dean Wormer is telling the guys their grades, he goes around the room: “Mr. Dorfman – 0.2. Fat, drunk, and stupid is no way to go through life, son. Mr. Hoover, president of Delta House – 1.6. Four Cs and an F. A fine example you set. Daniel Simpson Day has no grade point average. All courses incomplete. Mr. Blutarsky – 0.0. Now, I want you to tell Mr. Stratton and Mr. Schoenstein exactly what I’m about to tell you right now.”

Then he adds, “You’re out! Finished at Faber! Expelled! I want you off this campus at 9:00 Monday morning! And I’m sure you’ll be happy to know that I have notified your local draft boards and told them that you are now all, all eligible for military service.”

The toga party is a staple of colleges everywhere, but it was immortalized by Animal House. When the guys decide to have a toga party in their frat house, they just start mindlessly chanting, “Toga! Toga! Toga!” They know exactly what they’re talking about and they’re all equally excited. Boon tries to get his girlfriend Katy to go with him and she doesn’t want to go, because she expects it to be a hive of sex, but Boon assures her, “It’s not gonna be an orgy! It’s a toga party.” That’s not what the event is about. It’s about wearing a bedsheet and having a good time.

NEXT: 10 of the Absolute Funniest Quotes From Bridesmaids


Next
Supernatural: 5 Characters Who Were Underused (& 5 Who We Saw Too Much Of)

Ben Sherlock is a writer, filmmaker, and comedian. In addition to writing for Screen Rant and CBR, covering a wide range of topics from Spider-Man to Scorsese, Ben directs independent films and takes to the stage with his standup material. He’s currently in pre-production on his feature directorial debut (and has been for a while, because filmmaking is expensive). Previously, he wrote for Taste of Cinema and BabbleTop.