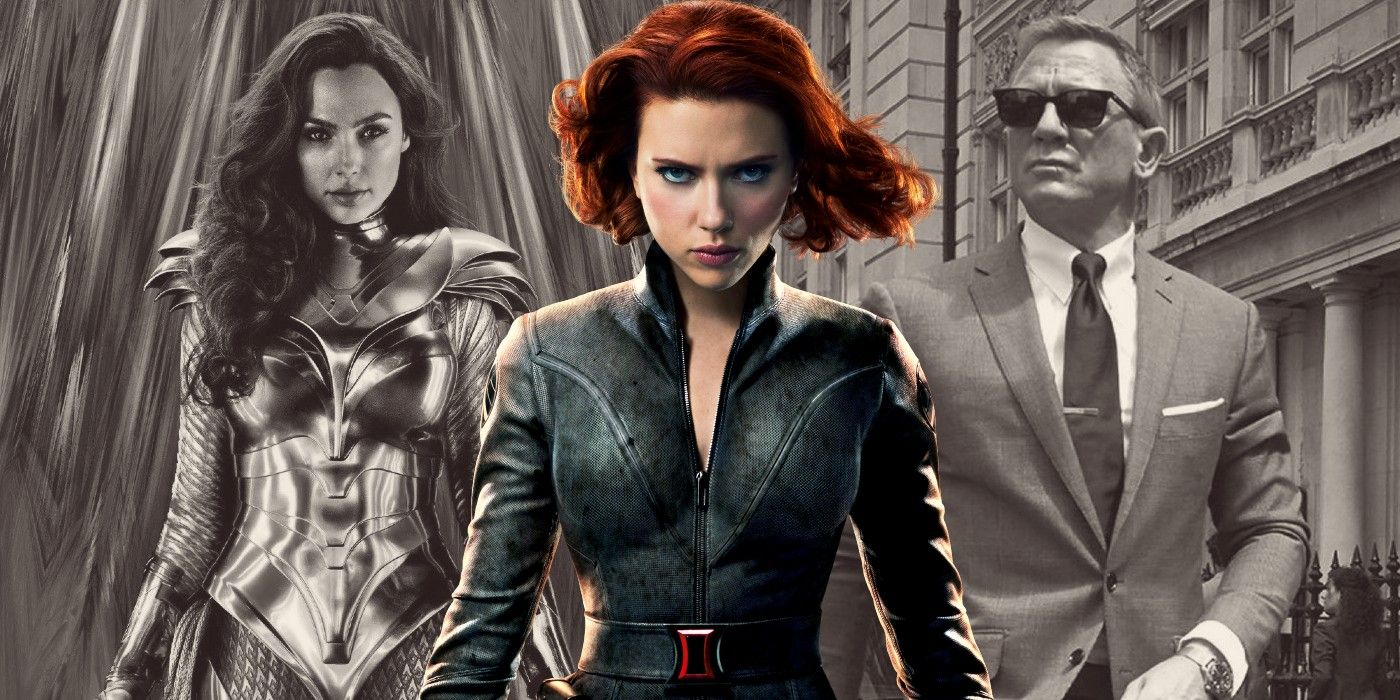 Get ready for everything that’s coming in 2020 with our movie release date calendar. With Phase 4 of the Marvel Cinematic Universe getting underway and Star Wars taking a break until 2022 (as far as films go), 2020 is shaping up to be an interesting time for movies. It’s also coming on the heels of a year that saw Avengers: Endgame unseat Avatar as the all-time highest grossing release and Disney secure a firm grip on the box office, save for a handful of smash-hits like Joker and IT Chapter Two.

The Mouse House is in a great position to dominate the 2020 box office as well, but will have to do battle with hotly-anticipated DCEU tentpoles, several buzzed-about horror movies, and even some comic book adaptations that are neither Marvel nor DC-related. And if all that wasn’t enough, Daniel Craig will also be taking his long-awaited final bow as James Bond in the months ahead. It goes without saying, but there are a lot of films to keep track of this year – which is where we come in.

Related: Every Superhero Movie Coming in 2020

Enter Screen Rant’s 2020 Movie Release Date Calendar. Obviously, there are going to be changes coming in the months ahead, but (as always) we’ll strive to keep this list as up to date as possible.

The Grudge (January 3) - This American reboot of The Grudge franchise follows a detective (Andrea Riseborough) as she investigates a mysterious death.

Underwater (January 10) – Kristen Stewart costars in this sci-fi horror thriller, which revolves around a team of researchers whose subterranean laboratory is damaged by an earthquake.

Like a Boss (January 10) – Tiffany Haddish and Rose Byrne plays best friends-turned business partners whose company is threatened by a bigger competitor in Miguel Arteta’s comedy.

Bad Boys for Life (January 17) – Mike Lowery (Will Smith) and Marcus Burnett (Martin Lawrence) reunite for one last ride in the third entry in the Bad Boys franchise.

Dolittle (January 17) - The famous John Dolittle (Robert Downey Jr.) must use his ability to speak to animals to save a gravely ill Queen Victoria in this historical fantasy adventure.

The Gentlemen (January 24) – An American expat (Matthew McConaughey) tries to cash out on the lucrative Britain-based marijuana empire he built in Guy Ritchie’s latest crime-caper.

The Turning (January 24) – Mackenzie Davis plays a nanny who’s hired to care for two strange orphans in this 1990s-set re-imagining of Henry James’ horror novella, The Turn of the Screw.

The Rhythm Section (January 31) – Blake Lively plays a woman who becomes an assassin in order to hunt down the people responsible for killing her family in this action-thriller.

Gretel & Hansel (January 31) – This horror-flavored retelling of the Hansel & Gretel fairy tale stars Sophia Lillis as Gretel and Alice Krige as the evil witch who lives out in the forest.

Birds of Prey (And the Fantabulous Emancipation of One Harley Quinn) (February 7) – Margot Robbie’s Harley Quinn joins forces with a group of female superheroes to battle an evil crime lord (Ewan McGregor) in this sequel-spinoff to Suicide Squad.

Fantasy Island (February 14) – This horror-flavored reimagining of the original TV series (which ran from 1977-84) comes from Blumhouse and writer-director Jeff Wadlow (Truth or Dare).

The Photograph (February 14) – A series of love stories from the past and present intertwine in this romantic drama. Issa Rae, Lakeith Stanfield, Chelsea Peretti, and many more star.

Downhill (February 14) – Julia Louis-Dreyfus and Will Ferrell play a married couple who re-examine their priorities after nearly being killed by an avalanche in this english-language remake of the Swedish dramedy Force Majeure.

Emma (February 21) – Anya Taylor-Joy stars as Emma Woodhouse in this romantic period drama based on Jane Austen’s novel of the same name.

Brahms: The Boy II (February 21) – A sequel to surprise 2016 horror hit The Boy, with Katie Holmes taking over for The Walking Dead‘s Lauren Cohan in the lead role.

The Invisible Man (February 28) – A woman (Elisabeth Moss) comes to believe her abusive ex-boyfriend faked his death in this reboot of the classic Universal horror franchise.

Wendy (February 28) - Ben Zeitlin’s followup to Beasts of the Southern Wild takes place on a mystical island where aging and time no longer function the way they’re supposed to.

Onward (March 6) – Pixar’s animated comedy follows two elf brothers (Chris Pratt and Tom Holland) as they search for magic in their suburban fantasy world, in order to bring their father back for a day.

The Way Back (March 6) – Ben Affleck stars in this drama as a washed-out basketball star and recovering addict who tries to get back on his feet by becoming a high school basketball coach.

First Cow (March 6) – Adapted from Jonathan Raymond’s historical novel The Half Life, this drama follows a loner and cook (John Magaro) who travels west and joins a group of fur trappers.

Bloodshot (March 13) – Vin Diesel plays a murdered soldier resurrected as a superhero (via nanotechnology) in this big screen adaptation of the Valiant comic book series.

The Hunt (March 13) – A politically charged Blumhouse horror film, The Hunt was pulled from 2019 release due to controversy, but eventually emerged from the shadows.

I Still Believe (March 13) – Singer-songwriter Jeremy Camp (KJ Apa) meets and falls in his love with his first wife shortly before she’s diagnosed with terminal cancer in this biographical drama.

Trolls World Tour (April 10) – Poppy (Anna Kendrick) and Branch (Justin Timberlake) must stop the rock-obsessed Queen Barb (Rachel Bloom) from destroying all other kinds of music in this animated sequel.

Scoob! (May 15) – Scooby-Doo and the Mystery gang set out to solve their latest crime in this computer-animated reboot of the traditionally 2D animated Hanna-Barbera property.

The Lovebirds (May 22) – Kumail Nanjiani and Issa Rae play a couple on the verge of breaking up when they find themselves caught up in a bizarre murder mystery in this romantic comedy.

The King of Staten Island (June 12) – Judd Apatow directs Pete Davidson in this comedy-drama, which is loosely based on the events of Davidson’s real-life upbringing.

You Should Have Left (June 19) – Kevin Bacon and Amanda Seyfried play a married couple that ends up taking a vacation into psychological terror, in this horror film from Stir of Echoes helmer David Koepp.

Greyhound (July 10) – Tom Hanks plays a career officer who’s finally given command of a destroyer, the USS Greyhound, during WWII in this adaptation of C.S. Forester’s nautical book, The Good Shepherd.

The Informer (July 31) - Adapted from the novel Three Seconds, this crime-thriller stars Joel Kinnaman as a reformed convict who goes undercover in prison for the FBI.

The One and Only Ivan (August 21) – A gorilla named Ivan (Sam Rockwell) who lives in a cage at a mall tries to improve his fellow animals’ quality of life in Disney’s adaptation of the K.A. Applegate novel.

Bill & Ted Face the Music (August 28) – The now middle-aged Bill (Alex Winter) and Ted (Keanu Reeves) struggle to finally write the song that will bring peace to earth and the universe in this comedy sequel.

The New Mutants (August 28) – Disney-Fox’s long delayed adaptation of the X-Men spinoff comic book series follows a group of young mutants who’re imprisoned in a secret facility against their will.

The King’s Man (September 18) – A secret spy organization is formed to battle the worst tyrants and criminal masterminds in history in this prequel to the previous Kingsman movies.

Antebellum (September 18) – A mysterious Lionsgate horror film that appears to at least partially be about a successful modern black woman being transported back to the days of slavery in America.

Candyman (October 16) – Jordan Peele co-wrote this film, which is described as a spiritual sequel to the previous entries in the Candyman slasher horror franchise. Yahya Abdul-Mateen II and Teyonah Parris star.

The Trial of the Chicago 7 (October 16) – Aaron Sorkin directs this drama about the real-life trial connected to the countercultural protests at the 1968 Democratic National Convention in Chicago.

Death on the Nile (October 23) – Hercule Poirot (Kenneth Branagh) must unravel a murder mystery aboard a steamer on the Nile river in this quasi-sequel to 2017’s Murder on the Orient Express adaptation.

Connected (October 23) – The Mitchell family’s road trip is interrupted by a technological uprising that threatens all of humankind in this Sony Pictures animated comedy.

Fatale (October 30) – Michael Ealy plays a married man who is tricked into becoming part of a murder scheme by a seductive female police detective (Hilary Swank) in this crime-thriller.

Come Play (October 30) – A monster named Larry uses electronic devices to invade the real world in this adaptation of an acclaimed horror short.

Clifford the Big Red Dog (November 13) – A young girl is shocked when her beloved puppy Clifford grows up to be an enormous dog in this film adaptation of the beloved children’s book series.

Soul (November 20) – The soul of a middle school music teacher (Jamie Foxx) who dreams of being a jazz musician is accidentally separated from his body and sent to “soul school” in this animated Pixar comedy.

Happiest Season (November 25) – Clea DuVall directs this romantic dramedy about a young woman who plans to propose to her girlfriend, but discovers she hasn’t come out to her conservative parents yet.

Voyagers (November 25) – Colin Farrell stars in this sci-fi film from Divergent director Neil Burger, in which 30 men and woman are sent on a long-term mission to find humanity a new home.

The Empty Man (December 4) – A traumatized an ex-police officer turned investigator (James Badge Dale) pursues a missing girl in this supernatural horror-thriller based on the Boom! Studios graphic novel.

Coming 2 America (December 18) - Zamunda Prince-turned King Akeem Joffer (Eddie Murphy) discovers he has a son in America he never knew about in this sequel to the hit 1988 comedy film.

The Croods 2 (December 23) – Prehistoric cave family The Croods are back for another adventure in this sequel to the animated DreamWorks movie featuring Emma Stone, Nicolas Cage, and Ryan Reynolds.

News of the World (December 25) – Paul Greengrass directs this adaptation of Paulette Jiles’ book about a traveling newsreader (Tom Hanks) tasked with bringing an orphaned girl to her relatives in the wake of the U.S. Civil War.

TBA 2020 (Delayed Due to Coronavirus)

Malignant – James Wan co-wrote and directed this original horror film, which is described as being a murder-mystery in the tradition of the 2oth century Italian Giallo genre.

Promising Young Woman - Carey Mulligan plays a woman living a secret double life by night who gets the chance to right the wrongs of her past in this thriller from writer-director Emerald Fennell (Killing Eve).

Rise – Sterling K. Brown stars in this true story-based drama, which revolves around a janitor who coaches a middle school basketball team and ends up taking them to the championship.

Stillwater  – Tom McCarthy cowrote and directs this drama about a father (Matt Damon) who travels from Oklahoma to France to help his daughter (Abigail Breslin) when she’s arrested for murder.

Those Who Wish Me Dead – Sicario‘s Taylor Sheridan directs this neo-western thriller about a murder witness being hunted by twin assassins, starring Angelina Jolie, Nicholas Hoult, and more.

The Woman in the Window – An agoraphobic child’s psychologist (Amy Adams) believes she may’ve witnessed a murder in Joe Wright’s adaptation of the mystery-thriller novel by A. J. Finn.