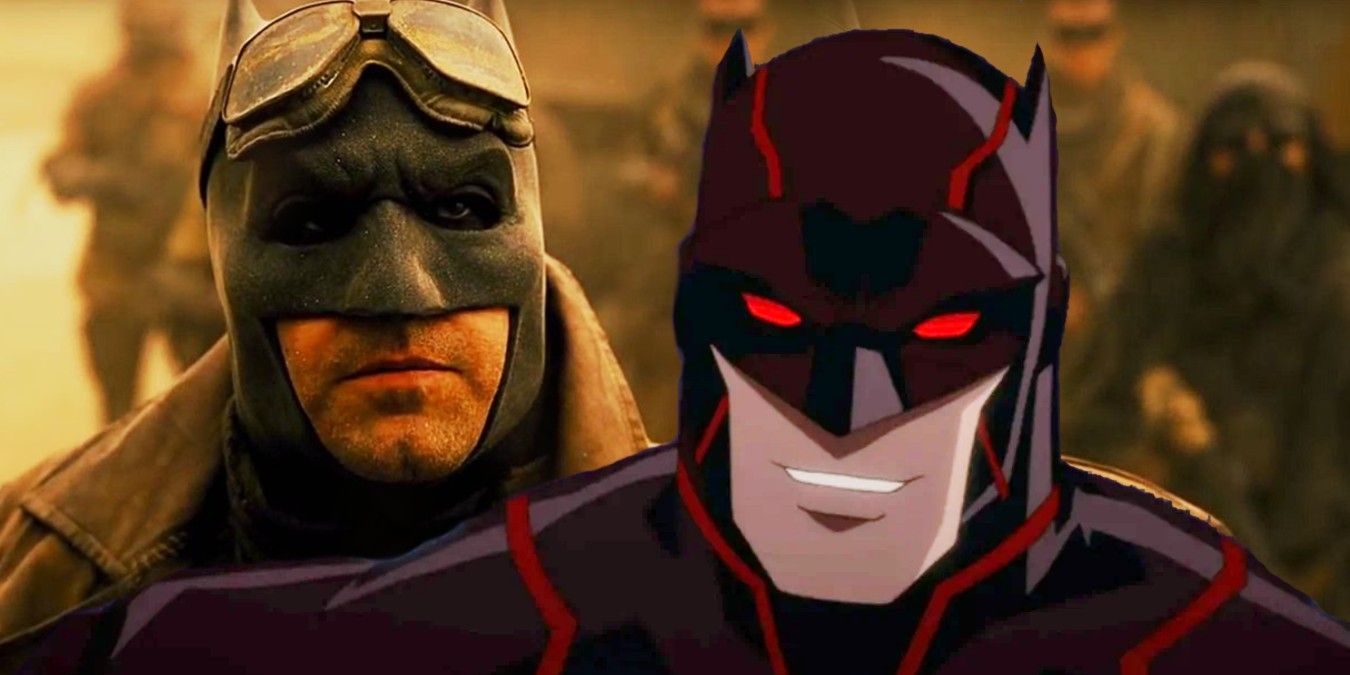 Justice League Dark: Apokolips War is shockingly close to the Knightmare future of Zack Snyder’s DCEU, albeit with Batman and Superman’s respective roles in it swapped. The final chapter of the DC Animated Movie Universe, Apokolips War finds Earth being torn asunder following the failed attempt of several teams of the world’s superheroes to pre-emptively stop Darkseid’s planned invasion, with many either being killed or co-opted into Darkseid’s service. Two years after Darkseid’s victory, the survivors join forces with the Suicide Squad in a last ditch effort to free Earth from the rule of Apokolips once and for all.

Apokolips War is about as intense and mature as any animated movie DC has ever produced, and it is unquestionably the most unapologetically violent one as well. However, what really stands out about Apokolips War is how tonally and visually in sync it is with Zack Snyder’s live-action DC films. The overall structure of Apokolips War mirrors the grand scale of Snyder’s approach to superhero movies, but even more surprisingly, it also follows the template of the Knightmare sequence in Batman v Superman: Dawn of Justice, which was planned to be further explored in Snyder’s subsequent DC movies, but switches the roles that Batman and Superman occupy in it.

In Apokolips War, Darkseid nullifies the threat of Earth’s surviving heroes by injecting liquid Kryptonite into Superman, illuminated on his chest in the form of his classic ‘S’ shield, to keep his powers at bay. Superman, in turn, is one of the instrumental leaders in planning the uprising against Darkseid, along with Raven and John Constantine. This role of leading mankind’s rebellion against Darkseid is the very role Batman plays in Snyder’s Knightmare future, with The Flash’s Batcave appearance in Batman v Superman showing the first attempt by the survivors of the Justice League to prevent this future from happening. However, this is only half of the animated movie’s inversion of what Snyder’s vision of the Knightmare entailed.

Snyder had intended to fully explain the Knightmare as the end result of Superman falling victim to the Anti-Life Equation after Darkseid’s murder of Lois Lane, causing him to join forces with Apokolips and leading to Earth’s downfall. In Apokolips War, numerous heroes like Wonder Woman and Martian Manhunter are made into Furies for Darkseid, but Batman’s role in this regard directly parallels Superman’s in the Knightmare. After the initial loss to Darkseid, Batman becomes his mentally enslaved right-hand man, aiding him in mining the core of the Earth while keeping tabs on the planet from the Mobius Chair.

This is far from the only point of commonality between Apokolips War and the unseen portions of Snyder’s planned five-part DCEU story. However, the movie is unmistakably reflective of the Knightmare in how it flips the roles played by The Dark Knight and The Man of Steel in the battle against Darkseid’s conquest. Whether it was planned from the outset for the movie to homage Snyder’s DC films so heavily isn’t clear, but in doing so, Justice League Dark: Apokolips War also manages to put its own spin on one key aspect of the Knightmare that he had envisioned.

NEXT: Justice League: Everything Revealed About Zack Snyder’s Knightmare Plan

Growing up, Brad developed an innate love of movies and storytelling, and was instantly enamored with the world of adventure while following the exploits of Indiana Jones, Japanese kaiju, and superheroes. Today, Brad channels his thoughts on all manner of movies, from comic book films, sci-fi thrillers, comedies, and everything in between through his writings on Screen Rant. Brad also offers philosophical musings on martial arts and the filmographies of everyone from Jackie Chan to Donnie Yen on Kung Fu Kingdom, where he’s also had the privilege of interviewing many of the world’s great stunt professionals, and hearing plenty of gripping stories on injuries incurred in their line of work and the intricacies of designing the acts of death defiance he first thrilled to as a youngster. When he’s not writing, Brad enjoys going on a ride with the latest action hit or Netflix original, though he’s also known to just pop in “The Room” from time to time. Follow Brad on Twitter @BradCurran.

REZZ Reveals New Single Out Next Week, Just In Time for Halloween
What to Watch: The Undoing, This Is Us, Christmas Movies Galore!
On the Rocks Review: Sofia Coppola & Bill Murray Rivetingly Reunite
Jennifer Aniston Says Don’t Vote Kanye West, ‘It’s Not Funny’
Jennifer Aniston Casts Ballot for Joe Biden and Implores People Not to Vote for Kanye West: ‘It’s Not Funny’