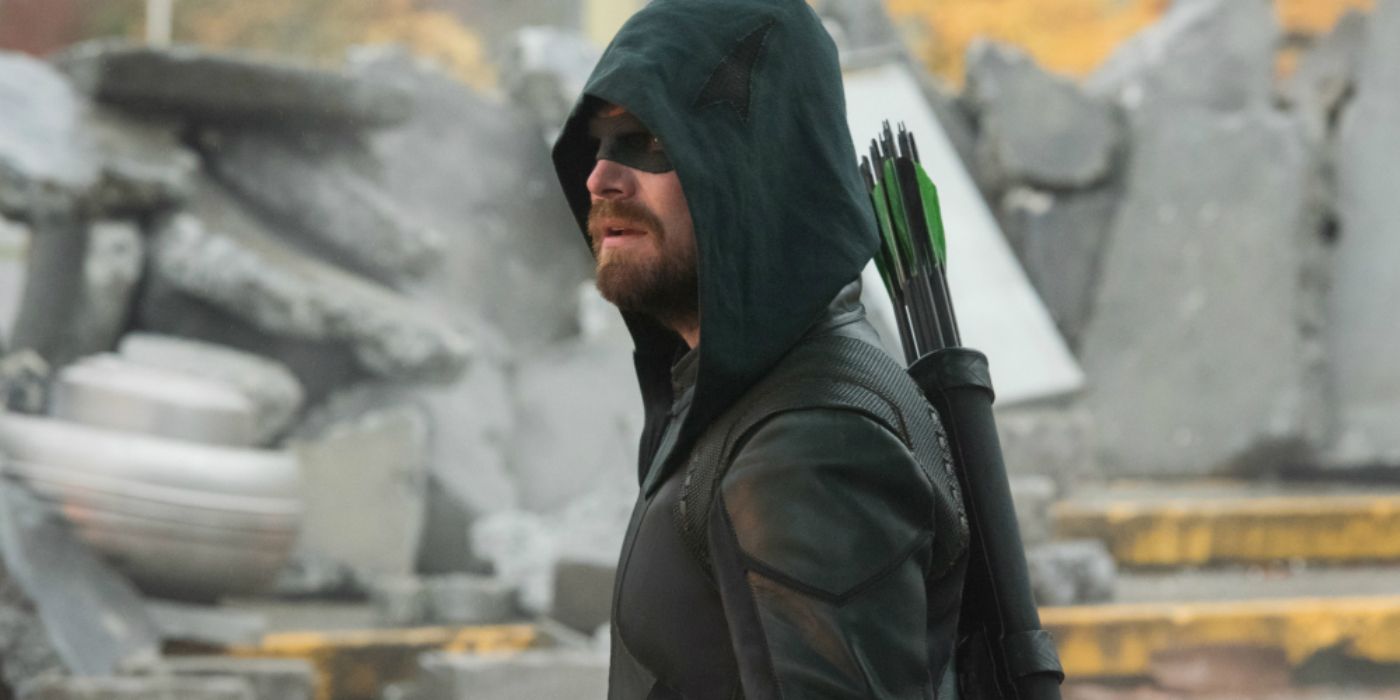 Arrow star Stephen Amell shared his struggles with anxiety-induced panic attacks after literally suffering through one while recording a podcast. After eight successful seasons, the Arrow star announced last year that he wanted to leave the show, ending the series, to spend more time with his family. With the final episode set to air next week, the CW star sat down to discuss his conflicted feelings over the show ending, and the pressure he was under playing the show’s titular character. Unbeknownst to the show’s star, when he initially joined Michael Rosenbaum for the Inside of You podcast, he was already experiencing early symptoms of a crippling panic attack.

Rosenbaum is no stranger to superhero shows: he’s best known for playing Lex Luthor on Smallville, although he’s been reluctant to return to the spandex-clad world. Instead, he’s focused on his podcast which has been building steam since it launched in 2018. Part of the show’s success comes from the host’s natural ability to relax his celebrity guests just enough to encourage them to open up about their personal struggles. While some of his guests openness can be attributed to their personal relationship to the host (many of them are his friends), it’s also thanks to Rosenbaum’s willingness to share his own struggles with mental health issues. This combination of relationship and receptiveness lead to perhaps his most brutally honest discussion about mental health yet: with Amell.

Stephen Amell’s interview on Inside of You (via People) began by discussing the show’s finale and the impact it had on the star’s mental health. He revealed that he’s been having a hard time processing his emotions, and that he’s been feeling “mentally exhausted” since the series wrapped. To highlight his exhaustion, the actor said that the first couple of days after the show ended he spent “on the couch” unable to even eat. As the conversation delved further into Amell’s mental state, he described feeling very “hot” and “sweating,” an early warning sign of an impending anxiety attack. Rosenbaum attempted to get water and Tylenol for Amell, but the actor complains of “feeling sick” before cutting the entire interview short and declining a ride home. “I just kind of want to walk,” explained a weary Amell.

After a short break, Rosenbaum explained that Amell returned to the show to finish the interview two weeks later. A newly rejuvenated Amell admits he probably “should’ve canceled” the initial interview since he hadn’t fully “disconnected” enough from his conflicting emotions over Arrow‘s conclusion. The actor also revealed that after leaving the podcast, he returned home, wrapped himself in a blanket and, “was freezing but just sweating bullets.“

Thankfully, after some professional counseling, and many discussions with his wife, Amell was able to drill down on the roots of the issue: a lack of physical exercise and a strong emotional attachment to Arrow, the show he had just ended. Amell explained that prior to their initial recording he had visited a doctor about his physical ailments only to be told that there was nothing wrong with him. Upon realizing that all of what he was feeling was “in my head,” Amell hurried to record the podcast without processing everything he had learned – resulting in the actor’s body just sort of throwing in the proverbial towel.

I did Rosey’s podcast after Arrow ended. We had to cut it short because I had a full on panic attack. It wasn’t pretty. I came back a few weeks ago to chat about it. I was in a really bad spot and I’m happy to report that I’m doing much better. Listen please :) https://t.co/bpnUDqtQZN

Inside of You, debuts new episodes every Tuesday. Amell, after a much-needed break, will return to the small screen in Heels, a new Starz series that is about men and women chasing their dreams in the world of small town pro wrestling. And, of course, Arrow comes to an end next week on The CW.

More: Arrow Finale’s Last Scene Is So Complicated It May Not Even Happen