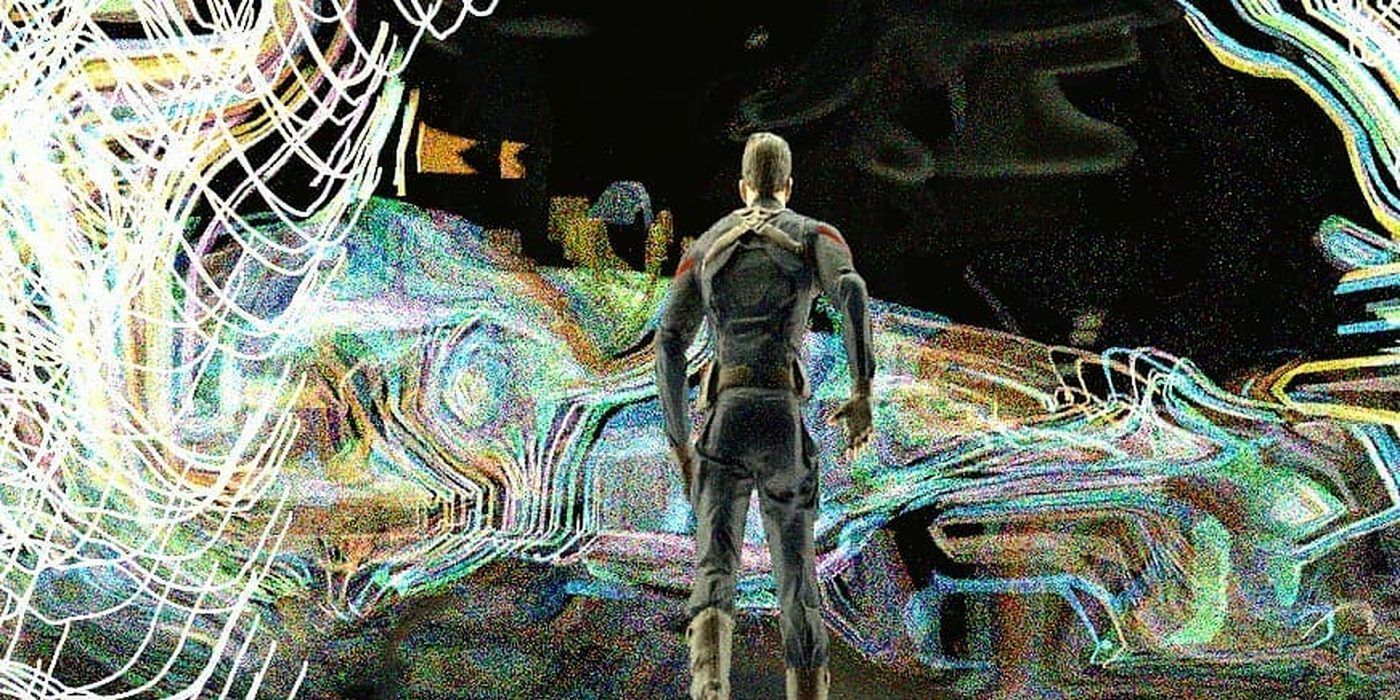 Avengers: Endgame concept art reveals a trippier look at Quantum Realm time travel in the Marvel Cinematic Universe. In 2015’s Ant-Man, the Quantum Realm is described as a place where the concepts of space and time become irrelevant. Fans got their first glimpse of the place’s mind-bending visuals when Scott Lang goes subatomic to defeat Darren Cross’ Yellowjacket. The Quantum Realm also makes a brief appearance in 2016’s Doctor Strange and then plays a pivotal role in 2018’s Ant-Man and the Wasp.

Lang escapes the Quantum Realm thanks to a rat accidentally activating the Quantum tunnel in 2019’s Avengers: Endgame. From Lang’s perspective, he had only been trapped for 5 hours when, in reality, five years have passed. This distortion of space and time is the basis of Lang’s “time heist” pitch to Steve Rogers and Natasha Romanoff, suggesting that they use the Quantum Realm to retrieve the Infinity Stones from the past and snap all of Thanos’ victims back into existence. With the help of Tony Stark and Bruce Banner’s “big brains,” the Avengers perfect their time travel mechanics; using Pym particles and Stark’s model of an inverted Möbius strip allows them to shrink down and travel the Quantum Realm to different points in time.

Before all of this made it to the big screen, Marvel Studios had more than a couple of options for what time travel using the Quantum Realm would look like. Stephen Schirle was one concept artist who worked on Avengers: Endgame, who recently posted some abstract images of Quantum Realm time travel to his Instagram. A few pieces of his artwork can be seen below:

Time travel in Avengers: Endgame is much different than other films. To quote Scott Lang, “so, Back to the Future is a bunch of bullsh*t?” What the Avengers do in the “past” does not alter the present but instead creates branching realities. That said, the Quantum Realm is a dimension in the Multiverse (which is why it is shown in Doctor Strange). The larger implications of this are not only seen in Avengers: Endgame (ex. Loki escaping with the Tesseract/Space Stone) but will also be present throughout Phase 4 of the MCU.

While Schirle’s images are much different than what ended up in Avengers: Endgame, they are certainly appropriate. The Quantum Realm itself is an abstract place; therefore, the weirder, the better. As the MCU further explores the Multiverse in Disney+ shows like Loki and WandaVision or films like Doctor Strange in the Multiverse of Madness, things will undoubtedly become even more trippy than this concept art.

More: How MCU Phase 4 Will Be Shaped By The Quantum Realm

Pirates of the Caribbean 6: Why Disney Is Rebooting The Franchise
Related Topics

Josh Plainse is an author, journalist, avid reader, movie and television fanatic based out of Wisconsin. After graduating from the University of Wisconsin Oshkosh with a BA in English, he embarked on a career as a freelance writer, providing content for a number of different websites, including Bookstr.com, Mandatory.com, and Comingsoon.net. Josh works for Screen Rant covering the latest in entertainment while simultaneously pursuing the never-ending dream of becoming an established novelist and screenwriter.

Josh would accredit characters such Goku, Han Solo, Simba, and Maximus Decimus Meridius for not only teaching him how to be a man but instilling within him an affinity for storytelling. It is this incessant obsession which has propelled him to seek opportunities that inform, entertain, and inspire others. Beyond that, he enjoys the occasional Spotted Cow (shout-out to New Glarus Brewing Company), doing push-ups, and wearing jean jackets on Tatooine.

SHARK ISLAND – Teaser Poster + First Details!
R.I.P. Trini Lopez, “If I Had a Hammer” Singer and Guitar Designer Dies at 83
The PondHawks’ New Song “Invisible Stranger” Gives Hope During Pandemic
Nick Cannon Says Kanye West Has His Vote for President
How Cassadee Pope Found Her Voice For Her Most Personal Album Yet